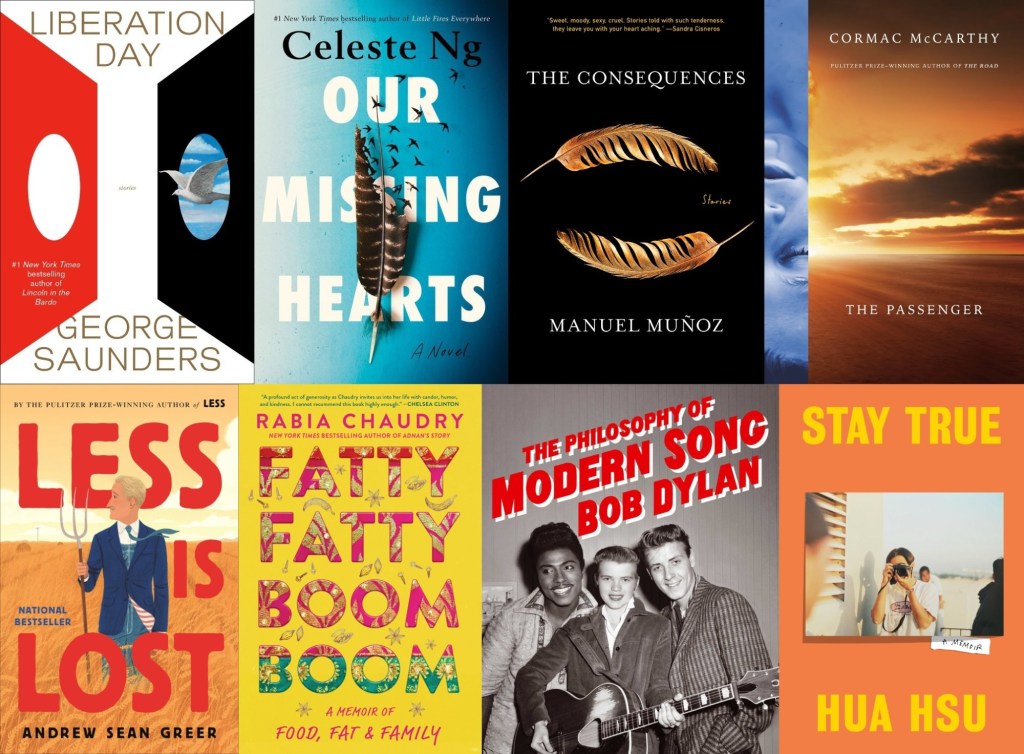 Don’t look now – you don’t want to scare her – but fall is on its way, after a brutal summer we’d probably all rather forget about. There’s something else to look forward to besides cooler temperatures, though: the new season brings a variety of books for all types of readers to get lost in.

Related: Sign up for our free newsletter about books, authors, bestsellers and more

The next few months will see the release of non-fiction books with topics ranging from American music to a former US president, and fiction dealing with themes of loss, love and family. Here are 17 upcoming books you might want to spend some (hopefully) chilly days and nights with.

What it’s about: Greer won the Pulitzer Prize for ‘Less,’ his hilarious 2017 novel about a 50-year-old novelist who travels the world after finding out her ex-boyfriend is getting married. In the sequel, Greer’s hero escapes again, this time across the United States after facing the death of an ex-lover and an unexpected financial obligation he prefers to forget.

What it’s about: Australian post-punk legend Cave suffered an unimaginable loss in 2015 when his teenage son Arthur died after falling off a cliff. Then her eldest son, Jethro, died earlier this year. Cave addresses grief and art in his latest book, which takes the form of a series of conversations he had with journalist and longtime friend O’Hagan. A special audio version of the book features musical codas from three of Cave’s albums.

What it’s about: The highly anticipated debut work of fiction from Diné author Louis takes readers to and around Flagstaff, Arizona. The characters in this short story are ordinary people – blue-collar workers and would-be artists – doing their best to survive in a world indifferent, and sometimes hostile, to their existence.

“Runaway: Notes on the Myths That Made Me”

What it’s about: Salon.com editor Keane, known for her razor-sharp cultural analysis, dives deep into her family’s history in this memoir from acclaimed independent press Belt Publishing. The book tells the story of his mother, who ran away from home at the age of 13 and hitchhiked across the country; Keane mixes his mother’s story with his own exploration of pop culture and family stories.

What it’s about: Lawyer Burnham examines the systems that allowed Southern whites to terrorize black people — with the implicit and explicit blessing of the law — for decades in the Jim Crow era. Burnham’s book, recently named a Kirkus Prize finalist, seems likely to provide more context for the national conversation on racism, just as Ibrahim X. Kendi’s “Stamped from the Beginning” did in 2016.

What it’s about: New York writer Hsu, who grew up in Cupertino, reflects on his unlikely college friendship with a young man who couldn’t have been more different: when Hsu was an independent kid with a taste for zines, his friend Ken was a member of the mainstream rock fraternity. Hsu’s memoir tells the story of their relationship and how Hsu turned to writing after Ken was killed in a carjacking.

“Confidence Man: The Making of Donald Trump and America’s Collapse”

What it’s about: The most anticipated political book of the fall arrives a month before Election Day. In her new book, New York Times journalist Haberman, who has shown her ability to get inside scoops on Trump, chronicles the former president’s life and career. Expect revelations from the book to start leaking to the press in the weeks leading up to its release – along with criticism that Haberman may have withheld information in the public interest for use in his book.

What it’s about: The ‘Everything I Never Told You’ and ‘Little Fires Everywhere’ author returns with a novel that tackles some of the country’s most pressing issues. It follows Bird, a 12-year-old whose Chinese-American mother disappeared years ago; the boy navigates a dystopian America marked by racism, nativism and book censorship in order to find her.

“It starts with us”

What it’s about: Prolific Texas-based novelist Hoover became a publishing phenom last year thanks to her popularity on TikTok. Her latest novel, about a recently divorced woman who starts dating her first love, follows “It Ends With Us,” the book that made her famous on the video-sharing app in the first place.

What it’s about: Dinuba-born Muñoz wowed readers with his short story collections “Zigzagger” and “The Faith Healer of Olive Avenue” as well as his novel “What You See in the Dark.” The stories in his new book — his first in 11 years — follow farmhands and their families in central California in the 1980s. Two of the stories collected here have already received O. Henry Awards, making them a good bet for fans of incisive short fiction.

What it’s about: You may have seen the affable Saunders during one of his appearances on his friend Stephen Colbert’s late-night show; he is one of the most charming ambassadors of literary fiction. His latest work is a collection of short stories, the genre for which he is best known; it is his first fiction book since his 2017 Booker Prize-winning novel “Lincoln in the Bardo”.

“The passenger” and “Stella Maris”

What it’s about: The legendary American author of ‘All the Pretty Horses’ and ‘No Country for Old Men’ hasn’t published a novel since 2006’s ‘The Road’. Now he’s back with two d ‘between them, exploring the life of a brother and sister come to terms with the legacy of their father, who invented the bomb used to destroy Hiroshima. Every new work by McCarthy is an event; the release of two of his novels is expected to dominate literary conversation this season.

“The World We Create”

What it’s about: A new book by four-time Hugo Jemisin award-winning author is always a hit in the sci-fi/fantasy world. Her latest novel, about a group of ‘avatars’ – human representations of New York’s five boroughs – battling a powerful and mysterious enemy, follows her acclaimed 2020 fantasy novel ‘The City We Have Become’.

“The Philosophy of Modern Song”

What it’s about: Dylan won the 2016 Nobel Prize in Literature thanks to his enduring songs, but the Minnesota man also knows prose – his 2004 book ‘Chronicles: Volume One’ is one of the best memoir american musicals. In his new collection of essays, he sets out his thoughts on American popular music, writing on topics including bluegrass, heavy metal and Elvis Costello.

What it’s about: At the height of the pandemic, six acclaimed young authors banded together to write “Blackout,” a celebration of love and joy among young black people set during a summer heatwave At New York. They’re back with “Whiteout,” but this time the setting is a snowstorm in Atlanta. It’s a safe bet that this one, like its predecessor, will find fans outside of its intended young adult audience.

What it’s about: Lawyer and author Chaudry hit the bestseller list in 2016 with ‘Adnan’s Story,’ about her friend Adnan Syed, the subject of the hit ‘Serial’ podcast whose case is always up to date. Her new memoir is a reflection on her relationship with the Pakistani food she loves, as well as her struggle with her own body image, which took a hit when she was teased by friends and family when she was child.

Book Finds: Summer Reads You Can Take Into Fall | KCUR 89.3