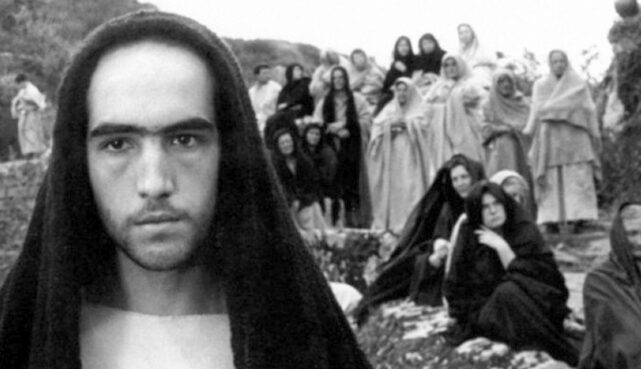 There have been countless cinematic interpretations of the books of the Bible, but few have stood the test of time. One that qualifies as a classic is Pier Paolo Pasolini’s 1964 “Il Vangolo Secondo Matteo” (The Gospel According to Saint Matthew).

Considered by the Vatican to be one of the best film adaptations of any of the Gospels, Pasolini’s 1964 film was shot in the regions of Calabria, Puglia and Basilicata. In an interview with RAI television while in Matera, Pasolini explained the reasons for filming there. “I chose two or three places in Basilicata. One is Barile, a town of Albanians. I needed a place for Bethlehem. Another place is Matera because it reminded me of Jerusalem,” he explained.

Pasolini’s interpretation of the Gospel of Saint Matthew is pure, without any added commentary. He said he followed the Gospel word for word without adding a single syllable. He explained in the interview that his idea to make the film came about by chance. “In October 1962, I was in Assisi on the exact day that Pope John XXIII arrived in Assisi. All the events and the confusion surrounding the Pope’s visit caused a traffic jam. Thus, I was forced to stay at home with my guests who belong to the Pro Civitate Christiana of Assisi. Held inside idly, I took the Bible from the table and began to read. I started with Saint Matthew because it was the first, then came the trauma of history. Then I read the others, but the intense trauma that gave me the idea for the film came from Saint Matthew. So I stayed true to that first feeling of inspiration.

Spanish actor Enrique Irazoqui was chosen for the role of Jesus. He was only 18 when he landed the role. He was in Rome at the time of casting. Acquaintances arranged a meeting between him and Pasolini. When Pasolini saw Irazoqui, he immediately knew he had found his Christ.

I had the opportunity to interview Irazoqui just months before he passed away in 2019. We spoke via Skype. His memories were tender and nostalgic. He spoke with great enthusiasm and a touch of humor as he described this unforgettable, life-changing experience.

FRA NOI: What emerges from your working memory on this emblematic film and more particularly from the shooting in the Sassi of Matera?

ENRIQUE IRAZOQUI: Matera has become Jerusalem. We spent about a week to 10 days filming there. In the Sassi of Matera, I experienced a bit of irony on the set because when we were filming, every 10 or 15 minutes of each day, seeing that I was dressed in Christ, wearing the clothes of Christ, some men and women, when I spoke with the apostles, asked me if I could perform a miracle for them. I didn’t know how to work miracles. I said, ‘I am not the Christ. I am an actor who embodies Christ.’ They understood nothing. They didn’t understand anything because the difference between an actor and the one I played didn’t exist for them. After dinner, I went for a walk with Saint John the Evangelist and smoked. They got mad at me and said, ‘My God, you didn’t smoke!’ »

FN: Do you have a special memory, something that you will always hold close to your heart?

EI: Yes, definitely. Something exceptionally special is Elsa Morante. Elsa Morante is my first image of “The Gospel according to Saint Matthew”. And then there is also Pasolini, Pier Paolo Pasolini.

FN: How has this role changed your life?

FN: Why do you think this 1964 film is still so popular and relevant today?

EI: I don’t know. I think maybe, and I’m not sure, it’s because of the Vatican. The Vatican said there has never been a Christ like mine depicted in a movie.

It should be noted that to this day Irazoqui is still much adored in Basilicata for this role, and the city of Matera made him an honorary citizen. “The Gospel According to Saint Matthew” is available to stream on Amazon, iTunes, Vudu Vimeo and YouTube.

Follow this link to watch our Skype interview. https://www.youtube.com/watch?v=GQapCCaAdmo&t=1s