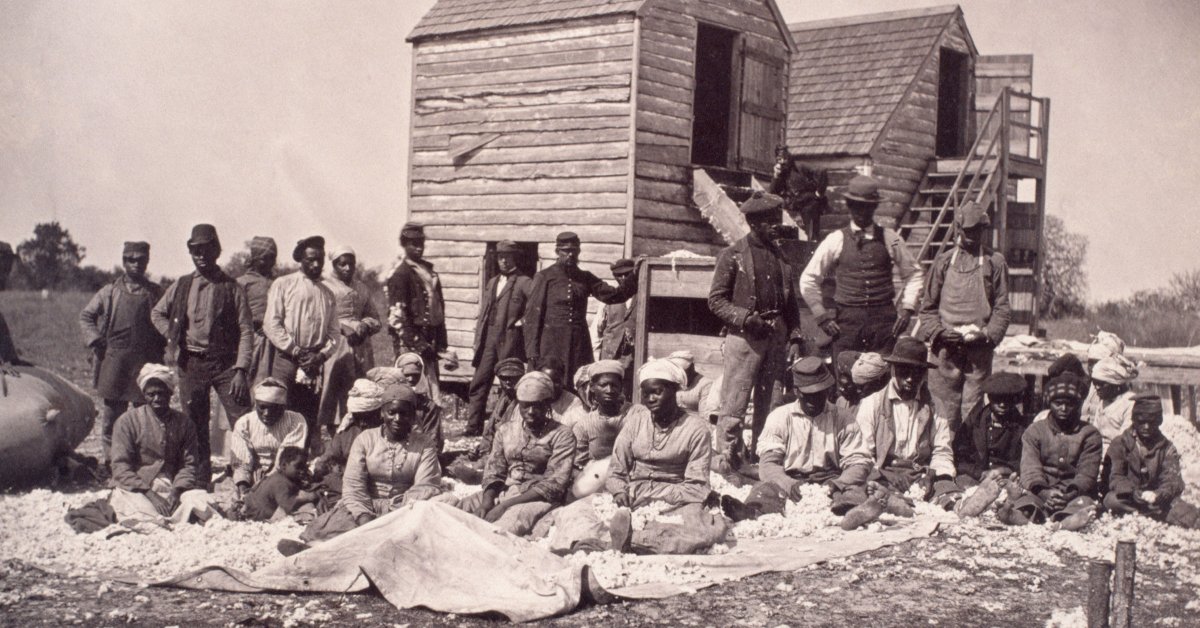 America must heed the long and violent end of slavery

“Dad said he was proud of his freedom, but he was afraid to own it.”

Susan High was born after the Civil War, but she recalled her father’s attitude for an interview with the Federal Writers’ Project (FWP) in the late 1930s. The memory her father, George Merritt, passed on to her was that of the perilous conditions under which the 4.5 million slaves of the South experienced emancipation. News of President Abraham Lincoln’s Emancipation Proclamation, issued on January 1, 1863, may have sparked joyous celebrations among those whom the document now proclaimed “free forever,” but some, like Merritt, were concerned, and Because.

While the proclamation effectively ended slavery in all areas of the Confederacy in active rebellion, the executive order excluded slave states that remained in the Union—Kentucky, Delaware, Missouri, and Maryland—as well as controlled areas. by the US military, such as the Sea Islands and much of the Mississippi Delta. It would be two full years before the Confederacy surrendered, and several more until the 13th, 14th, and 15th Amendments legally dismantled slavery in these excluded areas and established the foundations of civil and political rights for Black Americans. Even then, their ability to openly embrace freedom and pursue their own desires and destinies would be severely limited by a number of factors, including white hostility, as well as the federal government‘s growing indifference to their struggles.

But if the Emancipation Proclamation were to become a first step in the nation’s “new birth of freedom,” the U.S. military would have to win the Civil War, a proposition that in 1863 was anything but certain. The proclamation was intended to address this uncertainty. Although Lincoln proclaimed his decree an “act of justice”, the Emancipation Proclamation was an act of war. Citing his powers as Commander-in-Chief, Lincoln justified the release of enslaved people in areas of active rebellion as a means of stripping the Confederacy of an important component of its war effort. The slaves not only performed manual labor for the southern army, but they also maintained the farms, plantations, and other industries that provided the rebellion with much-needed food production and other materials. Their forced labor freed southern white men to fight.

The continued presence of slaves also provided white Southerners at home with great symbolic assurance of Confederate justice and the promise of its ultimate triumph. But when slaves began to free themselves from their farms – what black historian WEB DuBois called the “general strike” – the fantasy of slave owners quickly began to evaporate.

In newspapers and correspondence, slaveholders expressed shock and indignation that the people they believed were bound to serve them for life had abandoned them at the first chance they had. Catherine Edmondson, the wife of a North Carolina planter, was nonetheless impressed by the large, orderly and determined group of 100 or more refugees who left her home shortly after the U.S. military successfully landed a force on the nearby Outer Banks in 1862. “They seem to be so methodically observed and so well piloted that the idea that it was a panic seems to be losing ground,” she confided in her diary. It was as if they had been planning their departure for some time.

Lincoln understood the psychological impact the proclamation would have on southern morale and hoped it would encourage more enslaved people to join the revolution already underway, either by abandoning their Confederate owners or enlisting in the American forces, because nearly 200,000 slaves and free-born black men would do.

But the war made it dangerous for people to “own” their freedom, as George Merritt reminded his daughter. The memories of other former slaves contained in FWP interviews reveal how the soldiers sent to free the enslaved population of the Confederacy were a source of hope as well as concern. It is important to keep this in mind as we continue to grapple with the legacy of the Civil War for American society. Taking into account the existence of slavery also requires that we take into account the long and violent end of slavery.

Alice Green, who was enslaved in Georgia, and Hannah Brooks Wright, enslaved in Mississippi, both described Union soldiers as “bluebirds” because of the color of their uniforms. More than three-quarters of a century later, Frank Larkin cherished his memory of mounted American soldiers riding proudly and proudly on their horses:

“It was the most beautiful sight I have ever seen.”

American soldiers brought the news of freedom to the Confederate countryside, but they also brought destruction. When the soldiers confiscated Confederate livestock and food stores for sustenance, they jeopardized the material existence not only of the rebel slavers, but also of the slaves who depended on those supplies.

“The Yankees sure threw us in the heather,” recalls Violet Guntharpe, who found herself scavenging for acorns in the nearby woods after Union troops visited her South Carolina farm in recent years. weeks of war. “All we had to thank them for was a hungry belly and freedom.”

White soldiers were often indifferent to the suffering caused by their presence. Sam Word’s mother was outraged to find a white Union soldier ransacking her cabin and taking her precious quilts. When she chided him for stealing from the very people he was supposed to fight for, he snapped:

Lizzie McCloud hid on the porch from a soldier who seemed to have more in mind than pigtails. She watched the man’s boots as he paced back and forth calling her, “Get out, Dinah!” Dinah, we are fighting to free you from bondage!

Like “Sambo”, a caricature of enslaved men in white popular culture, “Dinah” was a generic name for enslaved women. In the book of Genesis, Dinah was also the name of Abraham’s granddaughter who was kidnapped and raped by the Canaanites.

In her interview, McCloud never explicitly says what she feared the soldier would do to her, but her apprehension as she tells the story is palpable. Rape and the threat of rape have always been powerful tools for any army, and Civil War armies, both northern and southern, were no different. The Emancipation Proclamation did nothing to reduce the risk and, in fact, may have increased it.

Rape was not just a tragic consequence of war, but a powerful symbol of Union victory. When a Union soldier raped an enslaved woman, they sent a message to the slavers about their diminishing authority. “Such public acts of sexual violence served to demonstrate power over black women, to threaten white women, and to mark the defeat of the South,” says historian Crystal Feimster.

In most cases, the physical presence of the US military in rural areas has often been short-lived. Once they were gone, the old ways continued as before. An enslaved person who did not recognize this fact faced harsh consequences.

As he walked through his neighborhood, a Union soldier ordered young Eliza Evans that her master should call her “Miss” now that she was free. Emboldened by the news, Evans did as he was told. When she relayed the soldier’s order to the white man, however, he whipped her with a switch. When her grandmother heard how she had spoken to their owner, she also whipped the girl.

Evans’ grandmother may seem heartless to 21st-century readers, but her reaction reveals an essential pragmatism shared by former slaves, including Martin Jackson’s father, who warned him against fleeing to join “the Yankees”. Jackson’s father told him the war wasn’t going to last forever, “but our eternity was going to be spent living among the Southerners, after they got licked.”

It was the hard lesson George Merritt had learned when, after the war, his former owner drove him and his family away without any support.

The white southerners may have been defeated, but they were rebellious. In the lean years after the war, many of them seemed to exist only because of the revenge they felt for the people they had so recently possessed – and, in almost all cases, they still believed they should. White landowners may have had no choice but to agree to pay freedmen wages for the labor they once forced with the whip, but they found new ways to secure themselves. they paid as little as possible. If a released person complained, they were often met with violence.

When Sylvia Parker saw her former employer, a white man named John Lawrence, on the street in Wilmington, North Carolina, she asked him about the money he owed her for the job she had done the previous year. Lawrence denied he owed her anything. She insisted he did, telling him that “he didn’t do well with her.” Furious that a black woman had publicly questioned her integrity, Lawrence picked up a nearby stick and began hitting her on the head and arms.

The FWP interviews are filled with similar emancipation stories, ones that run counter to the “Jubilee” scenes we often associate with the Emancipation Proclamation. These first-hand accounts remind us that there was no escaping the fact that emancipation in the United States was an act of war. The Emancipation Proclamation, and by extension the U.S. military, destroyed much of the economic and political apparatus of slavery. This destruction touched the lives of slaves in profound and sometimes tragic ways.

After the guns fell silent, recently enslaved slaves struggled to rebuild their lives amid the physical and emotional devastation of war. Generations of slaves had prayed for deliverance, but when it finally came, the price it demanded was high.

Patsy Moore recalled both the jubilation and sadness that came with the freedom of people she knew in Mississippi. “When freedom came, people left the house, in the streets, crying, praying, singing, shouting, shouting and spilling everything,” she told FWP. “Then comes calm. It was sad then. So many dead people. Things tore apart and nowhere to go and nothing to eat, nothing to do.

“Aunt Elsa took me home to my parents because I was a sleepwalker. I wanted to have more children” – Corriere.it