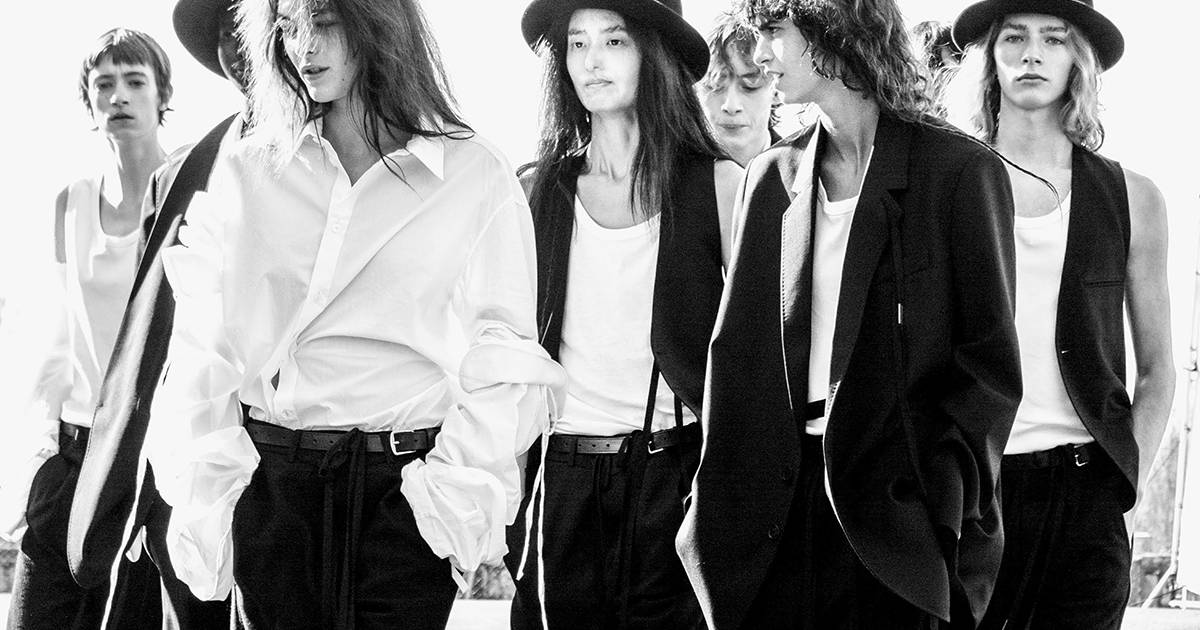 Ann Demeulemeester has changed owners, returned to the catwalk in October with a new creative team and will be a special guest at the Pitti Uomo fashion fair in Florence in January. Demeulemeester herself resigned in 2013, but says she is satisfied with the brand’s new journey.

Ann Demeulemeest between future and past

Things haven’t been going so well for the Ann Demeulemeester label for a while. Since the departure of the legendary creator in 2013, the brand has been looking for new energy, without much success. Artistic director SÃ©bastien Meunier, a veteran of Demeulemeester, tried to reach a younger audience, however, with the exception of a small fan base, never really succeeded in convincing. In addition, the brand had lost quite a few traditional customers in recent years, often because they felt the quality had deteriorated.

Plus, it just wasn’t a good time for the label. Demeulemeester’s dark and romantic gothic essence stood out against the garish, poppy streetwear of the decade.

The brand’s change of command in 2020 therefore came as no surprise. However, the Belgian label now being Italian – and conceived in Milan – could arouse curiosity. The company, now owned by entrepreneur Claudio Antonioli, thanked Meunier for his proven service even before the takeover. The line has since been designed by an internal team.

The change of course was approved by Demeulemeester. In addition, the designer is once again involved in the brand, even if she will no longer design collections.

â€œWe have an agreement with Ann for the next ten years,â€ Claudio Antonioli confirmed to FashionUnited in September. “I’d rather not say too much. A little mystery is allowed to stay around this.”

â€œI see my role as enriching DNA in new areas and other forms,â€ Ann Demeulemeester added in an email. “The style of ‘Ann Demeulemeester’ is clear enough. A new team can continue to work without me.”

Patrick Robyn, longtime husband and creative partner of Demeulemeester, was also nominated by Antonioli. He led the refurbishment of the flagship store in Antwerp, the only remaining store in Demeulemeester. Located in the southern district of the city, housed in a former seafaring school dating from the 1860s, the store reopened in September this year.

â€œThere is not the slightest regret or frustration with us,â€ said Robyn during a visit to the store, referring to the sale of BVBA 32 in 2013. â€œWe have made our dreams come true. We are happy with this. when we stopped it was certainly not a failure. Ms. Chapelle had her own ideas, and of course we have also seen that the brand has stumbled towards the abyss in recent years. didn’t like it. At some point, Claudio Antonioli came out as a kind of deus ex machina, [an unexpected saviour]. He’s been a bit of a saving grace for the brand. “

Claudio Antonioli opened his first self-proclaimed boutique in Milan in 1987. â€œI was already selling Ann Demeulemeester at that time,â€ he told FashionUnited via Zoom. “It wasn’t long after that I got to know Ann and Patrick better. I have always been a fan.”

During this time, Antonioli had stores in Milan, Turin, Lugano and Ibiza, and Volt, a club in Milan. He was also a co-founder of New Guards Group (NGG), the group behind labels such as Off-White, Palm Angels and Ambush. NGG was sold to e-commerce giant Farfetch a few years ago, and Antonioli himself is no longer involved.

â€œWhen I heard that Ann Demeulemeester was for sale,â€ he said, â€œI called Ann and Patrick. It seemed like a great opportunity to be able to continue the adventure and, with the time, reconnect with growth. “

Antonioli has concluded two transactions, one being a takeover of BVBA 32 de Chapelle, the logistics structure behind the label. With Demeulemeester and Robyn he made an agreement for the brand name.

â€œThe name stuck with us back then,â€ noted Robyn. â€œIn the meantime, we also had a licensing agreement with the company Serax, for porcelain, tableware and lamps. We are also continuing along this path. Mr. Antonioli now owns the name Ann Demeulemeester for everything fashion related.

â€œJust buying the company,â€ said Antonioli, â€œdidn’t interest me. I also absolutely wanted the name. I don’t want the brand to change completely. In my opinion, that’s not my name. brand. I work for Ann Demeulemeester. There is no rush either. But I want to prepare the brand for the future. Fashion is not made for the seventies. Fashion speaks to people in our twenties and thirties, and we want to reach them. In keeping with Ann Demeulemeester’s DNA. ”

At this time, there will be no official art director to head the design team. “It is still too early for that,” said Antonioli.

“To be clear, there is no intention of Ann designing clothes again,” said Patrick Robyn just before the flagship reopened. “I don’t have a crystal ball, of course. The future takes some strange leaps in the future, so who knows. But at the moment, there’s no indication that Ann will return as a designer.”

In the Antwerp flagship store, in addition to the clothing collections, tableware, lamps and, soon, Ann Demeulemeester’s furniture will be sold. “We want to show his full vision, his universe,” said Claudio Antonioli. “Ann Demeulemeester is now a lifestyle brand. It should be clearly visible in the store.” If all goes as planned within two to three years, the location should serve as a model for new boutiques in fashion cities like Paris and Milan.

“A moment of emotion” for Ann Demeulemeester

Meanwhile, the label returned to the catwalks. After a fashion film in March, a parade took place during Paris Fashion Week in October. Olivier Rizzo, known for his work with Raf Simons and Prada, among others, did the styling, while Demeulemeester herself was in the front row.

“It was exactly thirty years ago that I gave my first show,” she then told FashionUnited, during a chance meeting at the Gare du Nord. â€œAt the time I opened it with a piece of clothing that said: Parents, tell your children your dreams. Parents, tell your children about your dreams. This text is back now. moment: the first time I was on the other side of the curtain, so to speak. I haven’t been to fashion week since I quit in 2013. “

She continued, â€œThe casting was amazingly good, the makeup, the styling. I wanted a lot of clothes for myself. Also, if you looked closely, and it was possible because the audience was so close to the catwalk, you could see it everything was well done. It was also necessary to get the brand back on track. In recent years the collections were no longer produced in Italy, but now they are again, often by manufacturers with whom I was working myself.

On January 12, Ann Demeulemeester – the label – will exhibit at Florence’s Pitti Uomo, Stazione Leopolda, the disused train station where, in the past, Raf Simons and Undercover, among others, have presented collections. Celebrate the story of Ann Demeulemeester “, says the official invitation. During a lunch in Antwerp, Lapo Cianchi, communications officer at Pitti, clarified that the show for a small audience would be followed by a DJ set. that, of course, the latest covid -19 wave could still throw a wrench in the works.

â€œWe have always loved Ann Demeulemeester’s style, both for her non-conformist approach and for her ability to establish herself serenely but resolutely on the international scene. The label’s new path, initiated by a visionary entrepreneur like Claudio Antonioli, engages in an ideal dialogue with the founder and her standards. We are honored to return to Florence to a story that began forty years ago, in 1982 (the year Demeulemeester graduated from the Academy of Antwerp; the label was founded 1987, NVDR). The event created for Pitti Uomo 101 will be an exchange between different forms of creative expression, with a particular focus on the younger generations. It will be a synchronized story, between future, present and past. “

In addition to Demeulemeester, Pitti Uomo hosts special events for classic menswear brands Caruso and Kiton. American label Filson will also be present, celebrating its 125th anniversary – and the first collection of a European licensing deal with WP Lavori in Corso, the Italian group behind Woolrich, Barbour and Baracuta, among others. The 101st edition of the show takes place from January 11 to 13.

This article originally appeared on FashionUnited.NL. Translation and editing by: Rachel Douglass.

The best-selling books of 2021