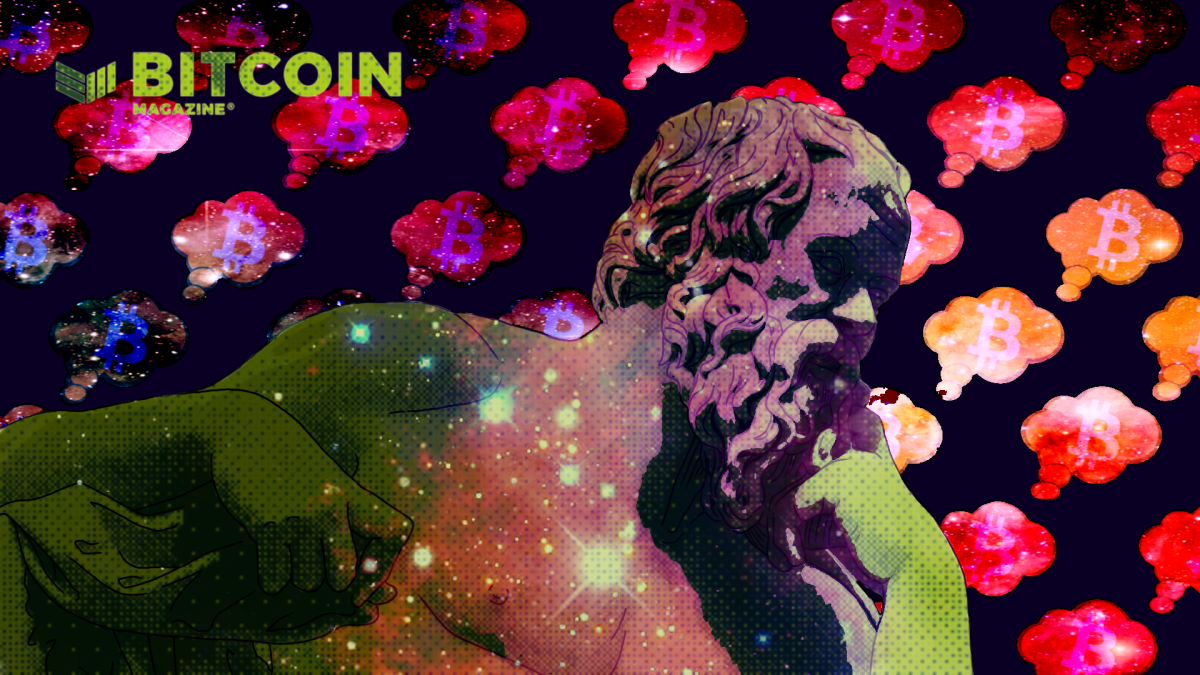 Throughout history, many means of exchange have disappeared. Assuming that this money, as we know it today, also disappears? The world wouldn’t miss him for a single day, for his demise alone would reveal that he had been replaced by something possibly much better. We can no longer bear the sight of it; therefore, we began to abolish cash, just as we once abolished slaves without completely abolishing their trades.

Denying, destroying and inventing have almost always gone hand in hand. It seems that from the moment we are born, a part of nonconformity mingles with us in all things. It is as if we come into the world with a duty to honor the old foundations, but without giving up the right to tear them down in order to rebuild them; as if the first thing life teaches us is that a lot of things have to fall apart in order to be able to build a lot more. Perhaps there is not a single creator who is not also a destroyer, or at least who does not have a highly unconventional and skeptical mind, a brain addicted to great progress, who above all also wants the means to get it. Non-conformism, for the creator, is characteristic of the upward march of the development of the mind, which is why he always wishes to find a new form of maturity on earth and does not content himself with having eyes to see without a mouth. to say that it can also be seen in another way. In his case, it is natural for him to live thinking: I learn it because it can be taught, I seek it because it can be found, and I change it because it can be improved. . He understands better than anyone that at all times, in all places and in all fields evil still dominates, and that good is generally the rare; that we owe the slowness of progress to inconsiderate respect for old customs, old laws and old human prejudices.

“The most hated are the creators: because they are the most radical destroyers”, Nietzsche, Posthumous Fragments III, 3, 1, 30.

Unfortunately, man almost always succumbs to inventions he does not deserve, so that it is not enough for the creator to bring something new: he must also know how to transform people so that they understand and seriously accept. People, at least in this respect, are a lot like children, who don’t appreciate receiving the same benefits over and over again. Moreover, if it were up to the masses, all revolutionary ideas would be banned, we would still live under thatched roofs, we would plow with oxen, donkeys and cows, and the invention of the machine. water would be blamed. to be able to flood our homes.

This is of course why good inventions always fail first, because of those who are not able to profit from them, who do not even feel compelled to study them in order to understand them, and who, if they marvel at their discovery, do not tolerate the idea that they do not occupy any place in their brain. It is a very vulgar habit to find the hand of the devil behind the excellence of what human beings create. All that is old naturally tends, by all means, to destroy and erase from life all that is new, the sight of which horrifies him deeply, because he hates it in the same way that eunuchs hate. those who enjoy. This is why the execution of any new idea is generally so laborious, its growth so slow and its excellence so remote, that its parents almost always die before seeing it. It is exactly the same with this as with good books, which need time to be understood, while those written for fairs speak loudly one day, only to be forgotten the next. The best thought, in fact, is the one that takes the slowest and lastest to take effect, so much so that it seems to be an indisputable law of the universe that great things must be credited late. So, if there is anything more costly to the creator than having to start, it is having to start knowing that he has to convince others, generally opposed to all thought and all creation: two occupations which have never done mankind any harm.

Although, anyway, if there is anything that time tells us, it would be that it is easier to slow down the universe than to stop something useful and new once it does. has been set in motion: that nature is not the enemy of change. , but enjoys it to such a degree that it is itself an alternation of indeterminate cycles; that those who oppose the new and the extraordinary are as far behind those who invented it as those who tell the story are further removed from those who were its protagonists; that one day he will have to be as posterity which could not be so contemporary; and that the creator, in general, likes to think that his creation enjoys the sympathy of a handful of intelligent people who, in a time of mental servility, dared to have their own way of thinking.

“Afraid of the novelty itself, do not dismiss the explanation from your mind, but rather by a penetrating judgment, weigh it and, if it seems true to you, surrender, or if false, arm yourself. against her â€, Lucretia, De rerum nature II, 1039.

Bitcoin is essentially just that, a great invention, too hard even for the teeth of the times and which, like all great inventions, is based entirely on a new thought: that of secure, fair, free and transparent access to property and money. To achieve this, he has put all his efforts where everything is too corrupt and centralized, trying to apply his arts where until now man has found only despicable things. He wants a high goal, and with that alone, he already has more than half the means to reach it. Because it is not enough for him to take steps which may one day lead him there, but each step is for him a goal, a test which serves as a stimulus to his science, a promise which sees a sunrise where a candle is on. Bitcoin is the work of Daedalus, as the ancient Greeks said of all that was fair, useful and beautiful. His only paradise is where the serpent of knowledge is or goes, where true democracy and consensus reign, and where the participants of his idea practice respecting the convictions of others rather than imposing them. He has the courage to demand the extraordinary from the world, which is usually as rare with him as the courage to do so, for he has greater esteem for high demands, even if they are not met, than for those that are fully met. . And he knows, further, that when all individuals are allowed to progress, then and only then will humanity progress. So many inventions like Bitcoin, nature does not yet owe to time!

“This is, my friends, real life, / When in the midst of the nocturnal darkness that still lingers, / Let roses bloom, wonder is given”, Goethe, Art, The Idylls of Wilhelm Tischbein, XII.

Who would have thought a few years ago that humans could make their way through space? That since what began with Prometheus, in his quest for human freedom at all costs, inventions have multiplied to such an extent that it takes more and more men to perfect and maintain them? It is innovation, and with it decision and opportunity, that governs all progress of mankind, so that if the world insists on censoring a current institution or creation, we have only to persevere, otherwise our existence would be that of mere spectators of life, who sit where the sun does not scorch, and believe that the sight of man is softened by going after the sun – but through the shadow. It will always be, it is true, more comfortable to believe than to examine, and more flattering to think that one knows the truth than to see around one only darkness, for few men think that each invention has something to do with it. something new to say with every age, and that in the mere birth of an idea, life tells us a host of new truths. Only the intellectually limited man believes that it is possible to make any discovery by being satisfied with those which have already been made, and that a science which does not begin by distrusting what is commonly accepted has some something to be envious of what is offered by a bad show. We never get as far as when we deny, even if we don’t know for sure where the heck we are going, especially if we don’t indulge in research and knowledge to achieve a particular goal, but rather for the fun of it. frequent and admirable to seek and find.

“The gods love the incomprehensible and abhor the obvious”, Upanishad of the great Aranyaka, Fourth Lesson, II, 2.

Just as a body cannot be set in motion without a cause, so it is not possible for a new concept to burst into the world without causing a great effect. This is the case with Bitcoin, which, being such a recent invention, makes it difficult, if not impossible, to judge it from any angle other than that of the greatest distrust and opposition. It is extremely rare that we are also persuaded by habit and novelty. Any innovation, any growth, anything that is a guarantee of the future, is generally accompanied by a form of opposition, prudence, even fear. Man, however civilized he may be, has never been an animal sufficiently advanced to want to live enlightened by the virtues of a world which had not yet been invented, and if it is true that he has always wished things would change so that his situation would improve, he never did anything other than leave them as they are and resign themselves to seeing them get worse. It is extremely difficult to convince him that the only way to improve what is proven to be obsolete is to change it completely, and that if there is something improbable in the universe, it is that the improbable will not. will not win in the end. History is full of inventions that are today considered brilliant and extraordinary, but their contemporaries rarely rejoiced in the conditions in which they were generated. Of course, this is also the case now, to such an extent that it seems that we are closer to machines learning to feel than to men learning to live, because for the republic of mankind it is better to keep everything intact, even if it is bad, than to change it for a mathematical invention whose transparency not only constitutes its greatest charm, but proves beyond words that no possible action is illogical in the sense of mathematics, of physics or mechanics, and that the most complicated of machines can still be built using only the common sense of human intelligence.

“Time and reason have opened my eyes well, / And only the years will make me open them better”, Corneille, NicomÃ¨de II, 3, 637.

This is a guest article by Anderson Benavides Prado. The opinions expressed are entirely their own and do not necessarily reflect those of BTC Inc or Bitcoin Magazine.