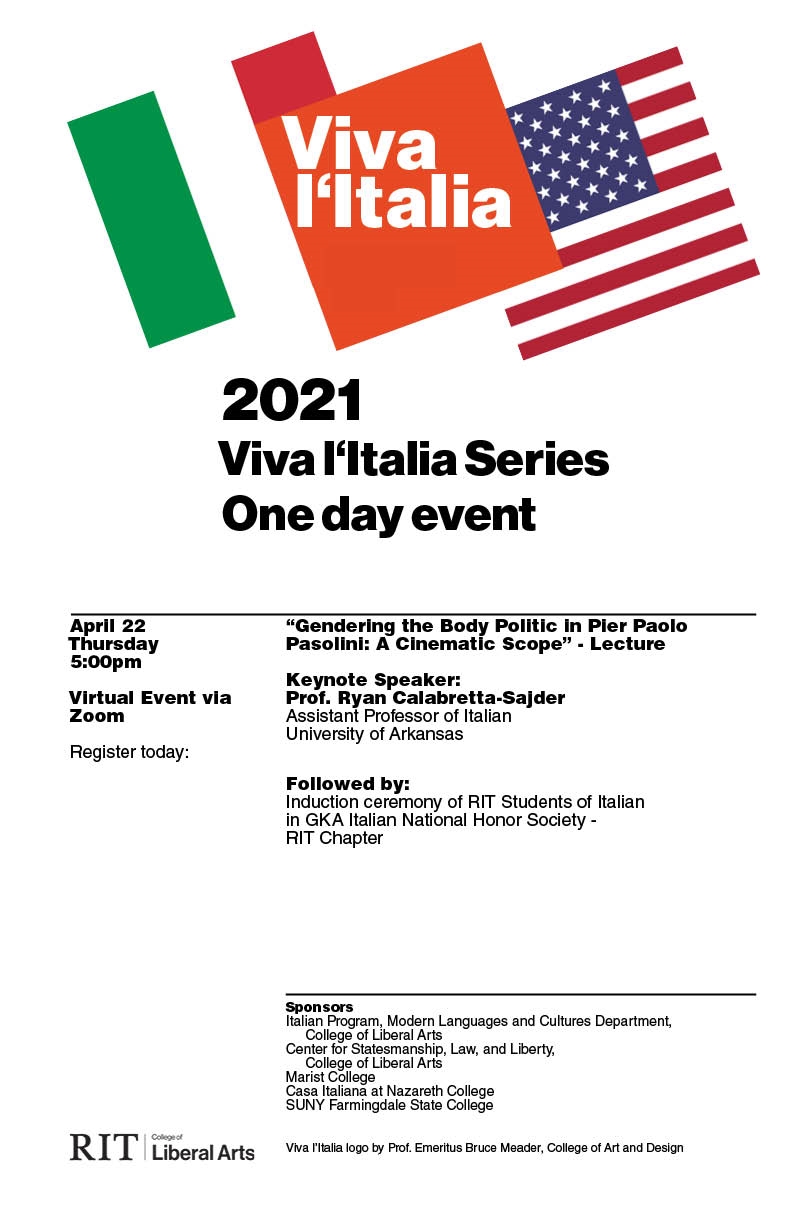 Calabretta-Sajder to give a guest talk on Thursday

Ryan Calabretta-Sajder, Assistant Professor of Italian, will give a guest talk at the Rochester Institute of Technology.

The event is open to the public but registration is required. To register click here: t.ly/30k4.

Abstract: Pier Paolo Pasolini, best known to American audiences as a director, although he excelled in many genres, was a prominent filmmaker in the 1960s and 1970s on European screens. As an author, Pasolini challenged Italian, and indeed European, cinema, both thematically and cinematographically, even to his own detriment in the Italian landscape. Some of his more â€œoutrageousâ€ films are the most studied and still debated in film studies, and Pasolini is a household name in all fields because of the influence he has had on European cultural society. In fact, during Pasolini’s funeral in 1975, Alberto Moravia referred to Pasolini as a civic poet, which is clearly present through his filmography.

In this contribution, I explore various uses of the conceptualization of â€œqueerâ€ as it is present in Pasolini’s films. I’ll start by examining how Pasolini is changing time and space by adopting Elizabeth Freeman (Timeline: queer temporalities, queer stories) and Jack Halberstam (In a queer time and place: transgender bodies, subcultural lives) theoretical frameworks and apply them to films like Mom roma (watching in particular the scenes of marriage and prostitution) as well as many moments of Teorema. In queering time and space, I argue that Pasolini is trying to “normalize” the subordinate.

In addition, I intend to analyze how Pasolini presents the body and to offer an in-depth examination of the politics of the body present in a few of his films (for example Accattone and Teorema). In addition to using Butler’s Bodies that matter, Gayle Salamon’s Assume a body: transgender and the rhetoric of materiality, and that of Hector Dominguez-Ruvalcaba Translating queer: bodily politics and transnational conversationsI will also include gaze theory to argue that Pasolini queers the body as a means to a political end. And in doing so, Pasolini visually demonstrates his â€œcivic poeticâ€ voice.

Biography: Calabretta-Sajder is the head of the Italian section at the U of A, where he teaches courses in Italian, film and gender studies. He is the author of Divergenze in celluloide: colore, migrazione e identitÃ  sessuale nei film gay di Ferzan Ã–zpetek (Celluloid Divergences: Color, Migration and Gender Identity in Ferzan Ã–zpetek’s Gay Series) with Mimesis editore and editor of Lasting impressions of Pasolini: death, eros and literary enterprise in Pier Paolo Pasolini’s opus with Fairleigh Dickinson University Press. Her research interests include the integration of gender, class, and migration into Italian and Italian-American literature and cinema. He recently received one of four Fulbright Awards for the Southern Foundation for conducting research and teaching at the University of Calabria, Arcavacata, for Spring 2017. He is currently working on two author projects, one exploring Italian-American gay author Robert Ferro died of complications from AIDS in 1988 and the second on Algerian Italian author Amara Lakhous.

Calabretta-Sajder is currently President of the American Association of Teachers of Italian, President of Gamma Kappa Alpha, the National Italian Honors Society, the co-chair of the Committee of Graduate Students of the Profession of the Modern Languages â€‹â€‹Association, member of the Executive Committee of the Association of Italian-American Studies and Secretary / Treasurer of the American Association of Supervisors and university coordinators. In May 2015, he received a South Central MLA Association Research Fellowship to conduct archival research on Italian-American authors at the Beinecke Rare Book and Manuscript Library at Yale University. Calabretta-Sajder has received numerous teaching scholarships to adopt various technological tools in the world language teaching classroom.