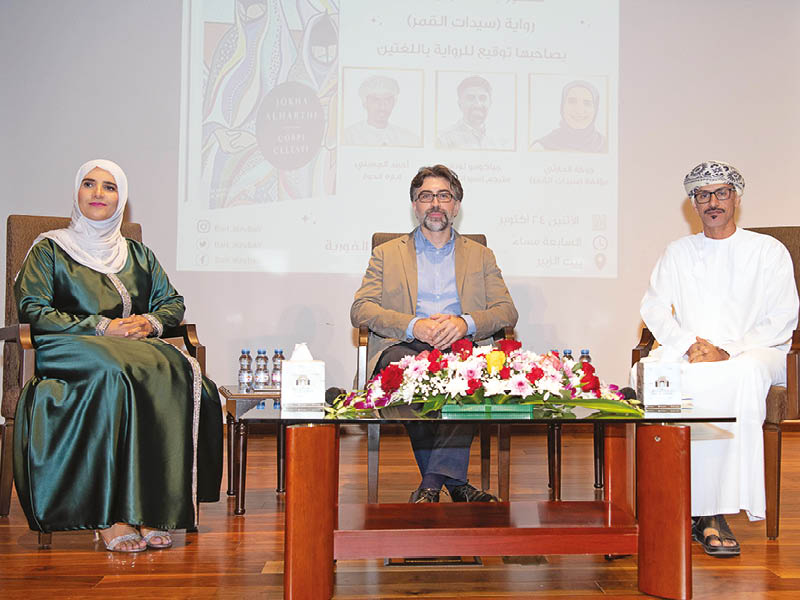 Muscat – Author Jokha al Harthi celebrated the release of the Italian translation of her award-winning novel Celestial Bodies at Bait al Zubair on Monday evening. The event, organized by the Italian Embassy and Bait al Zubair, included an interview between Jokha and the book’s translator Giacomo Longhi.

“I was so happy when my book was translated into Italian. I’m a big fan of Italian culture and Italian authors. I grew up reading Italian authors like Alberto Moravia and Umberto Eco,” Jokha said.

After a trip to Italy, she discovers that her publisher – Bompiani – also publishes the works of Moravia and Eco. “I said to myself: this is all I aspire to!” she added.

Expressing his enthusiasm for the project, Longhi said, “I think the Italian people really loved the book, and Oman is really new for the Italian reader. It is the first Omani novel translated into Italian. I think Omani culture is something Italian readers could relate to very well.

He also shared some of the challenges he faced while translating the book. “The process was interesting because it was my first time working on a novel about a country I hadn’t visited,” he said.

“The poetry in the novel was a big challenge, and there are a lot of poems in the books, all very different from each other. For example, classical poems and poems by 19th century Omani poets,” Longhi said.

When the book was released, there was also a discussion about the role of literature in representing communities, cultures and countries.

While Jokha finds joy in presenting Oman and Omani culture to a global audience, she cautioned that literature does not necessarily reflect reality. “The relationship between reality and imagination in the novel is thorny and complex because literature is not a mirror of reality. And if it is a mirror, it will be an uneven mirror, like the mirrors you find in carnivals,” she said.

Instead, Jokha urges readers to appreciate the novels for what they are. “Often, especially in the West, Arabic literature is (regarded) as social documents,” she noted. She thinks that other forms of non-fiction texts are better suited to reflect the reality of a country.

When asked for advice she would give to new writers, Jokha said, “It’s the classic advice we share with writers: read a lot and try a lot. Because without trying, and if we believe that the first text we write is the greatest text of all time, we will not progress. In truth, we must toil and suffer to write well.

The event was the grand finale of the 22nd Italian Language Week organized by the Italian Embassy in Oman. The annual initiative, promoted by the Italian Ministry of Foreign Affairs, aims to promote the Italian language and culture abroad.
(Contributed by Hibba al Kindi)

Wexford Festival Opera: Women and war will dominate themes as 2023 season is announced