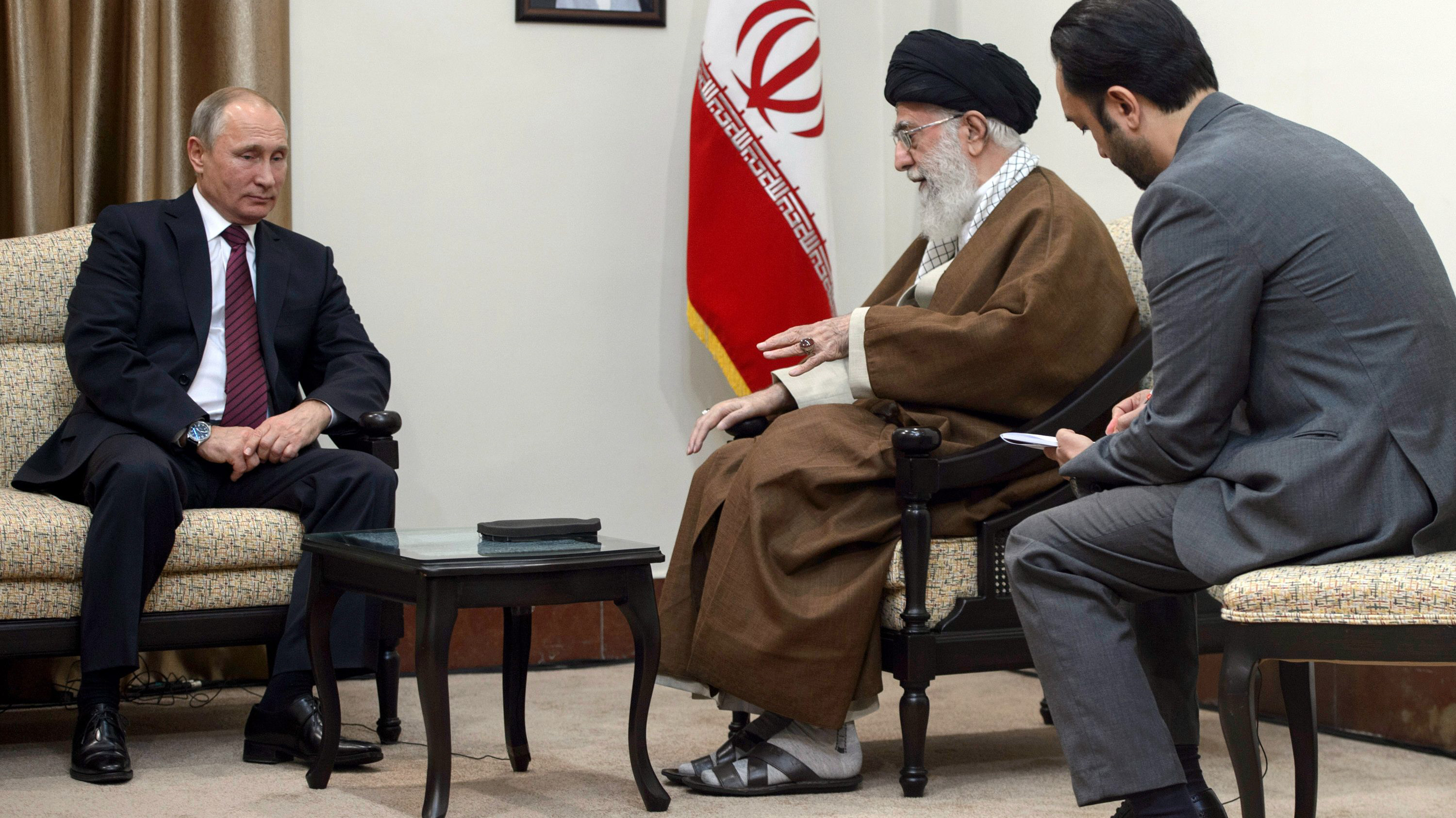 Iran and Russia, two isolated fossil fuel giants under US sanctions, are rapidly trying to develop new areas of bilateral cooperation in order to catch up with their pariah status. But rather than being driven by shared values ​​or a history of warm ties, the Tehran-Moscow bond is driven by their shared enmities as well as short-term calculations about their current position in the world. The 2022 invasion of Ukraine, which accelerated Moscow’s gradual estrangement from the West, pushed Russia and the Islamic Republic to solidify their ties in the face of the United States’ apparent determination to cement its isolation.

From reports that Iran may be delivering “several hundred” drones to Russia for its war on Ukraine to Iranian state media’s celebration of a $40 billion interim energy deal between Iran’s Oil Ministry and Russia’s Gazprom, the signs increasingly point to the maturing of an alliance of convenience and the consummation of a nascent anti-American bulwark in Eurasia.

This affinity grew so rapidly that the leaders of the Islamic Republic, radically departing from their long-held position on foreign intervention and “imperial” wars, came out explicitly in favor of Russian aggression and rationalized it as an intrinsic “response” to NATO provocations – an interpretation that even regime supporters take with a grain of salt.

For Tehran, this shift in foreign policy toward closer synchronization with Moscow is seen as necessary to bolster Iranian resilience to external pressures. But even if Iran shamelessly promotes its closer relations with Russia, the Iranian public is obviously not convinced that this will serve its national interest, be productive or even conform to its ideologies.

The 2022 Democracy Perception Index (DPI) from the Copenhagen-based Alliance of Democracies Foundation notably determined that 50% of Iranians have a negative perception of Russia, while only 15% expressed very or rather positive about this country. Attitudes towards Russia are more negative among Iranian citizens than among Egyptians or Saudis – two close regional partners of the United States – or even the populations of American NATO allies Greece, Hungary and Turkey.

Iranians’ negative perceptions of Russia date back long before the eruption of full-scale war in Ukraine. A decade earlier, in 2011, Gallup found that only 13% of Iranians approved of Russia’s role in the world, compared to 52% who viewed it negatively.

The limited presence of international organizations in Iran and the deliberate insularity of the state have meant that the Iranian perspective is rarely reflected in global opinion polls. This makes it particularly difficult to identify or discern a diversity of thought in the population, often leading to misguided characterizations of Iranians as a conservative and isolationist monolith.

Similarly, polls conducted by Iranian organizations tend to be biased and unreliable given the inextricable conflicts of interest and the government’s outsized influence to sway national polling organizations. Even so, it is fair to assume that despite the obstacles mentioned above, the occasional opinion polls of Iranians conducted by major Western institutions such as Gallup or the Alliance of Democracies Foundation – the conclusions of which tend to be, generally reliable and taken for granted around the world — are authentic and reflect the realities of Iran.

The bitter history of regional interventions by the Russian Empire and the territorial losses suffered by Iran as a result of the Russo-Persian Wars between 1651 and 1828 perpetuated the Iranian view of Russia as a colonial intruder. This historiography may form the basis that galvanized these negative Iranian sentiments against their neighbor across the Caspian Sea.

But antipathy towards Russia and its global footprint is reinforced by the Iranian public’s perception that, more recently, Moscow has repeatedly failed to demonstrate its commitment to mutually beneficial relations, and there are scant indications that he has always been a reliable partner. Iranians hold Russia partially responsible for their current economic agonies, believing that by voting in favor of six United Nations Security Council resolutions against Iran’s nuclear program between 2006 and 2010, Moscow in fact endorsed the sanctions of the ‘West. These punitive economic policies have led to widespread recession and deprivation, with 36.1% of the population currently living below the poverty line. Many Iranians argue that if Russia had simply used its Security Council veto to defend its supposed ally, perhaps the nuclear saga could have taken an entirely different trajectory, and Iran would not have been in a hurry. by such punitive measures.

Many Iranians also refuse to be persuaded by a conformist reading of their country’s foreign policy, and so this group sees no reason to differentiate between the United States and Russia as great powers largely driven by their own interests rather than through ethical standards, multilateralism, or accountability to allies and partners. They say that while the hegemonic United States is worthy of suspicion and distrust because of the way it behaves abroad, Russia should not be spared critical scrutiny either, given that it places regularly its agenda before the rule of law and has no qualms about disrupting the world order or betraying its “allies”.

Russia’s work on the Bushehr nuclear power plant, which was to become operational in 2001 under an agreement between Iran and Russia’s Minatom, was initially valued at $800 million. But it ultimately cost Tehran more than $11 billion and took nearly four decades to complete due to repeated postponements from Moscow. Domestically, the nuclear power plant has become an example of dysfunctional relations with Russia, despite claims to the contrary by the Iranian government.

In the eyes of the most radical pessimists and the opposition in exile, who view every action and gesture of the Iranian government in a cynical light, Russia’s insignificant political, economic and military support for the Islamic Republic and the reciprocal concessions of Iran evoke a colonial relationship. To these critics, Iran’s rulers sold the country and its vast resources to the Russians and got next to nothing in return.

For example, after the Convention on the Legal Status of the Caspian Sea was agreed in 2018 and signed by the five riparian states, there was a huge outcry by Iranian nationalists that the government had ceded Iran’s 20% share in the waters of the Caspian Sea and settled for a 13% share in order to ingratiate itself with Russia – a charge that was , indeed, somewhat true. Some same rehashed the myth that Iran controlled 50% of the waters of the Caspian Sea but had given up its rights in order to win the support of Russia. These critics of the Islamic Republic, whose views are shared by many ordinary Iranians as well as domestic critics, insist that by putting all its eggs in Russia’s basket, Iran has unbalanced its foreign policy and has completely decoupled from the West, which will ultimately harm the nation and its long-term interests.

The Iranian government, meanwhile, has invested heavily in an attempt to influence public attitudes toward Russia, assuage the resentments that have built up against Vladimir Putin’s idiosyncratic political skill, as well as paper on historical grudges. Iranians maintain against imperial Russian policies towards their country.

During a meeting with Putin in Tehran in 2007, Supreme Leader Ayatollah Ali Khamenei said, “The image of the Russian nation in our minds is bright and positive.” His statement raised eyebrows and recalled several examples of how the Russian Empire had overpowered and seduced Persian royal dynasties over time, especially the Qajar kings, and annexed large swathes of Iranian territory from what was once one of the largest countries in the world.

The Islamic Republic’s propaganda arm has long sought to portray Russia as a benevolent companion and trusted ally who will protect the isolated country from the economic pressure of US sanctions. Increasingly, the official media reports how much Russians love Iranians and that Russian tourist influencers are flocking to Iran to explore its natural and architectural wonders.

But it looks like the government will struggle to win over a skeptical public that doesn’t understand Russia through the prism of state propaganda. Instead, a plurality of Iranians would like to see balanced ties with all nations and for Tehran to pursue a mature and pragmatic overseas program in place of the current sensationalized modus operandi based on revolutionary anti-Western zeal.

Based on the current path of the Islamic Republic, popular opposition to a full relationship with Russia is unlikely to make a difference to government policies. As in many social, cultural and economic spheres, the hard core of the leadership does not care whether its decisions please the people, especially the middle class, whom it does not consider only part of its base. popular but treats it as an internal enemy. As long as relations with Moscow satisfy the government’s short-term pleas for survival, Tehran will continue those ties, even to the chagrin of a dubious population.

Kourosh Ziabari is an award-winning Iranian journalist, writer and media correspondent. He is a recipient of a Chevening Award from the Foreign, Commonwealth and Development Office and is currently a correspondent with the Hong Kong Head Office. Asia time. The opinions expressed in this article are his own.

The Middle East Institute (MEI) is an independent, non-partisan, non-profit educational organization. It does not engage in advocacy and the opinions of its scholars are their own. MEI welcomes financial donations, but retains exclusive editorial control of its work and its publications reflect only the opinions of the authors. For a list of EMI donors, please click hise.