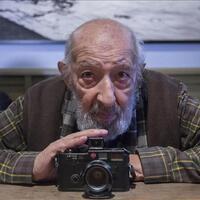 GÃ¼ler suffered a heart attack and was transported to the intensive care unit at Florence Hospital in Istanbul, where he breathed his last.

ErdoÄŸan, who was also photographed by GÃ¼ler, said the legendary photographer will always be remembered “with his works that he left behind.”

Nicknamed “the Eye of Istanbul”, GÃ¼ler rose to fame with his black and white portraits of the city.

He suffered from kidney failure and needed treatment three times a week.

“This dialysis amazes me,” he said in an interview with Anadolu agency in 2015.

â€œI can’t do anything three days a week. It takes four hours each time, and it’s unbearable.

However, old age and illness did not prevent him from continuing his work.

In 2015, he photographed the ongoing construction of Istanbul’s Third Bosphorus Bridge.

GÃ¼ler belonged to a family of Turkish intellectuals.

His mother came from an Armenian family who owned several houses around BeyoÄŸlu, a district of Istanbul.

GÃ¼ler’s father was orphaned at the age of six. He was later a pharmacist for the Turkish army at the Battle of Gallipoli in 1915.

Thanks to his father’s connections, Ara landed his first job as an assistant film director in one of BeyoÄŸlu’s many theaters.

In his father’s pharmacy, where theater performers regularly gathered to buy makeup for plays, GÃ¼ler met the founder of modern Turkish theater, Muhsin Ertugrul, and was even able to work with him.

At 22, he received his first camera, a Rolleicord II. His career as a photographer began when he joined a local newspaper called Yeni Istanbul in 1950.

In the late 1950s he worked for world famous magazines such as Time and Life in the United States, the French weekly Paris Match and Der Stern in Germany, traveling the world from Pakistan to Kenya and New Guinea. in Borneo.

He was in Sudan in 1978 just before the Second Eritrean Civil War to report on clashes between rebel groups. Just before Turkey’s 1980 military coup, GÃ¼ler traveled to Mongolia, the homeland of the Turks, to photograph 8th-century inscriptions. In 1990, he left for Indonesia with his wife for a report on cannibalistic tribes.

But it was in Turkey that he made one of his most astonishing discoveries: an ancient city called Aphrodisias in the western province of Aydin in 1958. While returning from a job involving the inauguration of a roadblock, his driver got lost, in a village where the inhabitants used ancient architecture as part of their daily life.

In 1957, he was in France to cover the Cannes Film Festival. He met legendary figures in the film industry, including American filmmaker Orson Welles, Italian writer Alberto Moravia and Spanish artist Pablo Picasso.