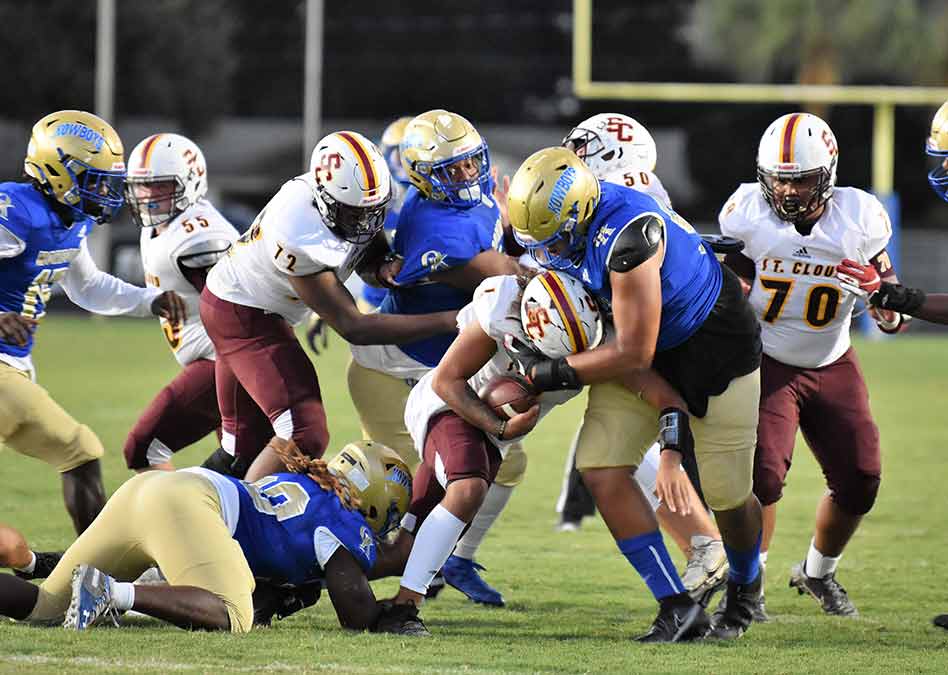 A proposal to be voted on next month could change the landscape of Florida high school football playoffs.

Under the plan, the current one-eight classification system (1-A to 8-A based on school population) would be changed into two groups, the Metro Division and the Suburban Division. The Metro Division would include Florida’s eight most populous counties (Pinellas, Miami-Dade, Hillsborough, Palm Beach, Orange, Seminole, Duval and Broward), with the remaining 59 counties — including Osceola — forming the Suburban Division. Each division would have four classes (1A-4A) and would crown a state champion in each class.

The goal of the proposal is to create a more competitive balance and give more teams the opportunity to compete for a state championship; while eliminating explosive matches in the state finals. Since 2011, 87% of the 77 state titles up for grabs have been won by what would be considered Metropolitan Division schools; while only 35 different schools have even won a state championship during this time.

One of the issues this plan hopes to address is the built-in advantage of schools in major metropolitan areas when it comes to accepting transfers. With some schools in larger cities having five or six schools located within a few miles of each other, it becomes easier for a student-athlete to transfer to that school as transportation becomes less of an issue. While this will still take place, schools in more rural areas will not have to compete with these schools in the playoffs.

FHSAA officials also hope the plan will reduce the number of lopsided playoff games, which have seen even state championship games go to a running clock under the mercy rule. For example, St. Thomas Aquinas won all five of its Class 7A playoff games last year by averaging 30 points – including a 45-7 win over Gainesville Bucholz in the semifinals. Under the new proposal, St. Thomas would be placed in Metropolitan Class 4A and face teams from heavily populated counties in the playoffs; while Gainesville Bucholz would compete in the Class 4A Suburban Division.

It’s a plan that has divided criticism from Osceola County coaches and athletic directors. For Osceola High, which has been eliminated by what would have been classified as “Metro Division” schools in four of the past five seasons, it could create an easier path to the state championship – eliminating schools like Apopka, West Orange, Dr. Phillips, and Miami-based teams that are traditionally part of the Kowboys group.

“It’s an interesting proposition,” Osceola coach Eric Pinellas said. “I can’t say I’m opposed to it and I know a lot of coaches are in favor of it. I don’t think there’s a plan – existing or proposed – that would make everyone happy. There are a few states that do something similar, so I don’t see anything wrong with trying. »

The other county coaches and administrators are indifferent. “Until I see how this will turn things around, it’s hard to say if this plan would be a good thing or a bad thing,” St. Cloud coach Bryan Smart said. “There’s some trepidation partly because I think we’ll be placed in the bigger division and that would mean we might have to play in bigger schools with a lot more students than we have.”

Smart boss, sporting director Eric Godfrey, said they were leaning towards backing the proposal. “We’ll probably vote to approve it, but in the long run I don’t see that changing much for us,” Godfrey said.

Gateway coach Marlin Roberts says he is also indifferent. “There’s a good chance Liberty and Poinciana will both remain independent, which means we’ll likely still be stuck in the same district with Polk County schools. The proposal probably won’t hurt us, but I don’t think it helps us much either.

Others, like Celebration athletic director Rick Tribit and Harmony coach Don Simon, oppose it. Both said that open enrollment and school choice created the problem of competitive balance and that this proposal does not solve that problem. “The biggest problem right now is that we have a system that allows kids to play wherever they want,” Simon said. “Until this issue is resolved, nothing really changes, except maybe the names at the top. What this really means is that the best teams in the Suburban Division will no longer have to going through big city schools to win a state title and in the long run it might just make those teams even stronger I really get what they’re trying to accomplish I just don’t think this proposal will solve the problem.

“I don’t see that as a real solution. This may create an easier path for some suburban schools to win a championship, but some of those schools are already taking advantage of transfer rules the same way big city schools do,” Tribit noted. “High school football is becoming like the college transfer gate and this plan really doesn’t solve the resulting problem.”

Tribit is also concerned about what could happen if the plan doesn’t create the desired results. “The FHSAA has a long history of not going back on their rules when they don’t work, they just try to change them. It looks like they’re rushing to get this in place as early as next year and I don’t see why they’re in a rush. Some other ideas are worth considering,” he said.