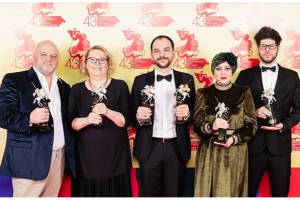 MOSCOW: The 43rd edition of the Moscow International Film Festival awarded its first prize for the best film of the main competition to #dogpoopgirl (Romania) by Romanian director Andrei Hutuleac, who was in Moscow to receive the award at the closing ceremony on April 29. Romanian actress Andreea Gramosteanu also won the Best Actress award for her work on the film.

The festival took place from April 22 to 29, 2021 in physical form despite the challenges of holding an event with theatrical screenings as well as on-site guests and press conferences. But the drop in the rate of COVID-19 infections and the successful deployment of the Sputnik V vaccination program have allowed cinemas and theaters as well as cafes and restaurants to reopen in Moscow. This was the second year that MIFF has successfully foiled the pandemic, as the 2020 edition also physically took place in April 2020 just before Russia entered a national COVID-19 lockdown.

According to the artistic director of the festival Nikita Mikhalkov â€œ210 films from 51 countries were shown at this festival, 447 screenings were shown on 25 screens in eight days. The 42nd festival had 27,000 spectators, so this time it was 32,000. Three times as many foreign guests have arrived, and that is an encouraging indicator. From the United States, Germany, France, Spain and other countries, 81 filmmakers came to see us, last year they were only 25. The interest in the festival is obvious. 4,200 guests and media representatives were accredited, 1,100 more than for the 42nd Moscow International Film Festival.