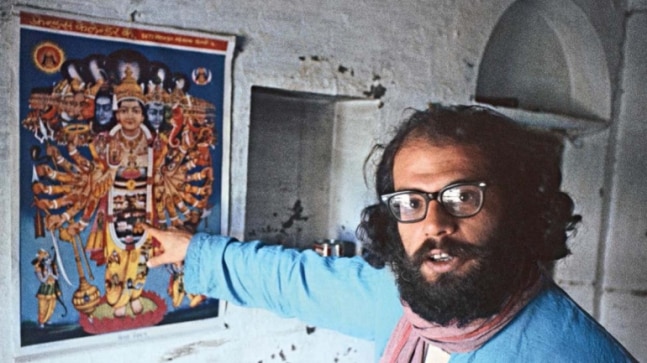 Ginsberg’s Karma: Documentary film on the discovery of India by a hippie

Allen Ginsberg in Varanasi, India, in 1963

The 1950s saw filmmakers like Jean Renoir and Roberto Rossellini come to India, but it was really from the early 1960s that a certain type of cultural tourism of well-known Western intellectuals took off. When American poet Allen Ginsberg arrived in India in 1962 with his partner Peter Orlovsky, he was not the first gay, famous or controversial Western poet to visit – Italian poet and filmmaker Pier Paolo Pasolini had previously accompanied his friends, the novelist couple Alberto Moravia and Elsa Morante, on a trip to 1961. Nor were Ginsberg and Orlovsky the last famous couple on the “New York scene” to come. Avant-garde composer John Cage and choreographer Merce Cunningham followed in the mid-1960s. He was also not the last to fall out with Calcutta during this time – Günter Grass first visited in 1975, lambasted locals for writing complacent garbage, called the city a heap of shit defecated to the earth by God, but kept coming back.

What made Ginsberg’s first visit to India different was that he let go of the tedious distance maintained by other visiting Westerners. He and Orlovsky stayed in an insect infested “hotel” in northern Calcutta, spent a lot of time at the Nimtolla cremation ghat, then at the Banaras ghats, they traveled third class on trains and ate all they have encountered. They met high society people but mostly hung out in the streets with bohemian poets and wandering sadhus.

Ginsberg’s Karma director Ram Devineni calls Ginsberg “America’s first hippie,” which would likely make the poet the world’s first hippie. Thanks to Ginsberg and his Indian experience, four slightly upscale hippies followed him to India a few years later. By the time the Beatles arrived in 1968, the Hippy Trail had already merged across the belly of the planet, from Marrakech to Rishikesh, from Goa to Pattaya. Before the wars in Afghanistan and Iraq-Iran cut off, the road trip from Europe to India and Nepal was probably the most epic land trip possible in contemporary history. As Ginsberg’s Karma tells us, Allen, Peter and a few others were the starting point for the whole “backpacker” travel phenomenon.

Devineni’s documentary is fascinating to watch, not least because Ginsberg, who was also a talented and generous photographer, came to India at a time when the use of 35mm film for cameras as well as 8mm cameras and Super-8 had become quite common. . The mobility offered by these formats gives the archival footage of the film an immediacy, as if the images had been taken yesterday, even if you are surprised by the appearance of the various towns and villages at that time. Harsho Mohan Chattoraj’s artwork rolled out with basic animation also helps move the story forward. For a well-detailed and insightful account of this trip to Ginsberg, read A Blue Hand: The Beats in India by Deborah Baker, who is also interviewed in the film.

– Ginsberg’s Karma is available to stream on YouTube and Rattapallax.com

Click here for IndiaToday.in’s full coverage of the coronavirus pandemic.

Critical Thinking and “Value” of University Education – The Island