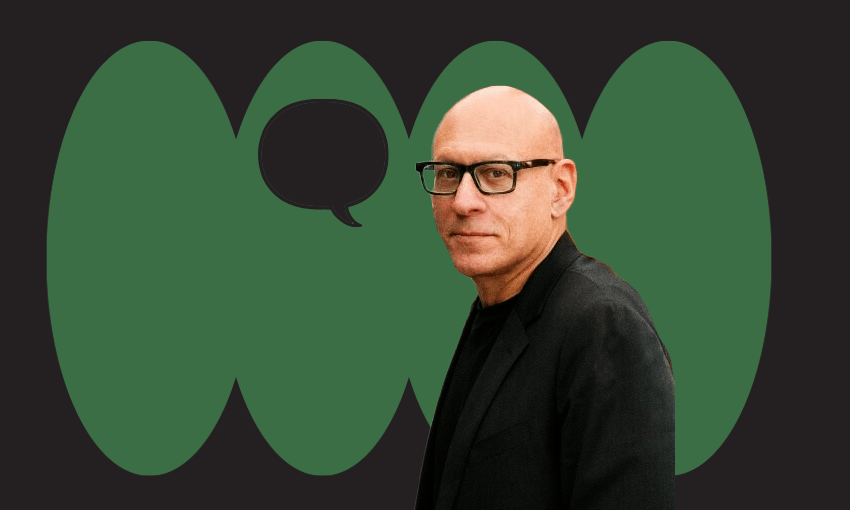 David Shields started out as a novelist before abandoning that format to create collage-like books and films. Ahead of his workshop in Auckland next weekend, Megan Dunn asked him about his finely honed craft.

I don’t remember when I fell in love with the novel. Probably around the same time I realized I couldn’t write one.

American author David Shields is best known for his book-length collage, Reality Hunger: A Manifesto, first published in 2010. The book is composed primarily of quotations from other authors, organized into numbered vignettes and presented in 26 chapters, one for each letter of the alphabet.

Shields started out as a novelist but wanted to convey a more urgent sense of how life is lived now. “I recognize in myself both the thirst for the irreducibly real, and also the impossibility of achieving it completely,” he says.

Shields is the author of over 20 books. This year he published The very last interview. It’s a Q&A, minus the A. Throughout his 40-year writing career, Shields has been asked, by his estimation, more than 2,000 questions. He deleted his answers, then rewrote and remixed the questions to produce this passive-aggressive page-turner. “What’s the worst thing a critic can do? “Have you ever imagined killing a critic?” I laughed, but only because I felt caught off guard. Naked.

Shields’ favorite paintings are those of Rembrandt late self-portraits, for “their incredible nudity”. “He just looks like this very mortal, very vulnerable, very naked man. And I think it’s that impulse that I recognize in art that I love the most.

The moment I saw her cut and paste (workshop) pop-up at this year’s Auckland Writers Festival, I booked my place.

Megan: In the workshop, you will discuss the art of collage, using the Son of Mr. Green Jeans.

Moore’s essay is listed alphabetically and contains a list of real and fictional fathers, Tim Allen in Home improvement to actress Laura Chapin, who played a girl in the 1950s sitcom Father knows bestbut whose own father mistreated her.

I would say that the book-length collage is a complex form that is more difficult to write well than a conventional novel.

For me, collage has a mathematical exactness. It’s not just “Oh my God, let’s put together hundreds of pages that speak vaguely of someone’s life.” For collage to work, it has to be very, very precisely calibrated, and Dinty’s essay is very, very carefully calibrated.

Son of Mr. Green Jeans is only about 1,500 words long and features five different layers: animals caring for their young; parents who mistreat their little humans; the pop culture and TV shows Dinty watched as a child; Dinty grows up with an alcoholic father; in the “present”, Dinty and his wife decide whether or not to have a child.

And rather miraculously, these strata all come together. It is a very sophisticated work, in a very small space.

If you don’t know what collage is, I can say, well here it is, in microcosm.

Megan: Did you know your own collage book hunger for reality would have the impact it did?

David: I really didn’t. Twelve years later, I still get emails almost daily, or certainly weekly, from people who say some version of “I thought I was crazy for not liking conventional romance. I’m interested in something that’s more diaristic or epigrammatic and more like a collage Your book has given me permission to explore what interests me.

Megan: I was impressed by the fluidity of hunger for reality. How was the book born?

David: I taught graduate seminary for many years and would bring hundreds of quotes. And every year, I collected, organized, rewrote, remixed and organized these quotes. And then after about five or six years of that, I looked up one day and realized I had a book staring right at me.

And then for various reasons, hunger for reality caught a little controversy because it was misunderstood as being “against copyright” and “against the novel”. I don’t think it’s the book. I had written three novels and at the time I was trying to write, read and teach conventional, realistic and linear fiction. And I was bored to death. hunger for reality is a book in favor of something exciting.

ON MARSHAWN LYNCH: A STORY

Megan: Now you have also moved on to the cinema. Tell me about this editing process.

David: Lynch: a story is a documentary I directed almost entirely from a remix of found footage. It’s about American football but really it’s about former NFL player Marshawn Lynch, and his refusal to speak to the American media and how that’s a powerful mode and model of protest and a subtle deconstruction. Lynch embodies Camus’ saying, “The only way to face an unfree world is to become so absolutely free that your very existence is an act of rebellion.”

My books and my films are quite adjacent: they’re collagic, there’s a lot of found imagery, a resistance to linear storytelling, there’s a mix of the personal, the cultural, the anthropological and, I hope , of “philosophical”.

Megan: Memes and GIFS seem like 21st century evolutions of the form of collage. I researched some of the Marshawn Lynch memes. Many use his oblique one-liner to the media: “You know why I’m here.”

David: I think that’s a good point. Memes and GIFs are sort of the 21st century equivalent of aphorisms because a one or two second or three second clip of someone shrugging their shoulders in a certain way, or someone expressing disdain or joy, could convey some kind of “universal meaning”. .”

A meme is the pictorial equivalent of an aphorism.

The Lynch movie is 84 minutes long and is made up of approximately 770 clips. Each clip might be its own little GIF.

ON POST-MODERNISM WITH A HUMAN FACE

Megan: In a recent conversation with author Laura Kipnis, you said, “I’m only interested in postmodernism that has a distinctly human face. »

David: I’m not interested in trickery for trickery’s sake. I really like the one by Simon Gray Smoking Diaries. At one point his typewriter key crashes and there is no “H” for half a page. On one level, it’s a kind of postmodern trickery. But in the end, he’s almost literally narrating the book from his own deathbed and it’s extraordinarily embarrassed and you could say it’s hyper postmodern. It is also a deeply human and very nervous, frank, honest and heartbreaking book.

After his death I wrote something in honor of Gray and his widow contacted me and told me that Rembrandt’s late self-portraits were also Simon’s favorite works.

ON THE VERY LATEST INTERVIEW

Megan: One of the epigraphs in your book is Gertrude Stein’s quote, “Remarks are not literature.” Yet your work is a strange refutation of that quote.

David: I agree. I ordered this book so that the questions are statements. Each chapter is preceded by an epigraph. Personally, I like statements. I love aphorisms. I like the joints of things. I like epigrammatic writing.

Megan: Same. The cover of Richard Diebenkorn [see middle book cover, above] is a beautiful portrait of transference.

David: The whole book is about transference. The interviewer keeps asking questions, and then the interviewee, a version of me, doesn’t answer any of the questions.

The book (and the short film based on it) is a memento mori of a middle-aged writer confronting his own limitations as a person, writer, and mortal, and asking those middle-of-the-night questions. The interest of the book is that I hope the reader will ask similar questions.

Megan: And it’s a quick read. There is no bold in the sentences.

David: Right. It’s very minimal. I really wanted that hammered metal feeling. Each sentence is a shot: boom, boom, boom, boom. It is a brutal self-interrogation. So it was crucial that the questions come fast and furious.