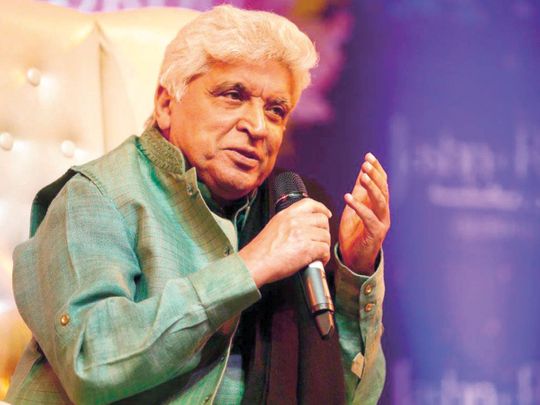 Indian Screenwriter Javed Akhtar Explains How He Changed Bollywood: ‘We Had No Fear Or Doubt’

Kolkata: Javed Akhtar, along with his screenplay mate Salim Khan, set the entire Hindi film industry on a cruise down a hitherto uncharted track in the history of commercial cinema in India when the archetypal villain Gabbar Singh [Amjad Khan] in Sholay thundered: “Kitney aadmi they” (How many were there?).

From the chilling dialogue that gave the cult 1975 production its timeless status like no other in Bollywood, to the deeply moving renditions of a romantic freedom fighter (Anil Kapoor) serenading his beloved with a melodious outburst of unprecedented comparisons in song Ek ladki ko dekha toh aisa laga (Girl, the way you make me feel) in 1942 a love storythe screenwriter-lyricist-poet has always gone well and truly beyond the obvious, beyond the proven, beyond the formula.

Akhtar is both unflappable and nuanced – much like his repertoire of Urdu poetry and his time- and genre-defying lyrics and scripts for many Bollywood blockbusters. He has absolutely no qualms about stepping into the haloed portals of Hindi cinema at a time when “music was king” and so “to think of a story with a hero who doesn’t sing would have been suicidal!”

On the sidelines of the ongoing Tata Steel Kolkata Literary Gathering, the maestro opened up during an exhilarating session with Gulf News March 23.

You started writing screenplays/storytelling at a time when probably a lot of people in Bollywood weren’t even aware of screenwriting as a film profession. You, as a member of the phenomenal Salim-Javed duo, have changed that. How was this made possible?

I’ve always believed that the people who bring about major change and revolutionize things are not themselves aware of it. They don’t understand the magnitude of their task and in a way that is good because if they had known the magnitude, they might have been afraid of the task before them. In all innocence, they must have believed it was the right thing to do and were somewhat blind to the risk involved. I’m going to tell you about a California-based reviewer named Mary Cohen. She wrote a lot about the Salim-Javed films and the kind of meaning she found in all the metaphors used with the dialogues, in the characterizations, etc. So much so that we [Salim-Javed] we didn’t even know that! We had no idea that was what we were doing. It was the time when Rajesh Khanna was at his peak and music was king. We had RD Burman, Lakshmikant Pyarelal giving one hit music album after another. So, at this point, to think of a story with a hero who doesn’t sing would have been almost suicidal! But, honestly, we weren’t consciously trying to be different. And that’s why we had no fear or doubt about what we were creating.

Let’s take two examples: ‘Kaala Patthar’ and ‘Don’. “Kaala Patthar” did not do well commercially, even though it had a very intense script and narration. “Don”, on the other hand, was more casual in mood, but proved to be a cult film. How difficult is it to have your finger on the pulse of the audience, every time?

Never try to put your finger on someone else’s pulse. Rather, keep feeling your own pulse, because whatever interests you will hopefully interest at least some people. But if you start to feel the pulse of others, you may or may not be doing it right. Believe in your own ideas, your convictions, that’s what counts.

Returning to Kaala Pattar and put onyou see Kaala Pattar was an intense movie, but we had been there before. In comparison, put on was something new. It was the first pure hug movie in Hindi, without any family angle. There was no false emotion. There was no “mother”. For example, Pran, in put on, had two children, but we didn’t make an emotional subplot out of it. That is why put on remained a pure caper movie and we stayed honest with that. You know today, it may seem very commonplace, but in the 1970s, making a film where the characters did not have a family background was unheard of. Recognizing a person as a person, as an individual did not exist in Hindi cinema until put on come.

I can also illustrate this point with my experiences as a lyricist. For example, I did the lyrics for both Jodhaa Akbar and Rock On!!, in the same year. While Jodhaa Akbar earned me a lot of popular and critical praise and awards, Rock On!! not. But let me tell you, the words of Rock On!! were unprecedented as generally, English words were used in Hindi songs mainly for comedy purposes. But it was not a comedy. They were words that came straight from the heart. They sounded like songs written by a rock band and so making those lyrics was a much bigger challenge than Jodhaa Akbar.

In the British National Museum there is a room almost the size of a football pitch, where there are manuscripts and letters written by people like [William] Shakespeare, [John] Dunne, [P.B.] Shelly, [John] Keats, Oscar Wilde… you just have to name it. And in this room, in a glass case, you will also see Paul McCartney Yesterday in his own handwriting. It shows the maturity of this nation and the confidence of the intellectuals of this nation to have both Shakespeare and McCartney under one roof.

Do you see a change emerging from the contemporary milieu in India, to match the idea of ​​what you just mentioned about the British National Museum?

In 1976, I remember once having a conversation with Mr. [Satyajit] Ray, in the presence of this journalist named Amita Malik. Amita tried to run Sholay and you know who contradicted it? Mr Ray. He said, ‘Don’t say that about Sholay. I saw this film and I am very proud that today India can make a film like Sholay. I’m so happy about it. It’s such a well done movie.

Mr. Ray could afford to say that, but Amita Malik, the journalist, could not because Mr. Ray had no doubts about his intellectual personality. Few of us can do it – that’s the problem. It is very important to be your own voice and not someone else’s echo.

How was the experience of collaborating as a lyricist with your own children in films? You did it with Farhan and Zoya Akhtar in some of their films…

First of all, you have to forget that these are your children. Second, you have to get rid of this idea that anyone born after you is less intelligent, less talented than you. “I am wiser than my father and also wiser than my son” – this agreement will not work! Even if they are your own children, you have to listen to them carefully because they know a lot of things that you may not know or understand because ultimately it is their world. At the same time, I also have some things to share with them that they may not know. So if there is mutual exchange, mutual respect, then you can work with the younger generation. My collaboration with Farhan and Zoya is based on this mutual respect.

Your anthology ‘Shyaari’ has been translated from Urdu to Bengali for the first time. According to you, what is the importance of translations in the promotion of literature? And is the end result always satisfying?

The end result is not always as satisfying as it should be. However, let’s not forget that languages ​​were made to communicate. It’s so ironic that more often than not, language becomes a barrier to communication! Translations are the only windows to these barriers. Imagine, if there hadn’t been a translation, we wouldn’t have known who [Leo] Tolstoy was or who was Dostoyevsky or who was Alberto Moravia. We would still have managed to read English literature, but what about continental literature? It’s a scary thought.

Obviously, translation has its limits. Sometimes the flavor is lost. Some words cannot be read and understood in their entirety by literal translations. The problem is all the more acute with poetry. More often than not, poetry is blurry. He speaks in nuances and symbols and some metaphors in particular are difficult to translate. Therefore we have not included any ghazals in these bengali versions because i think ghazals do not lend themselves to translations. You can translate a word, but how do you translate the story of that word? In Urdu there is a word called Maikhanawhich is so much more than just a “tavern”… But that’s what a literal English translation would tell you – unfortunately.

It is often said that the power of the written word is rapidly losing its appeal with the younger generation. Your views…

Children today don’t just depend on books for information. They have their iPads, phones and other gadgets. They have their sources of information and these don’t have to be in the form of books. Also, that young people do not read enough or are not too intellectually inclined is a complaint that has existed since the days of Aristotle! If you google it, you can probably see that even Aristotle once regretted that the younger generation wasn’t focused enough! So we’ve been there before [signs off with a hearty laugh].

Why Trans Beauty DEI pioneer Joseph Harwood is speaking out