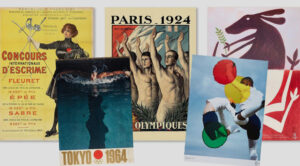 Classic posters are across town until next month.

The City of Paris offers an exhibition along the gates of the HÃ´tel de Ville, with posters provided by the Olympic Foundation for Culture and Heritage. The exhibition, as part of Paris 2024 Cultural Olympiad, presents 24 officials Summer Olympics posters, as well as a selection of artistic posters that embody the links between art and sport.

â€œThis retrospective exhibition, accessible to all, highlights the cultural dimension that the Olympic Games have had throughout history. All the posters exhibited bear witness to the artistic styles and key issues of their time. As such, the exhibition is an integral part of the Cultural Olympiad program, which will take us until 2024. â€

The exhibition includes a range of posters from the 1912 Stockholm Games to Tokyo 2020. For more than a century, Olympic posters have continued to evolve and diversify, exploring the artistic, political and social developments of their time. era. Many posters were created by iconic artists: painters like David Hockney and Pierre Soulages, designers like Otl Aicher and mangakas like Urasawa Naoki, all of whom offered their own artistic vision of the Games.

Pierre Rabadan, Deputy Mayor of Paris for the Olympic and Paralympic Games and Sport:

â€œEach edition of the Olympic Games has been characterized by sporting and cultural images. Beyond sports and competitions, these posters designed as works of art remain one of the most anticipated components of any Olympiad. This open-air exhibition is the ideal opportunity to present the values â€‹â€‹of Olympism promoted by sport and culture.

For this exhibition, the OFCH made some of the posters available for the first time.

The historic flags of the Olympic and Paralympic Games handed over to the Mayor of Paris after the Tokyo Games are also on display to the public in the Parisian meeting store. Posters are on view until February 1 and the display is unveiled on January 5.

Angelita Teo, Director of the Olympic Foundation for Culture and Heritage:

â€œOlympic posters are a visual representation of the history and socio-cultural identity of each edition of the Olympic Games. Many of these non-conformist posters are now part of a remarkable artistic legacy associated with the Olympic Games and have become iconic cultural works in their own right. We are delighted to have collaborated with the City of Paris to present this incredible historical journey on the road to the Paris 2024 Games.