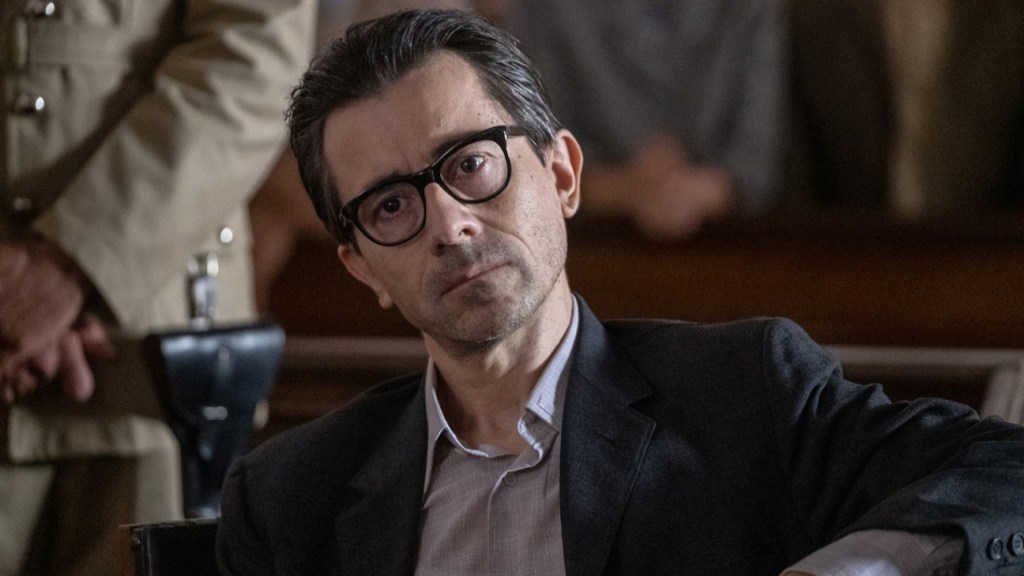 Gianni Amelio’s chronicle on the persecution of Aldo Braibanti, Ant Lord (Signor delle Formiche), does not avoid the propensity of many Italian period dramas for dense verbosity, with characters spouting copious amounts of polished prose. This is perhaps all the more the case since the protagonist was a poet, playwright and philosopher. But Amelio’s classic approach and martyrdom-worthy rejection in Luigi Lo Cascio’s lead performance make this account of Braibanti’s controversial 1968 imprisonment for homosexuality after a four-year trial a quietly moving portrait of the institutional intolerance.

The Braibanti case attracted international attention following his conviction due to the number of influential public figures who spoke out against the travesty of justice – Pier Paolo Pasolini, Alberto Moravia, Elsa Morante, Marco Bellocchio and Umberto Eco among them.

What is now striking about the courtroom drama at the center of the discursive storyline of Amelio, Edoardo Petti and Federico Fava is the prosecution’s tactics, both shrewd and coy, sidestepping the inconvenient fact that homosexuality was not strictly illegal at the time. When the penal code was revised under Fascism, they came up with a creative wording to go after Italian homosexuals so that Mussolini wouldn’t have to admit the existence of homosexuality in the country.

This means that Braibanti was tried for the antiquated charge of plagiarism — not the literal translation “plagiarism” but in the legal sense of psychological coercion, effectively with brainwashing of one’s partner in a consensual adult relationship. The melodramatic language used in court, where the defendant is said to be “determined to possess young men body and soul”, would be funny if it weren’t so rooted in oppression.

The Italian family monolith doesn’t fare too well either, preferring to inflict extreme physical and mental cruelty rather than acknowledge the truth about a queer son. As a sectarian supporting character puts it bluntly, a “reversehas two choices: “Either heal yourself or kill yourself.”

The film shows how the erasure extends even to supposedly liberal journalism of the time. Ennio (Elio Germano), journalist for the daily newspaper of the Italian Communist Party Unita, unsuccessfully fights with its editor to include the word “homosexuality” in its coverage of the trial, despite Braibanti being something of a hero on the left for his record as an anti-fascist supporter. “The party newspaper cannot become the newspaper of a pervert”, mocks the editor.

Amelio draws an unspoken line between the era and the prejudices that persist in Italy today. And at a time when American conservatives have given clear signals about their intention to tackle LGBTQ legislative protections, there is resonance in this narrative of visibility suppression on so many levels.

The early action establishes Aldo’s romantic relationship with his early 20s partner Ettore (promising newcomer Leonardo Maltese), rolled out of the bed they share at a boarding house in Rome in 1965, and taken to a hospital for barbaric electroshock treatment under the instructions of her bitter mother (Anna Caterina Antonacci, a lyric soprano who should stick to her daily work).

The story then goes back to the spring of 1959 at the theatrical art workshop in rural Emilia-Romagna, where Aldo serves as a teacher and mentor. He also conducts studies in myrmecology, the life of ant colonies, which provides the title and some pointed metaphors for tight-knit communities in which the collective good is placed above individual needs, and unity excludes betrayal.

One of Aldo’s students is Ettore, who was pushed by his family to pursue a career in medicine, although he was more naturally inclined towards the fine arts. The older man expands his world, sharing his knowledge of art, literature and ants with generosity and passion. Ignoring the local gossip about Aldo, Ettore travels with him to Rome, but the distance does not prevent his outraged family from intervening.

Amelio and his co-authors drew on transcripts of courtroom scenes, which show the prosecution’s diligence in attempting to discredit Braibanti as a failed intellectual whose books did not sell, and in throwing suspicions about exactly what he was teaching impressionable young students. in Emilia-Romagna. Everything around the case has been fictionalized, including Ettore’s real name and the family dynamics behind his brutalization – but not the horrific electroshock therapy he’s forced to undergo.

A baggy plot detour covers the efforts of Ennio’s activist cousin Graziella (Sara Serraiocco) to organize protesters demanding Braibanti’s release, but that doesn’t add much. The Ennio thread is more helpful, even if the drama is unnecessarily evasive about the character’s sexuality; the reporter serves to snap Aldo out of his silence in court, prompting him to speak out against Italy’s backward attitudes.

Lo Cascio is touching in these still somewhat understated scenes, making Braibanti a thoughtful, self-possessed man who feels no shame for his choices or the situation they put him in.

But the great emotional charge of the film comes when Ettore speaks, feverish and intense, his temples burned by the electrodes and his face haunted by the shadow of the joyful young man he was. Although greatly diminished by the hardships he endured, Ettore clearly refutes the notion of “unnatural relationships” when any union motivated by mutual feeling is inherently natural.

The heartfelt sentiments of this testimonial scene – and a moving interlude that follows years later, in which Aldo and Ettore find themselves once again in Emilia-Romagna – provide a belated wave of sentiment in a film that would otherwise is too elegantly restrained to build lasting power. Even sprinkled vintage soft drinks don’t do much to get rid of the starch. But audiences interested in LGBTQ history, because progress risks being pushed back, could do worse.

Pasolini 100: A Tribute to Pier Paolo Pasolini will premiere at the Castro Theater on…