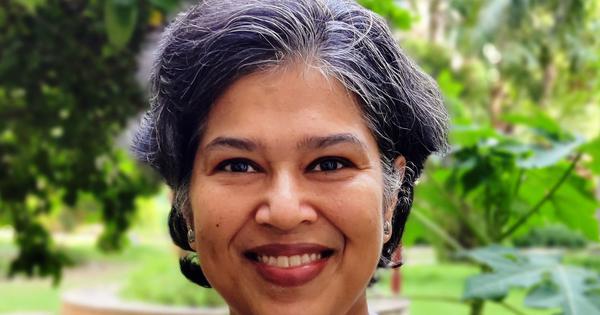 Delhi-based author and blogger Madhulika Liddle worked in the hospitality industry and advertising, in addition to being a travel writer and instructional designer, before devoting herself to writing full-time. His series of historical detective novels, starring 17th-century Mughal detective Muzaffar Jang, has been widely read and optioned for a web series.

The sky garden is the first book of Delhi Quartet, Liddle’s new historical novel series set in medieval India’s Delhi. Liddle spoke to Scroll. In about his books, his fascination with the medieval period, his research and writings, and more. Excerpts from the interview:

I finally decided to do just that: invent an Indian historical sleuth; and as Mughal history is a period that particularly fascinates me, it is this period that I have chosen.

It wasn’t just a historical detective story that was new to India at the time; it was also detective fiction. Most publishers weren’t fond of genre fiction as a whole; I submitted my manuscript to a few major publishers, but both turned it down, saying it would take too much work. I was fortunate, however, that a literary agency (now Osian’s) spotted my work and wanted to represent me. They helped me clean my manuscript and they were the ones who were able to sell it to Hachette: The Englishman’s cameo was one of the first books published by Hachette India.

It seems that you have a fascination with medieval Delhi, since all of your historical fiction takes place in this city.
It wasn’t until the late 90s that I started exploring Delhi’s history. This happened partly because of my sister Swapna, and partly because I was then working at Habitat World, at the India Habitat Center. Habitat World was just starting to come up with ideas for cultural events, and heritage walks were one of those ideas.

I took some exploratory walks in old Delhi and got hooked. The fact that history is perpetuated in these spaces, that the past is sometimes so closely intertwined with the present, is what fascinates me. Without forgetting, of course, the beauty that endures in medieval Delhi: whether in the architecture of the Jama Masjid and the Qila-e-Kuhna, or in the exquisite painting inside the tomb of Jamali Kamali, or even in the story behind Sair-e-Gulfaroshan: the past is a fascinating place, which I want to keep alive through my writing.

Most historical novels in India are about kings and queens, but your latest book, The sky garden, concerns ordinary men and women. Can you explain how you did the research for these characters? Have there been any inspirations for characters like Subhadra, Madhav, Ibrahim and Shagufta?
If you know where to look, it’s possible to find quite a bit of information about how ordinary people came to live in medieval Delhi. For example, I gleaned information on specific aspects of daily life from different books on this subject: for food, I consulted (among others) Colleen Taylor Sen Fasts and feasts; for technology and everyday tools, Irfan Habib A Folk History of India: Technology in Medieval India; for the status and contributions of Jain merchants, Dr Jyoti Prakash Jain’s Pramukh Aitihaasik Jain Purush aur Mahilaayein, etc.

Also, in India, we have the advantage of not being completely removed from our past; a lot of history still lives on in our daily lives, so with a little careful work, it’s not hard to imagine how a character might have lived 400 years ago.

Above all, I firmly believe that human nature does not change; and my story is mainly about human beings, how they react, what they feel, what moves them. This, I think, remains universal, and therefore relatable.

None of the fictional characters from The sky garden was inspired by real people – they are all the product of my own imagination. Some of them echo my own thoughts and beliefs, but that’s about it.

But was it easier to write about characters like Amir Khusro and Razia Sultan, who were real people, than purely fictional characters?
Not really. In fact, it was the other way around: I needed to do quite a bit of research on Amir Khusro and Razia Sultan to try to understand them both. I wanted to stay as loyal as possible to what these personalities might look like, and of course, I had to fully understand the facts about them. It required research. For ordinary characters, like Madhav, Jayshree, and Girdhar, I could shape them however I wanted – give them the stories I wanted, give them the character traits I wanted, the flaws, and the virtues that I thought would suit them. the best. They gave me freedom. Razia and Khusro sahib restricted me in this sense.

How did you approach the research? What help have you received from your sister historian? Is it essential to know Urdu and Persian if you are researching the medieval period?
I needed to do my research mainly to establish the historical context in The sky garden: how the slave sultans established their reign, the ups and downs of Razia’s career, the conflict between Hazrat Nizamuddin Auliya and Ghiyasuddin Tughlaq, etc. These are facts that I was able to collect in several reliable history books, which was not difficult.

A good starting point for me was the excellent quality of HK Kaul Historic Delhi: an anthology. Swapna helped me a lot by showing me various books to which I could refer; she also lent me her copy of the translation of Ishtiyaq Ahmed Zilli from Zia-ud-Din BaraniTarikh-i-Firoz Shahi. Most importantly, Swapna read the first draft of my manuscript to verify its historical accuracy, made several invaluable suggestions, and corrected some errors.

You have written seven books so far, two of which are collections of short stories set in the present, while the rest are historical fiction. What adjustments did you have to make when switching between these two shapes?
I don’t really need to pay much attention to the way I write a story, vis-Ã -vis the period in which it takes place. It comes naturally. Most of all, I make sure that when writing a period article I don’t use modern slang, for example. Additionally, I tend to follow some self-imposed ground rules for language that I believe help make the language more formal or more archaic: for example, “bet” instead of “bet”, ” guess â€instead ofâ€œ guess â€, and so on. to. I think my fascination with the past (including the fact that I read a lot of historical fiction as well as old books) helps: I’m easily able to slip into what I call ‘old fashioned mode’. With the fiction set in the present, I get rid of my old character and move into a modern fashion, using the idioms, slang, and other forms of language currently in force.

The Muzaffar Jang series has been optioned for a film adaptation. When do we expect to see it on screen? Who do you think would be the best actor to play the protagonist?
Yes, the dramatic rights to the Muzaffar Jang series have been sold, so we’ll see the books turned into a web series – but I don’t know when that will happen. As we all know these things take their time and the Covid pandemic has taken its toll with many projects. As to who I would like to see as Muzaffar, I honestly can’t say. At one time, I could have said Hrithik Roshan (his portrayal of Akbar in Jodhaa-Akbar impressed me), but he might be a little too old to play Muzaffar by the time the series comes to fruition.

What’s your next project? Following The sky garden, or a new book from the Muzaffar Jang series?
No more books by Muzaffar Jang will be written for the moment, I do not intend to return to this series. But yes, I am currently writing the second book of the Delhi Quartet, which will be the continuation of The sky garden.

Tell us about your other interests – travel writing, classic Hindi cinema, and cooking.
I am very curious about the world and have a wide range of interests: nature and wildlife, history, culture, food, cinema (especially pre-1970 cinema), and more. Some of these interests come together in my love for travel.

I love to travel and explore new places, especially those with an interesting history, rich cultural heritage and natural beauty. My travel writing has, thanks to the pandemic, been put on the back burner for now, but I have continued to write about classic cinema and food. My blog, Dusted, is almost entirely devoted to classical cinema: I review old films (mainly Hindi, but also from all over India, via Hollywood and world cinema – as long as they date from before 1970); I also make thematic â€œten favorite listsâ€ of old songs, which are my most popular posts.

I’ve always been interested in food and cooking, and the flexible hours of being a writer allow me more time to experiment with and write about food. While in lockdown, I embarked on an international cooking project, focusing on one country every two weeks. I turned this project into a memory cookbook, Containment lunches, which I will publish on Kindle myself, probably in December of this year.

Abdullah Khan is a Mumbai-based novelist, screenwriter, literary critic and banker. Her first novel, Patna Blues, has been translated into eight languages. he is reachable here.

Sombra Overwatch Exploit keeps him infinitely inside the wall on Numbani