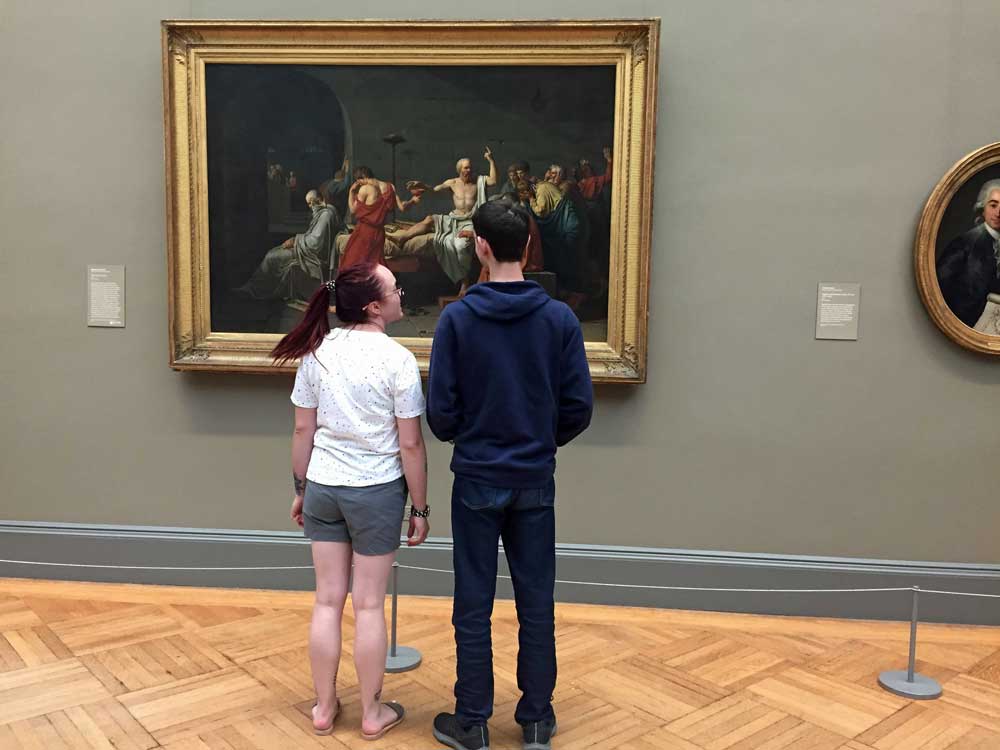 Today is the day. We are taking our son to UCF. There will be gloom. This day has been rushing towards us since it was born. It was once a distant meteor, invisible to the naked heart, but as sure as any astronomical certainty: its trajectory for a direct hit was also plotted on the day of its birth, as well as an equally precise day of impact. than that of college. move-in appointment day, until time: 3:30 p.m. at the Hercules dorm complex in our case, on that oddly mapped college campus in Homerphilia on the outskirts of Orlando.

Nothing you can do – nothing you have to do: being a parent also means preparing for the great extinction for 18 years, then submitting to the appointed day – and paying more. We are the dinosaurs. We need to be wiped out so our children can have their own Cambrian explosions. (Anachronistic, I know: the Cambrian came first, the Jurassic second. But get the hell out of here, why don’t you: dinosaurs aren’t known for brain capacity.)

The fact that we’ve been through an extinction before – with our daughter, who has since pounded us with many more vengeful meteors – doesn’t make matters any better. It certainly didn’t prepare us any more than the weird cancers we picked up along the way. It just eroded away more of the protective crust. We’re just older, more age-spotted, our immune systems as diminished as our illusions. We cover it all with b2 vitamins and are proud of our children’s past and hopefully future accomplishments.

Even as I write, my beloved, all-too-devout atheist son is at St. Thomas Episcopal glorifying the Sunday congregation with his violin, hours after sharing the stage with this decidedly non satanic tribute band to ELO in the auditorium, a few weeks away from refusing to parade with his promotion of the FPC, because that’s what he is, a non-conformist militant trying to escape from this prison of conformity.

He tried to hide his emancipation from us. It’s obvious he’s looking forward to it, even though he had bigger plans than UCF. He got into as many out-of-state colleges as he wanted, even in his nirvanah of New York. But we couldn’t pay. We dropped it. We’re in that donut income bracket, nowhere rich enough to pay more than in-state tuition, no longer poor enough to attract FASFC Mercy. And we don’t believe in graduating our children with the value of mortgage debt.

Luckily for our daughter, ten years ago our rudimentary tax filings could generate more substantial financial aid offers. It was what got him on the $60,000-a-year spree of his choosing (well, that and his best SAT scores). The ride took her 1,200 miles, then fairly well paid to push that 2,100 miles as she built her own family on top of her successes, every mile another kilotonne of blast zone for us, another acre of Eden for her: we could be Kuiper Belt garbage can 4 billion kilometers away for whatever interests him. But she’s fine, and soon we’ll be way beyond the Kuiper postcodes, so who cares? The eagle was not interested in the bloody history of Prometheus because it scratched his liver like a king.

My son and I haven’t had the benefits of a rocky relationship. We have not known a single day of war. Unusual for a couple of Lebanese blood, one more stubborn than the other, one more fiery than the other. At best, we had rare and forgettable skirmishes. But I knew the game was over when he first beat me at chess, around his eighth year, after I had beaten him about 900 times in a row, never drawing as much as a pawn. The only lesson I gave him in 18 years was, “get it.” He had. The rest was just counting down. This is how we have never been lenient with him, treating him as an equal in many ways from day one. It’s not like he won’t have to do the same with us when Cheryl and I return to diapers soon, although he has some work to do learning his resourcefulness. He can handle Sylvia Plath. I’m not sure he knows how to open a can of tuna. Obviously, he has his priorities straight.

But proximity has a price. I was hoping that over the past few months we would get into the kind of fights that psychologists recognize (recommend?) as the natural antibody to impending separation, to lessen the shock that might come. We weren’t so lucky. I tried. I failed at that too. And Cheryl and I picked the worst time to cut triplets.

So it’s unforgiving when a day like today finally happens, and nothing like the closeness we’ve known for 18 years – 18 and a half years, reminded me of the little shit just six days ago – don’t will happen again. Of course, we’ll stay close, and as a lawyer friend recently reminded me (I need help pleading God’s indifference), these aren’t the good old days of smoke signals, postal mail and “long distance calls”, this phrase from not so long ago that billed households with terror. But the zillion-apped closeness isn’t the same, and we all know that. Remembering a concert, even replaying it, is not living it, and at 3:30 p.m. today the fat lady – excuse me, the tall one – will finally sing.

What will I do? I will do what Michael Lambert did when he said goodbye to his daughter in college. He and I had just come out of a sentencing hearing at the courthouse, where he had managed to minimize the punishment of an idiot, a very young ex-cop, in part by tapping into his own wisdom as a father. . We started talking about the ups and downs of life, the business of “but for the grace of God” that we forget or so easily replace with unpleasant self-pity, our luck and finally what men talk about older at dusk: our children. Then this formidable lawyer, one of the best in the area, this veteran of countless criminal trials who is represented far worse than the Raskolnikovs of our society, told me that all he could do was sob when he was saying goodbye to her child when he dropped her off.

I’m not really going to do that. That’s what I have has been do, and for almost as long as this meteor began to be visible on the wings of fleeting time. At 3:30 p.m. today, Luka, who has grown a bit since this column was taken many years ago, will no longer be hanging from my shoulder. Time is up.

Pierre Tristam is the editor-in-chief of FlaglerLive.