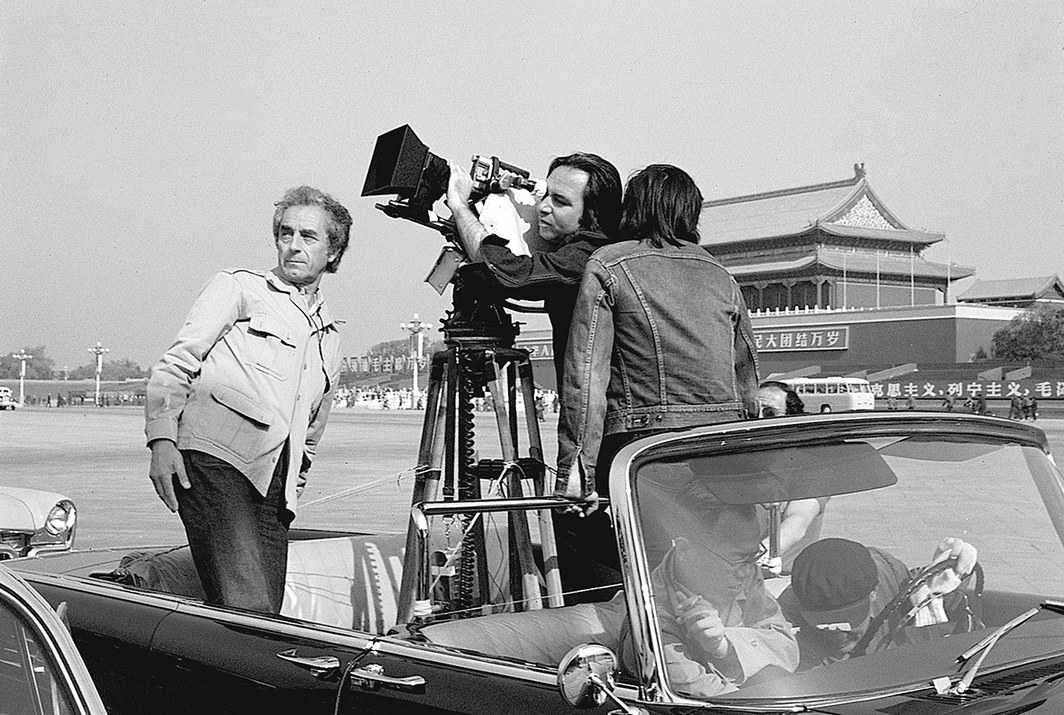 MICHELANGELO ANTONIONI ARRIVES IN CHINA IN MAY 1972, about seven hundred years after Marco Polo and a few months after Richard Milhous Nixon. The People’s Republic of China, established in 1949, was then emerging from a period of more than a decade of almost total diplomatic alienation, the thaw overseen by Premier Zhou Enlai with permission from the sick, senescent and increasingly erratic Mao Zedong after the official closure of the morally and materially catastrophic Cultural Revolution. During the previous period of isolation, few valuable images of China had been seen abroad, so the opportunity for Antonioni was unique. He was then fifty-nine years old and was one of the most famous filmmakers on the planet.

Traveling with his sound engineer, Giorgio Pallotta, his assistant director (and later his wife), Enrica Fico, his cinematographer, Luciano Tovoli, and a 16mm Eclair NPR light camera, Antonioni set out on an itinerary that took Beijing clustered in the northeast through rural Linxian (now Linzhou) in Henan Province and the Yangtze River towns of Suzhou and Nanjing, before finally ending in Shanghai. The footage of their journey was edited into three parts, each lasting over an hour. The first trip to Beijing and its surroundings, including visits to the Forbidden City and the Temple of Heaven and an excursion to the Great Wall. The second starts inland from Linzhou and goes up towards the east coast. Part Three lands in a Shanghai that is both familiar and unfamiliar: The historic Bund buildings look a lot like they were in 1935, but the mega-skyscrapers have yet to start rising from the sky. across the Huangpu River. All three episodes were broadcast on Radiotelevisione Italiana (RAI), the Italian public television channel, which at the time also subscribed to the cycle of austere historical films by Roberto Rossellini, works which are among the least-seen major productions of a famous director. that of Antonioni Chung Kuo ?? Cina (China) (1972) is another such film.

The cornerstone of Antonioni’s comprehensive retrospective at the Museum of Modern Art was a week-long stand of Chung Kuo ?? Cina, made up of six separate marathon projections of a 35mm unimpeded print. I don’t know how this should be possible from a film shot with light available in Super 16, but the finished film looks Italians, all soft pastels straight out of a quattrocento fresco. Fico said of her late husband in a 2013 interview, â€œHe was fascinated by Maoist clothes, their blue colors and worn textures; he zoomed in on the clothes to discover their elegant, but dusty colors.

Antonioni had been taken to admire the miraculous monuments of the People’s Republic, but his attention to the engineering marvel of the Great Leap Era ahead of the Red Flag Canal or the newly opened Nanjing Yangtze River Bridge in the second episode is devoted at best? , like everywhere else, he can’t seem to hide the fact that the feats of Chinese engineering he revere the most are hundreds, if not thousands of years old, as when the narration, written by Andrea Barbato and read by the director, raves about the “remarkable beauty” of Suzhou, a network of canals. More than anything, Antonioni is interested in the prosaic life of the Chinese people, in the unstructured daily activities that take place on the sidelines of his very structured tour The perspective of the film is resolutely, even provocative, fixed like that of a stranger, silently meeting and supporting the curious gazes of passers-by, one after another. The Chinese dialogue is not subtitled, and all information is filtered through Barbato’s commentary, which sums up the line passed to visitors by officials and offers Antonioni’s own unofficial observations of the party when he departs from the scheduled course to, for example, visit a farmer’s market to find a small piece of the old surviving individual entrepreneurial spirit in the form of barter. By avoiding interviews, Chung Kuo ?? Cina differs markedly from the 763-minute documentary juggernaut by Dutch filmmaker Joris Ivens How Yukong moved the mountains (1976), but the reason for Antonioni’s tactics is clear. He trusts the testimony of the camera eye to tell him something that no verified and supervised interview will do. Barbato later provides a final warning, taken from a Chinese proverb: â€œYou can represent the skin of a tiger, but not its bones. You can represent people’s faces, but not their hearts.

Antonioni was able to compete for such a coveted invitation, one can imagine, not only because of his international prestige, but because he had a reputation for being a man of the left. He had started his career as a documentary filmmaker with an eye for the oppressed proletariat, reporting on the fishermen of the Po and the street sweepers of Rome. Its fame, however, rests on a series of surprisingly original fictional films that applied a sui generis visual language to tales of anxiety, anomie and, in Alberto Moravia‘s words, “nameless and nameless anguish.” form “. These films take place for the most part (but not exclusively) among the upper middle classes of contemporary industrial society, in which the role of the camera was independent and at times seemingly opposed to the characters, positioning them not as commanding the center of the world. image but like furniture, like debris. His first arthouse blockbusters were made in his native Italy, but by the time Antonioni was getting his ticket stamped for China, he had already been shooting films abroad for several years ??Explode (1966) in Swinging London, and in the California counterculture, Zabriskie Point (1970), a film that ends with the massive demolition of Western consumer goods and commodities. Faced with such proof of the filmmaker’s appetite for destruction, a country still in the throes of the unleashed cultural revolution might have expected Antonioni to be a simpatico artist.

Whatever officials hoped Antonioni would deliver, Chung Kuo ?? Cina was not it. When the film was finished, an indignant patriotic Chinese people stood up to condemn it, not to mention the fact that few, if any, of its critics had seen it. (In this regard, our current cultural commentary on the trailers is not that far removed from that of the Cultural Revolution.) The trouble may have started with Mao’s wife, Jiang Qing, a former actress with a vicious interest in launching himself as a culture commissioner, who then wore his pants very well in the administration. The film was denounced in the People’s Daily. Luo Jinbiao, an attachÃ© at the Chinese Embassy in Rome who helped organize Antonioni’s trip, was sentenced to self-criticize in a study group. Reports were made of a popular song played in elementary schools in the mid-1970s, its title translated as “Let’s Make Antonioni Mad”.

The most potentially provocative aspect of Chung Kuo ?? Cina is overlooked in contemporary reviews of the PRC available in English, this being its insistent return to the theater theme. Each episode ends with a show: the first with a smiling puppet orchestra, the second a day outdoors in a Nanjing kindergarten, the third with a troupe of Shanghai acrobats plying their trade. Individually, these can be considered tourist attractions; collectively, they suggest a judgment on the observed society, a new society engaged in the role of “new society”. Combining this with a commentary that warns about the quality of the Potemkin Village charter tour, it’s hard not to feel like Antonioni is telling us something here.

Instead, in the February 22, 1974 edition of Beijing Exam, an English-language news magazine which, since 1958, has functioned as an official organ of the PRC for the non-Chinese speaking world, various authors seem concerned that Antonioni has made the country too dilapidated. A writer criticizes the photography of Tiananmen: â€œThe film was taken on a beautiful sunny day in May. Nevertheless, the Square is depicted in dark and dreary colors. The large square is presented in a haphazard manner as if it is a noisy confusion market.

Fang Chun-sheng, identified as an employee of the Beijing No. 3 Cotton Mill, complains, â€œAt a study meeting, we workers expressed our militant will to ‘weave cloth for revolution ‘and to’ contribute to the world revolution ‘. Antonioni said the discussions were “repetitive and monotonous” and “not a real discussion”. . . In the mind of this reactionary, to speak of revolution is “monotonous”. Does this mean that just talking about making money isn’t â€œmonotonousâ€? “

The study meeting in question, a sweet and placid affair, draws a comparative contrast to the convening of the campus that is opening Zabriskie Point, a student strike where participants bark for each other and the pulsating Pink Floyd from the soundtrack. Antonioni’s films in the industrial West are defined by the weariness of what he calls “dead time”, but also marked by violent explosions of noise ?? the persecuting cacophony of the Rome Stock Exchange in Ã‰clisse (1962), the industrial clamor of The red desert (1964), or the Yardbirds interlude in Explode. Chung Kuo ?? Cina is calm, even by Antonioni’s standards, and marked by a looseness that alternately seems serene and unnatural.

The images captured by Antonioni are not intentionally distressed, as critics of the regime claimed, although they may have seemed so, without an informative and exhorting narrative. Antonioni’s commentary is calm, without inflection, and the soundtrack is ambient concrete music. Each episode begins with a bang, the same song ?? â€Wo ai Beijing Tiananmen_ â€, Interpreted by the choir of the children of the Beijing railway workers ?? before shutting up, and most of them staying that way. The exceptions are the performance sections, such as the regimental march and the songs of the kindergarten children who, you may consider in passing, would have been in their twenties during the Tiananmen Square massacre in 1989. Like most paradisiacal imaginations, the ideal of a workers’ paradise offered to Antonioni and his team is both restless and rather withered. Sometimes the silence is deafening.