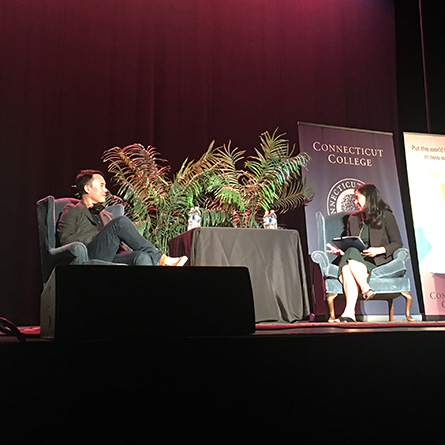 When the FBI reported in August that hate crimes in the United States against people of Asian descent were 70% higher in 2020 than in 2019, it told author Charles Yu something deeper than the response to the coronavirus pandemic.

“It feels like COVID is the thing that gives a reason, or permission, to people who may already have latent feelings to express these things,” Yu said in an interview ahead of his Oct. 5 appearance on the One program. Book One Region of Connecticut College. , held at the Garde Arts Center in New London. “I have a feeling that is not the only cause at all, but it stirs up something that is underneath – which is xenophobia.”

Yu’s Chinatown interior was the 2021 pick for One Book One Region, in which Conn’s freshmen do a shared summer reading with faculty, staff, counselors and community members. His fourth book is an allegorical novel highlighting the marginalization of Asians in American culture as told through Willis Wu, who sees himself as a “generic Asian” man. He was the 2020 winner of the National Book Award for Fiction.

While bringing up a heavy subject, Yu uses a light touch in Chinatown interior. As Connecticut College President Katherine Bergeron said at the event: “The author is having a lot of fun, sure, but the book is also very serious about getting involved – that is. say you, me, all of us – in the … the racism that kept [Willis] background.”

Yu, who also wrote for television, notably on the HBO series Westworld, said that “a lot of times when I really try to write something serious or heavy it just doesn’t work, it’s boring. So it’s usually when I take the gas off a bit and have a little more fun that I end up doing something that I find more interesting.

“I have been told by Asian American and non-American readers that this story is told about someone they might not have considered the protagonist of a story, and so that makes them feel less lonely, ”Yu said.“ That’s really it. To me, that’s what fiction does.

At the event, Yu answered questions from assistant professor of East Asian languages ​​and cultures Ayako Takamori. She told Yu it was like he expected Chinatown interior “Was the book we would need for 2020 and 2021”.

Yu said he was optimistic that there will be less marginalization in the future.

“All the undergraduates, they are from this generation that is so much more aware, so much more tolerant, so much more understanding from the point of view of others; they really embrace them and celebrate them, ”he said. “Please keep it up. “

One Book One Region is made possible by Connecticut Humanities; Eversource; Eastern TC Libraries; the Frank Loomis Palmer Fund, Bank of America, NA, trustee; Walmart of Waterford; and the office of the president of Connecticut College. Bank Square Books organized the purchase of Chinatown interior for the 2025 class and their advisers.