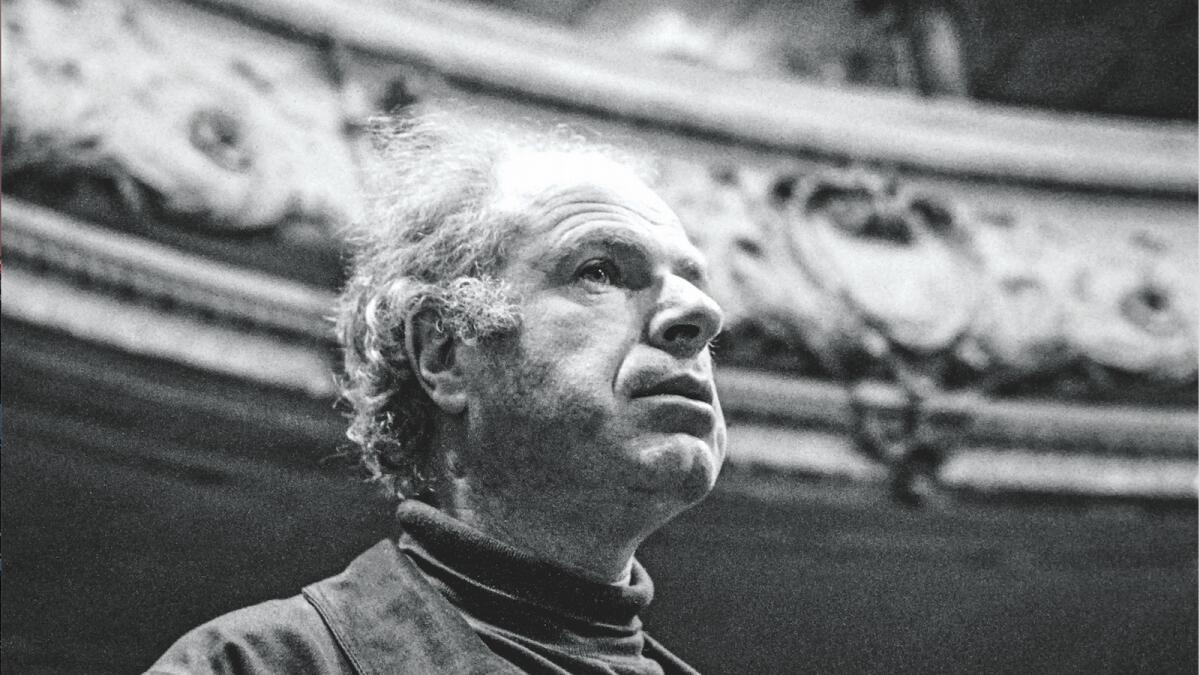 Peter Brook: the sage of the scene – News

The Englishman, who died on July 2, was one of the greatest theater directors of the 20th century

During the traditional curtain call at the end of a play, the actors led by the director greet and thank the audience. Amid applause.

But theater legend Peter Brook – who celebrated American film critic Pauline Kael as ‘the big old enfant terrible of English theatre’ – had other ideas. The final moments were crucial in letting the experience haunt the memories of the audience. Thus, in a radical change of convention, the last moments of Marat/Sade (1964) saw a virtual riot. As the audience rose to applaud the actors, still in their (asylum inmate) costumes, they were alternately scorned and mocked. Many wondered if the play was finished. Soon the steward lands there whistling and trying to end the turmoil. A few actors took off their wigs, others stood there watching nothing. Uncertain at first, the audience began to applaud. The actors came forward and clapped too, but it was mocking, rhythmic applause. Sections of the audience rushed in, some lingering to see the actors still on stage. It was not a performance they would easily forget. Critics called this “shock theatre,” but it was meant to let them feel and belong.

Now, it could be in a closed auditorium, a Greek theater — an open-air, semi-circular gallery — or in a warehouse. Maybe even on the lawns of a heritage building. For Peter Brook, all this space could have made theater – where anything can happen but something has to happen.

His creative devices have sometimes stunned theatergoers, but throughout the seven decades of his career, Brook has chosen unorthodox directing methods. He believed that the theater should be developed as a special place. “It’s like a magnifying glass, and also like a reducing lens…as we live less and less in villages or neighborhoods, and more and more in open global communities, the theatrical community remains the same: the cast of a piece is still the size it has always been. Theater shrinks life,” he writes in The Empty Space, an analysis of performing art.

Brook’s search for such meaning had begun early. Biographical sketches describe him as a seven-year-old boy who staged a four-hour performance of Hamlet in a toy theater; a young director who has worked with Alec Guinness, Laurence Olivier, John Gielgud and Vivien Leigh or a versatile professional who has dealt with the works of William Shakespeare, Bernard Shaw, Samuel Beckett, Jean Cocteau and Jean-Paul Sartre. His literary range was further diversified as he crossed continents at the head of the International Center for Theater Research, becoming familiar with many other cultures and philosophical ideas. Through this story-seeking journey, he reinforced his belief that theater is an intense bond between actors and audience. His contemporaries and those close to him often described him as a restless soul who was always looking for strategies to represent human dilemmas and challenges on stage. “Why?” was his constant password.

By asking questions, he had developed methods and concepts that stood apart from his early influences: the “method” of Russian theater practitioner Konstantin Stanislavski, who suggested that an actor’s authentic performance could get the message across; The epic or dialectical theater of Bertolt Brecht who chose to reject the plot and concentrate on the message by adopting techniques of “alienation” such as moving sets, half-raised curtains, placards showing what is going happening or actors playing multiple characters; Antonin Artaud’s Théâtre de la Cruauté, which aimed to destabilize the public; Samuel Beckett, whose Theater of the Absurd brought to light the irrational aspects of the human condition.

Over the years, he believed that actor-audience engagement would make a huge difference in ending the monotony that was setting in. For him, the life of a play began and ended “at the moment of performance”. If memories of the show stayed with those who watched it, it could be kept alive. An actor had to use physical movement to portray the state of the character. Without expression or body movement, there was no transmission of emotion.

The theater was therefore not about imitating reality. It was about reaching reality, or at least trying to. He cites an anecdote in his memoir, Threads of Time, to explain how he began to look closely at movie scenes. Once, while watching a trailer with his mother, he was struck by the image of a man pointing his gun at a girl’s head, “visible on a pillow in the dark”. “Where’s the key to the garage?” the man asked the girl and Brook was shaking too. Many years later, when Brecht tried to prevent the viewer from identifying with the events on screen, Brook said he was unconvinced. The identification was “much more subtle and subversive” than Brecht seemed to imply. As we take in our surroundings – whether in a movie theatre, at a play, or at home in front of a television – the mind always attaches us to the action. “One gun, one clenched fist, and the illusion is complete.” The connection is established.

And so, there was no room for lockers. No ranking. No ideological basis either. His productions were modern and went beyond the traditional using mime, folkloric elements, myth and language. His scenography consisted of astonishing images and spaces; sometimes the nuts and bolts or the mechanics of the scene. Its adaptations varied by location and time – the versions of The Tempest were separated in treatment, time and location. His intrinsic art was to reduce a story to the essentials and to simplify the production by allowing interaction with the public. When a story was stripped down to its essentials, its essence showed. Like the series of lithographs by Pablo Picasso which represents a bull at different stages of abstraction. From a robust animal that could be distinguished by traits to the slow loss of characteristics and finally, to a few physical lines that simply suggest it is a bull. It is this transition – indeed from proper name to common name – that deepens and broadens understanding. Many scholars and critics have seen this progression in Brook’s interpretations – be it King Lear, The Cherry Orchard or the Mahabharata.

Some of Brook’s important plays show his flight path in the world of theatre: from early adaptations of Shakespeare to radical departures from set design to more complex, non-conformist themes. But no matter when the play was written and what period it depicts, he believed that the sense of “it’s all happening now” must prevail. Shakespeare, in his vision, is not new.

Take his adaptation of A Midsummer Night’s Dream, a groundbreaking production where he and designer Sally Jacobs created a huge white box for all the action, making it contemporary and dynamic. The box had two doors and no ceiling. The fairies were swinging on trapeze bars and juggling plates. The costumes came from different times and places. A large red feather made for Titania’s arbor. And for the curtain call, when the lights came on and Puck recited the lines, “Give me your hands, if we’re friends,” the entire cast rushed over to the audience and shook their hands. hand.

This was the case with Marat/Sade or its full title, The Persecution and Assassination of Jean Paul Marat interpreted by the prisoners of the Charenton asylum under the direction of the Marquis de Sade, set in 1808 in France. Written by Peter Weiss, it used a game-within-a-game device, apart from songs that comment on society and politics – much of which resonates with universal references.

Perhaps the most ambitious of his projects was the production of The Mahabharata (1985/film version in 1989), an ancient Indian epic which involved a nine-hour narrative. It had a multiracial cast of 21 actors from 16 countries and was staged in a quarry in Avignon, France. For Brook, the monumental text was fundamentally about moral dilemmas, about power and righteousness. There was room for various other interpretations, but at bottom it was about duty and responsibility in the face of the tragedy of the conflict. Reading the epic again, Brook mixed the grand scale of mythology with the real as much as the metaphysical.

The ruins of Persepolis, once the capital of the Persian Empire, were also featured on Brook’s Deep Voyage map. Orghast, staged atop the Mountain of Mercy, was designed just for this location. The show was not meant to go anywhere else. Written in collaboration with poet Ted Hughes, Orghast is about Prometheus, the Greek god of fire. He employed a newly created language, punctuated mostly with shouts and sighs. Not Esperanto drama, but a way to use “unidentifiable words in a certain way,” Brook said. All of this raised the question: can we do theater with sound instead of language?

Geographies past, Brook also delved into the mental landscape. The Man Who: A Theatrical Research was based on neurological case studies by Oliver Sachs in The Man Who Mistook His Wife for a Hat and Other Clinical Tales and dealt with complex realities of the mind. Studying how the brain works was like visiting a “valley of wonder”. For the public, there was no better way to understand patients and pathologies.

Even at 93, Brook would not rest. In The Prisoner he became more reflective, questioning concepts like justice, redemption and freedom. Does freedom consist in not being captive or bound? He drew the story from his travels in Afghanistan, a strange episode of a man doomed to sit outside prison and deal with it. With Marie-Hélène Estienne, who has collaborated with him on numerous screenplays, Brook has woven a dramatic piece that hauntingly reminds us of our moral duties.

He had a sense of the image and this extended to the cinema, but many works are filmed versions of his plays. An original film that stands out for its artistry is Lord of the Flies (1963), based on William Golding’s classic about a group of schoolboys shipwrecked on an island. It’s a rather brutal commentary on our definitions of civilization and savagery, shot in black and white. The extensive use of a handheld camera gives the film a documentary feel. As if to respond to his early fascination with the medium, he chose to use sound and light in an imaginative way. For example, he avoided showing the slaughter of pigs in one sequence, resorting only to sound effects. It was enough to have an impact.

He could literally travel for miles to explore ideas. During a long three-month trip through sub-Saharan Africa with a group of actors, Brook discovered the value of a carpet as a theatrical space. As the puzzled villagers watched, the rug took on a metaphorical meaning. It served as a mobile podium; it worked as an accessory and, above all, it delimited the space.

On open ground or on stage, Brook lets his actors do their thing. And let his audience feel. In this core role, he brought us a sense of wonder and reflection. It was his way of seeing – global, intercultural and polyphonic – that made the difference.