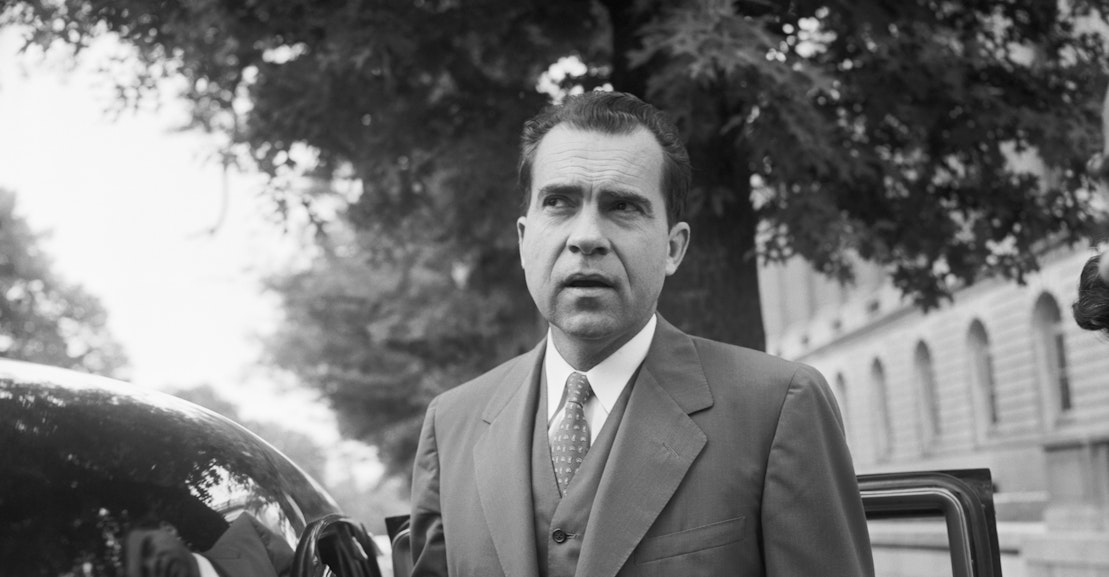 What matters is that in public life, men learn to play tricks with their troubles, and other men learn to praise them for it. This is how Mr. Keogh can quote, without any evidence of moral turmoil, Nixon’s former associate who recalls that as a young lawyer, the vice president “had courtroom psychology. He could talk so the butter wouldn’t melt in his mouth, or he could grab a cantankerous witness and shake him like a dog. For example, Mr. Keogh can cite as an example of Nixon’s campaign speech “Adlai the Soother…who got a doctorate.” of Dean Acheson’s ‘College of Cowardly Communist Containment’ while continuing to describe the vice president as a man of sensitivity and conscience. This is also how Mr. Toledano can say that Nixon was fighting those Americans who urged that “the United States should recognize Red China…should oust President Rhee, should bow down to India at all costs.” Who made this country bow down to India “at all costs” and what “at all costs” means in this context, Mr. Toledano does not say. I don’t think he can either.

In the nightmarish world of mass culture and ad agency politics, it becomes impossible to distinguish between the manipulators and the manipulated. Surely everyone has heard a television or radio listener say about a particularly clever advertisement: “Oh, that’s good psychologywithout even realizing that it is on himself that “psychology” works. So it is with the speeches of the vice-president: the process of mass agitation and the process of self-deception tend to become inseparable.

Except, I would say, in one case. Mr. Toledano makes it perfectly clear that in his dealings with McCarthy, the vice president knew exactly what he was doing. “Nixon,” writes Mr. Toledano, “felt some responsibility for McCarthy or any other individual who had engaged in the struggle against communism.” When “Nixon offered to use his files to document his accusations, McCarthy gratefully accepted his offer…”. Friendship warmed up. Later, after bringing McCarthy together with top administration figures but failing to cement an alliance, he advocated a policy of piecemeal cooperation with McCarthy: “support him when he was right… criticize him when he was wrong. It was only after McCarthy forced a pause that Nixon said (apparently in a statement to Mr. Toledano) that “McCarthy’s intentions were good, but his tactics were, frankly, at times so inane that he probably did more harm to our cause than good.”

Book Review: In a dazzling sci-fi novel, sympathetic characters challenge their assumptions about human life and the passage of time | Books