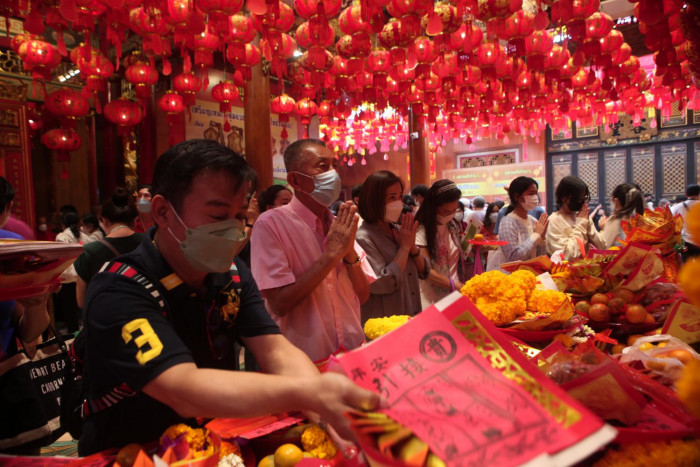 Since the start of the Chinese New Year, devotees have flocked to Wat Mangkon Kamalawat – also known as Wat Leng Noei Yi in Chinatown – to pray and ask for blessings for the months ahead.

Every February, the temple, widely regarded as the kingdom’s holiest Chinese shrine, welcomes throngs of visitors from across the country – all hoping to take part in a ritual to dispel bad luck from their lives and pray for prosperity. for the coming year.

The ritual is among the activities that traditionally take place right after the New Year. In Thailand, many observe a tradition called kae chong — which means “neutralizing misfortunes” — to ensure luck in the months to come, and to avoid pi chongor “the cursed year”.

the Bangkok Post recently spoke to temple devotees in the Pom Prap Sattru Phai district to get their perspective on the long-standing tradition.

A group of temple sisters said they had come to pray for a prosperous life, hoping that the gods enshrined at Wat Mangkon would help their new business of second-hand printers take off.

According to Chinese astrology, those born in the Years of the Monkey, Snake and Pig will face adversity in the Year of the Tiger.

One of the sisters, Thananith Teeraphanjavitt, 55, said she felt compelled to seek blessings from the temple as she was born in the Year of the Monkey.

Ms Thananith said the best time to ask for blessings is 15 days after the Chinese New Year when the gods descend from the heavens.

“Vendors and those born in ‘cursed years’ are advised to seek the blessings of the gods on this day,” she said.

She also said those born in the “cursed years” should avoid going to eat at funerals, as well as refrain from combing their hair to help ward off the bad luck of the year.

That said, her sister Kamolluck, 68, said she was indifferent to the concept, saying good things can also happen to those born in a “cursed year”.

“I was born in an unlucky year. Surprisingly, this year my things are going well,” she said.

Another visitor, Kamonchanok, 36, agreed with Kamolluck.

“Like this year, for example. According to the Chinese zodiac, this year is supposed to be my unlucky year,” she said.

”However, I made a nice profit from the trade, my sales increased and I had the opportunity to grow my online business.

“I also won the gold lottery on New Year’s Day.”

Instead of hoping to ward off bad luck, however, she said she came to attract good karma.

Unlike Kamolluck and Kamonchanok, Rattana Rengluckrungrod, a 67-year-old trader, said she was a firm believer in the concept of pi chong.

She said that in her unlucky years she always felt the need to “exorcise the demons” from her life.

“In one of my ‘unlucky’ years, I didn’t come to pay homage to the Chinese gods at the Chinese temple, and I also went to the funeral that year. When I got home, I fell and I broke my arm,” she said.

“Since then, whenever it’s my pi chong, I avoided funerals and prayed at the temple. Things gradually got better after that,” she said.