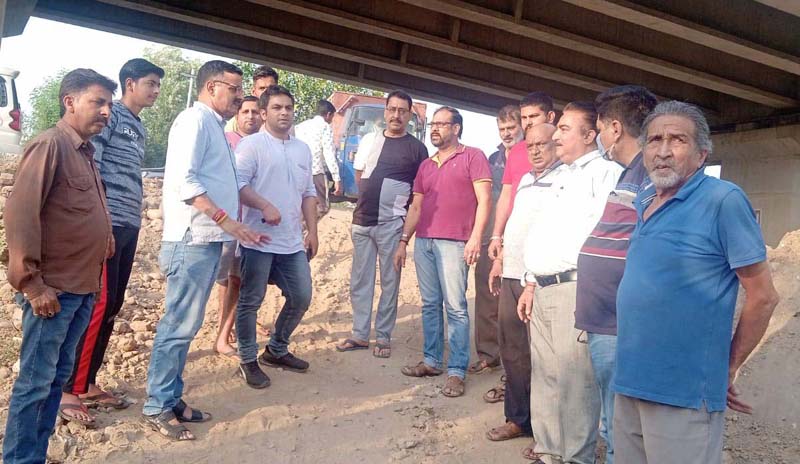 Excelsior Correspondent
JAMMU, April 29: The public are suffering due to the indifferent attitude of the National Highway Authority of India (NHAI) said Sanjay Kumar Baru, senior BJP leader and JMC Councilor of Ward No 41 during the road visit Akhnoor from Kamla Palace Road to Paloura BSF Market with BJP District General Secretary Karan Sharma, Chairman Paloura Market Ashok Singh and Youth Welfare Committee, Wazir Lane under Jammu West Assembly constituency.
Sanjay Kumar Baru said that the general public was suffering greatly due to the indifferent and callous approach of the personnel involved in the ongoing Jammu Akhnoor road four-lane construction project.
He regretted that the various development projects, especially for road widening, have been taken over by the BJP-led central government, but the ruthless approach of the officers involved and the contractors concerned are causing inconvenience to the road commuters. main and smaller broadsides. with the main highway.
He pointed out that the connectivity of minor roads with the main road is not supported. The ramp or the connectivity slopes are not concreted but only temporarily constructed with the heaps of sand or gravel and are steeply inclined and cannot be climbed by two-wheeler or even four-wheeler. This engineering mishap by relevant authorities causes daily incidents, he added.
The BJP leader pointed out that the matter has been raised in front of the concerned high authorities but they are not listening and even verbally refused. “Are they expecting a big crash or loss of life?” he asked.
Sanjay Baru also raised the issue of service road encroachments along the newly constructed road, especially near markets like BSF, Ploura. He said it is unwise to suppress encroachments now rather than face unrests in the future?.
Raman Koushal, Mandeep Singh lovely, Dalip Mitas and locals were also present during the tour.