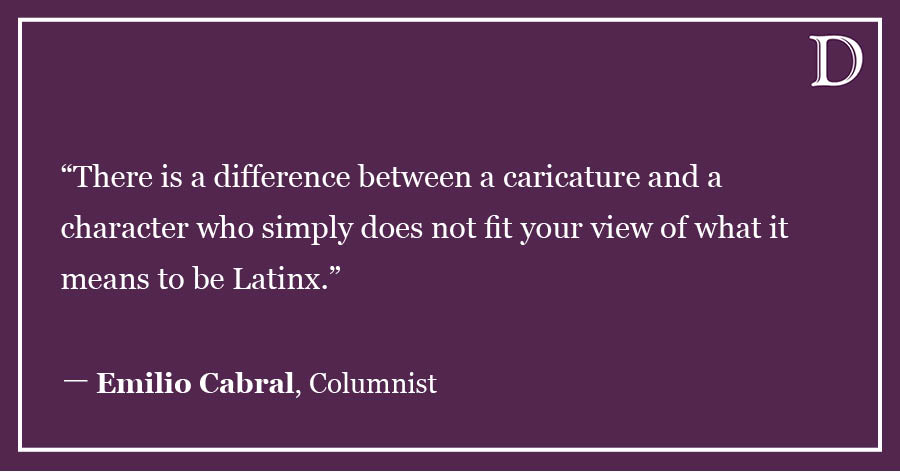 When I picked up Casey McQuiston’s debut novel, “Red, White & Royal Blue,” from League City, Texas, Barnes & Noble in the summer of 2019, I knew it would be one of my favorite books.

It wasn’t the first commercial fiction novel with a main Latinx character that I had read – that honor goes to Rick Riordan’s “The Lost Hero” – but it was the first time I was old enough to understand the importance of reading a book centered on the experiences of a person who looked like me.

But even though Alex Claremont-Diaz – the book’s main character – is widely hailed as charming and nuanced, people still find things to criticize.

This spring, one of my best friends showed me some TikToks discussing the lack of depth dedicated to Alex’s Latinx heritage. TikTtoks claimed the lack of pages dedicated to unraveling the complexities of Alex’s relationship with his Latinx identity was insulting given that, in the real world, his status as a queer person who is also Latinx would undoubtedly shape his experiences. .

But after re-reading “Red, White & Royal Blue” over the weekend, I disagree with claims that Alex’s Latinidad isn’t fully explained. Throughout the book, he seasons ribs with traditional Mexican spices, points out how his mother’s political opponents use his and his sister’s racial identity to wage smear campaigns against her, and wonders if his liberal father will still be able to put aside his machismo when his son is the one who comes to him. Every aspect of Alex’s identity is treated with the care it deserves.

In April 2021, McQuiston sat down with the Wellesley Book Club and discussed the process of creating the character of Alex and his story. Not only has McQuiston talked to different Texan Mexican friends about their specific experiences, but they’ve also watched videos of various Texan Mexican bloggers who discuss confronting racial identity as a Latinx person. Additionally, before putting the finishing touches on his manuscript, McQuiston hired an authenticity reader to ensure that Alex was an accurate representation of a Mexican American young adult.

I believe the criticism of how “Red, White & Royal Blue” handles Alex’s ethnic and racial identity stems from the fact that many readers believe a book should devote a certain number of pages to the struggle of a Latinx character with Latinidad to be considered a true representation.

There are various books that do this and do it well – Benjamin Alire Sáenz’s book “Aristotle and Dante Discover the Secrets of the Universe” immediately comes to mind – but classifying books with Latinx characters in this way implies that there is a universal Latinx experience.

Some Latinx people will relate to Ben Alejo from Adam Silvera and Becky Albertalli’s “What If It’s Us” – a story about a young Puerto Rican boy who feels estranged from his heritage because he doesn’t speak Spanish. Others may find themselves better represented in Julian Winters’ novel ‘Right Where I Left You,’ which highlights Isaac Martin – an Afro-Latinx teenager – as he bridges the gap between the two sides of his family. . And Erika L. Sánchez’s “I’m Not Your Perfect Mexican Girl” is a warm hug for all Latinx teenagers under the weight of their parents’ expectations.

Not only is it unfair to rank Latinx characters and novels by how much they align with your specific experiences or viewpoints, using that as the sole measure of a book also reinforces the idea that all stories Latinx must somehow be overtly tied to identity.

We are not a monolith. Because our stories aren’t the same, neither should the stories written about us be. Books like “Red, White & Royal Blue” aren’t written to be so generic that they encompass the experiences of every person who reads them. They are written to evoke specific emotions based on the very specific world contained within their pages.

Harmful Latinx caricatures in books are so plentiful that it would take me over 700 words to list them all. But there’s a difference between a caricature and a character that just doesn’t fit your view of what it means to be Latinx. Although you, as the reader, are free to operate at your own discretion when it comes to the books you read, I ask you to consider whether declaring the depiction of Latinx in the books “harmful” or “missing” because she doesn’t meet your criteria stems from a caricature of Latinx people that you created in your own mind.

My husband said I missed this sticky situation