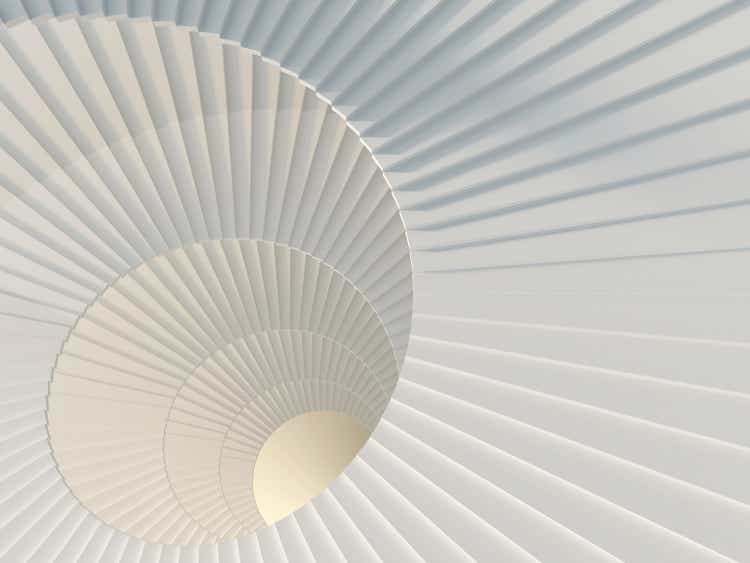 Round bottom | Looking for Alpha

A week of era-defining contrasts: A Russian president launches an invasion of a sovereign nation ahead of schedule; and a (former) US president cannot launch a microblogging platform in time. At least our innovators will continue to inspire us. My favorite headline this week: “Artist Blows Up Lamborghini Huracan to Sell Shrapnel Videos as NFT.” But I digress.

What fortunately diverted my attention from the large-scale war in Europe is explained below. As in watch below. Well below.

They are not cryptocurrencies. It’s stocks – a lot of them, large-cap stocks. OK, there’s a few meme stocks in there, but there’s a mess of good, if not great, companies that have lost more than two-thirds of their market value: PayPal (PYPL), Zillow (Z), Bumble (BMBL), Roku (ROKU), etc. Add the above losses together and you have… $2.2 trillion. Thus, the aforementioned companies lost the equivalent of Canada’s GDP.

History does not repeat itself, but it rhymes. Check that – it repeats. If you’re too young to have seen Heathers, what is happening may seem alien or as if it will soon return to “normal”. But if your perspective is broader (i.e. older), you probably recognize what the start of a bear market looks like.

The last big swing in the market followed the crash of 2008. For the tech, it was just a speed bump, not a tractor-trailer stack. We need to go back to the turn of the millennium for a deep and cyclical technological transition. The year 2000 feels great: record venture capital funding, record dropout rates, day trading frenzies, a mass technology movement that promises to better humanity. BTW my favorite movie of 2000 was Magnolia. That same year, I moved to New York to join the NYU faculty and experienced a 95% decline in (paper) wealth. Good time.

Public markets synthesize billions of signals every second and distill those bits and emotions into an indifferent number that indicates direction. Private markets take longer to reflect reality because private property changes hands less often and goes unnoticed. But private markets inevitably align, and just like the tail of a whip, the smaller market can be more painful.

Growth hedge funds record their worst numbers in years. Earlier this month, Tiger Global announced that it was withdrawing from funding large, late-stage startups. Just like D1 Capital, another growth specialist. Q: Why? A simple. They believe there is now better value in the public markets.

If you’re under 35, the year 2000 might as well have been the Middle Ages, which means founders/CEOs are about to add a new phrase to their vocabulary: “down round.”

For two decades, the script, the lighting and the backdrop have all centered around one narrative: Growing up…at all costs. No more raising, hiring, building – the fun parts of running a business. All the while, investors rubbed the CEO’s little backs and channeled their inner Billy Joel: “I love you the way you are…”

Tales from the Crypt

There’s no way, short of experience, to appreciate how violently things can turn out. I’ve been on this ride: it’s nauseating, and even though it’s lightning fast, it feels like it’s never going to end… the leverage goes from ideas (founders) to capital (investors ). In a bull market, money is everywhere, chasing after ideas and founders. When money is scarce, its stewards increase power. Adam Neumann may have been the peak founder; high-voting stocks and his investors’ fear of losing face gave Neumann leverage that earned him a 10% commission on $12 billion in losses. This pivot of advantage, like the pendulum of a clock, is rarely balanced. Asymmetric advantage can and will backfire on capital.

Power is the medium through which this conflict is played out. Turn on the caps table, on the board, to determine the exit and who gets cash. Dilution becomes punitive as capital becomes more expensive. Companies are forced to raise funds at a lower valuation than their previous round: the dreaded “down round”. But they have no choice, because they are built to burn and need fuel. Thus, investors are taking larger and larger shares, while the founders’ shares are shrinking. In three rounds of financing from 1999 to 2002, onerous terms (see above: asymmetric leverage) reduced my stake in Red Envelope from 30% to 6%.

After years of acting as doormen, DJs and disco-party dealers, venture capitalists are beginning to chastise CEOs for outsized spending and demanding that they sober up. Boards are rightly asking management to develop a plan that recognizes the new reality, which in Latin means “people of fire”. Over the past three decades, I estimate that I’ve (personally) hired over 400 people and fired 100. That’s still horrible. It never gets easier.

Founders are rarely fired, but you should expect to see an increase in tweets announcing how thrilled these 30-something prodigies are to have the wisdom of a new CEO (whom the board has forced above them). The share of late-stage founder-led startups has increased, but that will end this year. Prediction: By 2025, the trend in the chart below will be sharply downward.

If this is the start of a correction, Big Tech will (expect) be a winner. For years, the narrative has been how hard it is to hire talent and how startups with unlimited upside poach established players. In 2001, B2C and B2B (as in business-to-business and business-to-business commerce) went from being the two pillars of the dot-com enterprise-backed boom to being derided as “return to consulting” and ” back to the bank.” This time it will be B2BT.

A host of illusionist tricks will be deployed to mask what is really going on in the private markets. Transactions will be structured so that the overall valuation remains high, but the terms – liquidity preference, control mechanisms and transaction structures – will radically alter the economics and governance. The next step is euthanasia. Expect to see plenty of unicorns purchased for undisclosed amounts. The deals will be presented as strategic, but in reality they will be acquisitions. Top talent gets new options on more viable equity, lawyers pick the patent portfolio, and everything else is quietly shut down. Peace with honor, sort of.

As you read this, an ill-fated partner of Andreessen Horowitz is offering a Web3 holding company on a real-time social audio platform that would be synergistic – and it can be yours for the price of money on the balance sheet. Terms of the agreement will not be disclosed. We will also see a lot of venture capitalists disappear. Money has been pouring into seed investments for years, but like private markets, so have VCs. With less money looking for a shepherd, new entrants and weaker brands will be unable to raise another fund.

I still shiver at the memory of calling a third of my first startup’s employees into a room and telling them they were out of work. It was awful, especially because I knew I was the person in the room who lost the least that day. But we couldn’t afford them, and if we hadn’t fired them, we would have closed the whole company six months later. Instead, that company is now a $100 million+ business with offices on three continents, employing many more people than the day before a third of the team was laid off.

Your business is not your family and your job is not your life. In this cycle of growth, the workplace has erratically become a platform for your conscience and political beliefs. This is not the case. Your work may be the ink in your pen, but it’s not your story. And despite the Hallmark Channel’s version of the job, where the management wraps themselves in progressive coverage and pretends to give a damn about your views on societal issues, don’t put your all into the work. It’s not your family…it’s a team. Do what Jack Grealish did and go where the opportunity is. I’ve been fired, kicked off boards, had VCs hire Kroll to try to bully me, and put companies into Chapter 11 receivership. It all hurts, many. But each setback presented an opportunity, a new perspective, and a chance – even if it was unclear at the time – to allocate my human capital elsewhere with a better return.

“Hi, this is Nurse Amanda from Gulfstream School. Your son threw up in class. Poor guy isn’t feeling well – can you pick him up?”

Ughhh… I hop in the car and at school I meet Nurse Amanda and a pale, sweaty 11 year old. He has a van strapped to his back and is holding a single-use neon blue plastic bag. Nurse Amanda advises her to drink plenty of fluids and stay home tomorrow.

We get in the car, and before I can reassure him, he blurts out, “So I started feeling nauseous and I went to Mr. Matthew’s office and…dad…started throwing up. So…it was like a dragon’s breath, and everyone was scared of me. The class started screaming, so I started running after people while I was throwing up. There is real pride in his voice as he guides me through his bacchanalia.

Of course, I ask if he caught anyone. He gets serious. “Ethan…He’s slow.

I had to stop, I was laughing so hard. Once I caught my breath, I looked up to see my son staring at me with the type of awe you register when you see something amazing for the first time. I don’t laugh much. He seemed so happy… that I was so happy.

This Friday, we will meet in the school chapel, and they will read out the names of all the fifth graders who made the heads up list. Last semester, my son’s name was on that list. Not that term. But everyone in this chapel will know that I am the father of the boy who used to hunt children to throw up on them.

I don’t think it’s possible that he knows how much joy he gives me. What does all this have to do with collapsing markets? Nothing. But nothing really important either.

Editor’s note: The summary bullet points for this article were chosen by the Seeking Alpha editors.