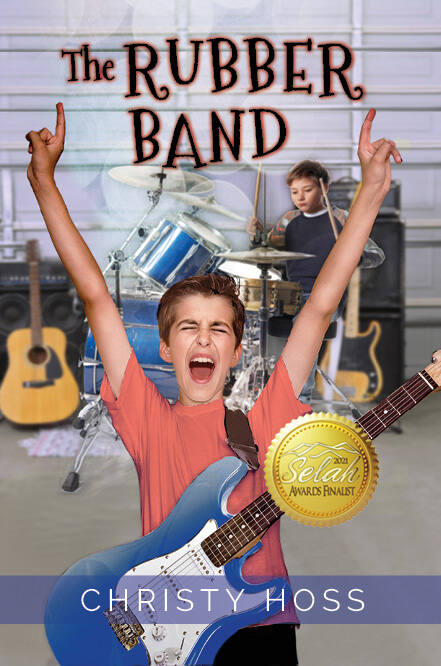 Christy Hoss, formerly a teacher at Kenwood Elementary School, has followed one of the most basic writing rules to create an incredibly successful children’s series: Write What You Know.

Set in Wildwood, the series follows an unlikely group of elementary school students from different backgrounds and experiences, united by the goal of performing in the school’s talent show as The Rubber Band. The first book focuses primarily on Eddie, Oliver’s identical twin, who helps form the group with “a motley group of elementary school kids.”

The reason Hoss’s writing reads well and appeals to its audiences is that the experiences and the world she writes about are drawn from her own experiences. She drew much of the inspiration for the book from her experience as a teacher.

“There is so much going on that you know, that the kids might share with you or that you talk about or just saw,” Hoss said. “I knew Kenwood. I was here. I was immersed in it. I know the community, I love the small town that it is. It’s just a very tight and close place. And I wanted to make it stand out in my writing.

Kenwood and the rest of the Sonoma Valley are the inspiration for the town of Wildwood, the setting for the series. Hoss based Eddie and Oliver, two of the main characters, almost entirely on the students she had in her freshman year at Kenwood Elementary School. Not only that, but the elastic came from a talent show hosted by the school.

“I was looking for a good story and a montage in the morning, it was a taste of our talent show.” Hoss said. “The last act was called The Rubber Band. And it’s a group of fourth and fifth graders. They went out and played ‘Born to be Wild’ like you wouldn’t believe. It was so professional.

Hoss marveled at the group and immediately stood up to play with the group. She asked if they would be playing her 50th birthday party, then chewed up the potential of the story.

Burying herself in Hoss’ mind, she went to a writing conference and pitched the idea to an editor. Even before she wrote the book, she sent a proposal to the publisher and the elementary school story began its print journey. Hoss, who earned a journalism degree and spent his young life dreaming of becoming a writer, resigned shortly thereafter.

“To read a good book, it’s an escape,” Hoss said. “And, for me, writing is also like an escape. When I was a young girl in third grade I started writing stories and I would sit at a desk and not stop until this story came out of my head. I just wrote, wrote furiously until I had calluses on my fingers and I understand why I did it now. It’s a creative outlet, a chance to use your imagination, and a way to get away from it all. I don’t need to escape to my fantasy worlds, but it’s really a lot of fun.

Fifteen years ago, while teaching at Kenwood, Hoss began to reimagine her dreams of becoming a writer. She began taking writing classes and attending lectures, intending to be a novelist. Now that she writes children’s books, she sees an even greater challenge and reward in her career.

“This is my opportunity to reach out to young people in a positive way and try to inspire them because the world is so negative,” Hoss said. “We need more positive things there. I think anyone can write a romance novel, but writing for children is a challenge. You have to be engaging. You have to be at their level. I just like to be upfront and frank with them and deal with the issues they are facing. They face life like we do every day and it’s tough. So why not talk about difficult issues like foster care, illness and other things.

The Rubber Band was a finalist in the 2021 Selah Awards competition and received a Gold Readership Seal. The series is available on Amazon and local bookstores, and a third book is slated for release in the summer of 2022, “The Rubber Band: Slingshot Summer”.