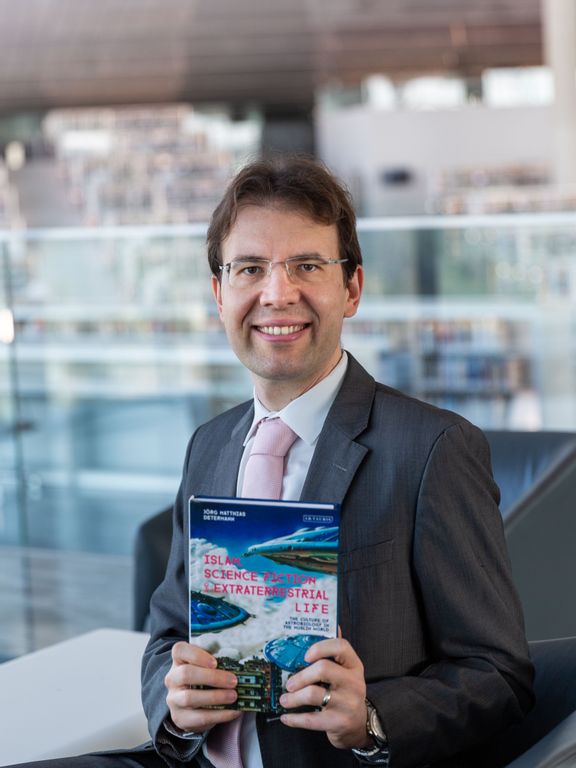 At first glance, there is nothing extraordinary about a historic photo of King Faisal from Saudi Arabia. Until you notice Jedi Master Yoda, a character from the popular “Star Wars” universe, hovering over the king’s shoulder.

Yoda is so imperceptible that the altered image of the 1945 United Nations meeting was accidentally printed in Saudi textbooks in 2017. The Saudi education minister was forced to apologize. The incident, however, suggests how science fiction can easily be found immersed in modern cultures and indeed Middle Eastern consciousness.

Artist Abdullah Al-Jahdhami Shaweesh’s image was inspired by a historic photo of the President of Egypt Anwar Sadat “Meet” Mickey Mouse and Pluto the dog on a trip to Disneyland in Anaheim, California. The two images with Yoda and Anwar Sadat are in the new book, “Islam, Science Fiction and Extraterrestrial Life: The Culture of Astrobiology in the Muslim Worldâ€, Written by JÃ¶rg Matthias Determann and published IB Tauris.

The exchange of ideas between the West and Muslim cultures through science fiction and the study of UFOs is one of the key themes of Determann’s book, which also suggests that the influence has been in both meaning because Islamic history, culture and beliefs have also influenced science fiction in the west.

â€œAs a result of this exchange, we find in history very strong notions of Western countries and Islamic lands as separate ‘worlds’ or civilizations,â€ Determann told Zenger in an interview.

â€œToday, astronomers who study exoplanets and scientists engaged in the Extraterrestrial Intelligence Research (SETI) try to discover other worlds and civilizations in space. Nonetheless, sci-fi creators still use cultural references to Earth in their imaginations of other planets. Therefore, the creators of “Dune” and “Star Wars” drew heavily on the Middle East in their construction of plausible desert worlds like Arrakis Where Tatooine. “

Even HG Wells “War of the Worldsâ€, A seminal work of science fiction in the West, includes a reference to England’s first mosque.

Sometimes the creation of a fantasy world is a metaphorical substitute for offering commentary on one’s own society. The book cites several examples where Muslims living in authoritarian countries have used science fiction to offer political commentary. Yet the roots of this practice, Determann’s book suggests, can be found in Western philosophy. Works such as Montesquieu’s â€œPersian Lettersâ€ and Voltaire’s imagined dialogue between a Jesuit and a Brahmin can be considered in this regard as proto-science fiction.

â€œDespite the influence of conservatives, I maintain that the Islamic tradition has generally supported extraterrestrial life,â€ Determann said. â€œIn fact, they are sometimes even Islamists, envisioning and promoting various Islamic futures and worlds. “

An example of this offered in the book is a play written in prison by a member of the Muslim Brotherhood, an Egyptian Islamist group. The play, titled “The Fifth Dimension”, uses the tropes of science fiction to offer a critique of the Cold War from an Islamic perspective. In the play, part of which was originally written on used cigarette cartridges, three space travelers – one Soviet, one American, and one German – experience the beauty of Islam on a trip to another planet. .

Starting points for speculative science fiction or amateur Muslim ufologists can be found in the Koran, who speaks of God as the Lord of more than two worlds and also speaks of the jinn. While in Western pop culture the jinn are little more than the geniuses of 1001 Thousand and One Nights, in Islamic theology the concept is much more nebulous and is more of a catch-all term for all sensitive life. human – some Muslims, some not. .

As a result, in popular Muslim religion around the world, jinn have been described in various ways. Determann’s book says that a 1983 issue of “Flying Saucer Review” noted that jinn have been described over the years as invisible, shape-shifting, responsible for kidnappings, telepathy, and romantic relationships. occasional with humans – all attributes also attributed to aliens.

Attitudes towards science fiction can also change quickly. The Saudi Science Fiction Novel “HWJNâ€Became a sensation in Saudi Arabia when it was released in 2013. The book features a chaste romantic relationship between a jinn and a human. Although the book’s popularity initially sparked a ban and backlash, it didn’t last long – in 2019, plans to make it a TV series in the kingdom were announced.

Not all of the groups Determann studied are located in the Middle East either. The book also discusses the important role of UFOs in the belief system of the American Nation of Islam. Nation of Islam leader Louis Farrakhan claimed to have visited a UFO on a trip to Mexico in 1985.

â€œThe Muslim scientists and artists I study in this book seek to push the boundaries of knowledge but are not anti-Islamic; their work is not seen as conflicting with traditional values. Far from it, it is often an exercise in forward thinking, â€said Determann.

Edited by Matthew B. Hall and Kristen Butler

Recommended by our partners