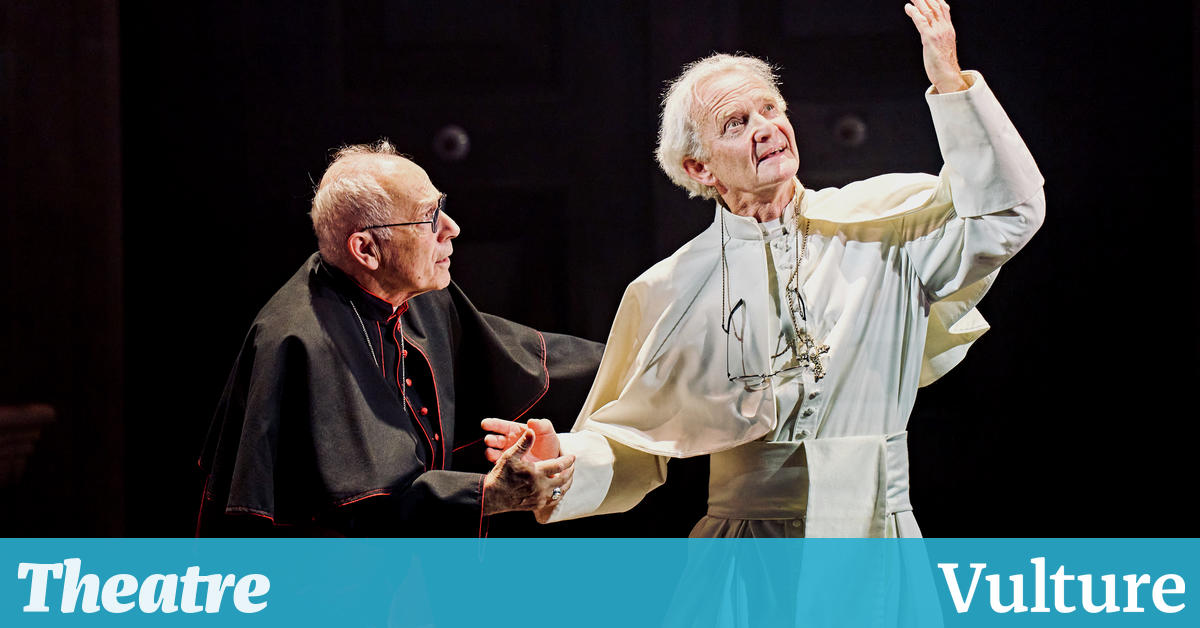 The Two Popes review: immersive and entertaining but let down by an unsatisfying ending

Popes do not resign. Or at least they didn’t, for 700 years, until February 11, 2013. James Dacre’s production of The Two Popes, now showing at the Cambridge Arts Theater, covers what might have made someone break such a venerable tradition, and the mysteries behind the troubled man who made it. The play offers insight into the tradition, history and performativity of the Catholic Church: it covers both religious frustrations while featuring two popes enjoying the banality of life, indulging in fine wine and good music.

Dacre’s interpretation is made up of humor, dry wit and glimmers of sincerity. It captures the contradictory nature of Pope Benedict XVI, portraying him as both an ultra-traditionalist, burdened by his obligations to Catholic Church custom, but able to orchestrate a most untraditional exit from the highest office. . It is these contradictions that make the visual experience extremely provocative. However, while trying to personalize one of the world’s most secretive and complex institutions, it eventually crumbles under the weight of its own promise.

The piece is indeed successful in its finery. The original music composed by Grammy and British winner Anne Dudley cultivated a rich soundscape in which hymns of prayer were immediately blended with songs like ABBA’s Dancing Queen, meaning there was no It was never quite possible to predict what was to follow. Coupled with Jonathan Fensom’s relatively simple yet versatile set, audiences were transported to the Sistine Chapel and the Vatican. Projections of Michelangelo’s fresco on stone pillars inside the theater created an intimidating, otherworldly atmosphere at times, especially as Lesser and Woodeson were staged as solitary figures amid extraordinary architecture.

The extinguishing of the bright flames and the extravagant and very precise religious costumes meant that the history of the Catholic Church was palpable. Dust and smoke continually circulated around the stage, engulfing the theater in the traces of time past.

Anton Lesser as Pope Benedict XVI and Nicholas Woodeson as Pope Francis portrayed two men with internal spiritual crises. Lesser and Woodeson complemented each other, showing the awkward but endearing relationship shared between Pope Benedict and Pope Francis. The couple sparked hordes of laughter from the crowd at the end of the prayers while inviting pity for the respective struggles of Benedict and Francis.

However, the difficulty with using humor as a lens to frame intense discussions is that it often fails to do the subject justice. Unfortunately, that was the case here. Establishing binary relationships, especially between the German Pope Benedict – a man of great intelligence and austerity – and the Argentine Pope Francis – an extrovert and non-conformist – initially served Dacre’s purpose. navigating the complicated and messy past of the Catholic Church. But the problem with binaries is that they quickly become predictable and very rarely display the complexity of truth.

The somewhat superficial attempts to answer the very question posed at the start of the play – the explicit reasons as to Why Pope Benedict XVI resigned – was an unsatisfactory conclusion. At times, it felt like Lesser was only beginning to scratch the surface of why his character behaved the way he did, offering vague justifications for his religious riddle.

Likewise, brief mentions of child sexual abuse within the Catholic Church seemed unexplored as they were introduced after moments of intense comedy and left relatively unquestioned. Sometimes I felt like the characters were too cartoonish. Their overly stylized accents became somewhat distracting to the rest of the production.

Dacre’s “The Two Popes” attempts to tackle complex religious baggage in a comedic and often light-hearted way. It definitely made for interesting viewing. But he failed to strike a meaningful balance between comedy and the harshness of reality.

We are therefore almost entirely dependent on advertising for funding and expect to have a few difficult months and years ahead.

Despite this situation, we will look for inventive ways to seek to serve our readership with digital content and of course also in print!

Therefore, we ask our readers, if they wish, to donate from as little as £1, to help cover our running costs. Thank you very much, we hope you can help us!