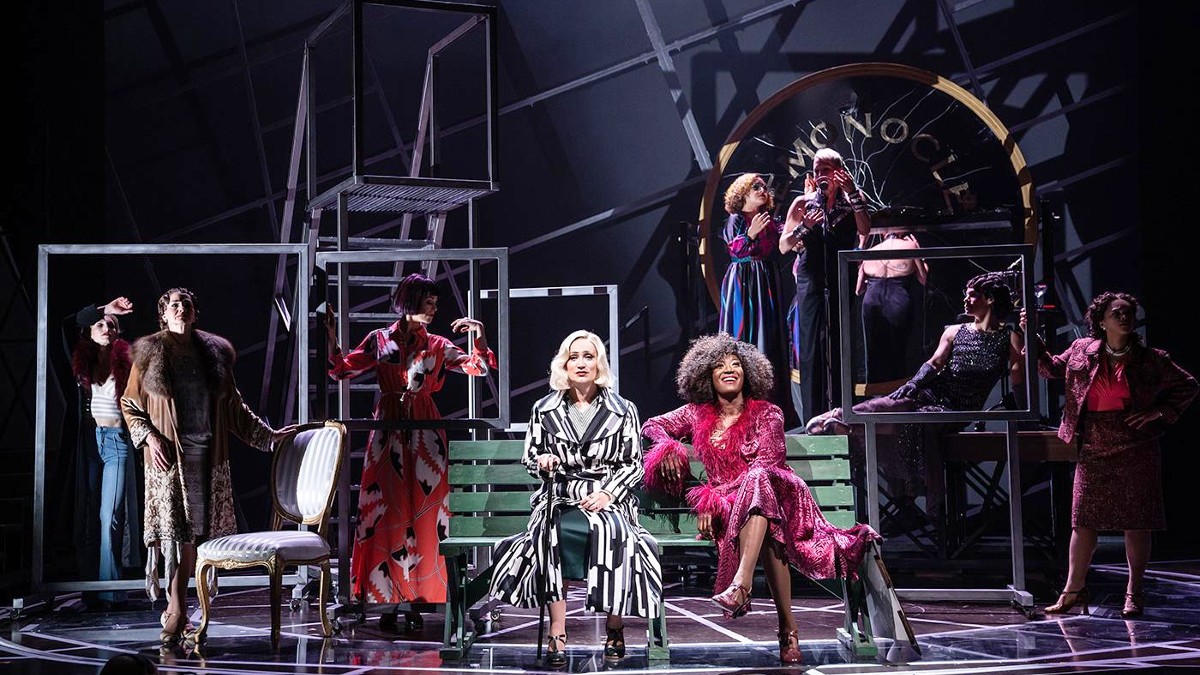 She lived a wild and tumultuous roller coaster life. Sometimes rich, sometimes poor. Both famous and forgotten. Art Deco artist, iconoclast and provocateur, tastemaker and pioneer, toast of Paris, New York and Hollywood, died in obscurity in Mexico, her ashes, at her request, were thrown into the living volcano Popocatépetl.

And now, 42 years after her death, she rises again, like a phoenix, with a new musical bearing her name, and her paintings fetching tens of millions at high-end auction houses.

She was Tamara de Lempicka (1898-1980), born Tamara Rosalia Gurwik-Górska in Warsaw, Poland, to a wealthy Jewish lawyer and Russian socialite.

She met her aristocratic husband, Polish lawyer, Tadeusz Lempicki in St. Petersburg, Russia, and married him a year later when she was 18.

In 1917, when he is arrested by the secret police, she makes the ultimate sacrifice to get him out. They escaped the Russian Revolution and found themselves refugees in Paris. In 1939, as the Nazi invasion threatened, she, still aware of her Jewish heritage, feared for her life and fled to the United States.

Again and again she had to reinvent herself. “There is a certain freedom in losing everything,” she says. “Forget what came before.” “The century is different, so why shouldn’t I be? »

All of that (and more) makes its way into the new Broadway-bound musical, “Lempicka,” which premieres on the East Coast at the La Jolla Playhouse.

An earlier version of the play premiered in 2018 at the Williamstown Theater Festival in Massachusetts. This show was slated for its 2020 debut at the Playhouse, but Covid forced a change of plans.

So here we are with a much-revised incarnation of “Lempicka,” which, despite being conceived by playwright/lyricist Carson Kreitzer circa 2010, before she met composer and co-librettist Matt Gould, seems closely related to Ellis Avery’s landmark 2012 novel, “The Last Nude”. The book, set primarily in Paris in 1927, is narrated by 17-year-old runaway Rafaela Fano, who was Lempicka’s lover and muse.

Tony Award-winning director Rachel Chavkin, whose beautifully stylized work was last seen locally in 2016’s ‘The Royale’ at The Old Globe, and the recent touring production of ‘Hadestown’, are associated in the project since 2014.

Lempicka (Eden Espinosa, with a powerful voice, especially in her deep and rich alto range) was a maverick, a radical. Not the most devoted of wives or mothers, she led a decidedly hedonistic life, dating high rollers and engaging in multiple affairs, with men and women.

She began to paint seriously in Paris, to support the family when her husband did not seem to adapt (“What is a man without a homeland?” he laments). Her second husband was Baron Raoul Kuffner (local stalwart Victor E. Chan), a marriage that earned her the nickname “The Paintbrush Baroness”.

Although this musical offers a rough glimpse into the arc of her eventful life, it mostly focuses on the energy and delirium that was Jazz Age Paris in the 1920s, and the sexual emancipation of women who were born.

We see Rafaela sometimes prostitute and cabaret singer (beautiful Amber Iman, who brings a quiet grandeur to the frenetic piece, with her sensual presence and breathtaking voice. From July 12 to 24, Ximone Rose will take over the role). As Lempicka’s muse, lover and obsession, Rafaela is resented by Lempicka’s husband (Andrew Samonsky) and daughter Kizette (Jordan Tyson).

We hear a little about Lempicka’s art (“Line, color, form, shadow and light”, reminiscent of the 1985 Stephen Sondheim/James Lapine musical, “Sunday in the Park with George”). She looks at a person and sees a color: “cobalt, prussian blue, cerulean, sapphire… crimson, scarlet, vermilion, rose madder”. But we don’t see much of his art (rights issues?).

We meet Lempicka’s toughest teacher/critic/antagonist, Filippo Tommaso Marinetti (George Abud), who tells him “We have to disturb, disturb the world”. The real Marinetti was the founder of the futurist movement, which decried the past and celebrated the modern, mechanical world. (He was also co-author of the Fascist Manifesto). He transforms into a Mussolini-loving blackshirt monster, reminding Lempicka of Hitler’s notion of “degenerate art” – “Jews and queers. You will be erased. The future is now and it’s mine. In the musical, he also shares Rafaela, much to Lempicka’s chagrin.

When she sees Marinetti starched and in uniform, Lempicka knows the party is over and she must leave Paris, where she had introduced Rafaela to a hidden speakeasy-like bar/cabaret, Le Monocle, whose motto is “Liberté , ‘Equality, Lesbianity.’ The (notorious) place is run by singer Suzy Solidor (Natalie Joy Johnson) who Lempicka also had an affair with, but not on this show.

We see how the artist struggles to be accepted in a man’s world; we briefly see his depression and attempted suicide.

But we never really get inside her head, or get a sense of what she’s really thinking and feeling. We are too caught up in the turbulence of the times and of production.

Chavkin is known for her multi-sensory sensibility, but she really outdid herself this time around, thanks to her design team and choreographer Raja Feather Kelly.

The intense focus on revolution, change, and the future is depicted in angular lines and rotating decor (Riccardo Hernandez), neon lights and flashing lights (Bradley King), and ever-changing projections (Peter Negrini ), both archival and artistic. It is a phantasmagoria of movement more than of art.

Even the sensuality is more suggested than shown. We see more Art Deco in the beautiful costumes (Anita Yavich) and production design than in Lempicka’s work – although the chilling cubist/neoclassical mix of her famous self-portrait, “Tamara in a Green Bugatti”, from 1929) dominates the set before the proceedings begin.

The score, excellently played by a 10-piece orchestra under the direction of Charity Wicks, echoes the general aesthetic: relentless energy, high volume, very pronounced belt (all this often making it difficult to discern the lyrics). The rock-infused metallic music is insistent and relentless, only toned down by Rafaela’s bluesy, scattered moments of welcome calm (“Stillness,” “Bracelet”).

There are stunning stage images and key pieces (“Love is for Fools”, “Woman Is”).

But with nearly three hours at a frenetic, feverish pace, the show could use more revision, condensing — and heart. And a lot more depth of character. Right now the room has the cold, hard surface of his paintings. It may be intentional, but it keeps us at an emotional distance.

This is a whirlwind tour of a subversive life, but it needs to breathe more and go deeper inside this driven maverick, a serial survivor who was keen to do things her own way, to to be seen and remembered.

Its prominent collectors include Madonna, Jack Nicholson and Barbra Streisand. Maybe now you’ll remember her too.

Pat Launer, a member of the American Theater Critics Association, is a longtime San Diego arts writer and Emmy Award-winning theater critic. An archive of his previews and reviews can be found at patlauner.com.