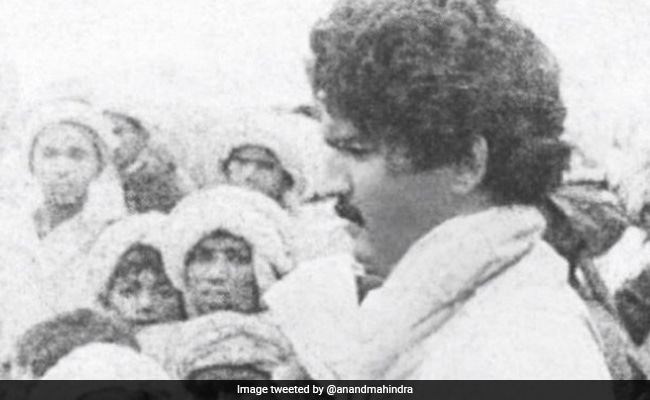 This billionaire industrialist was once a budding filmmaker. Any guesses?

Anand Mahindra in a throwback photo, taken near Indore.

Anand Mahindra is a name to be reckoned with in today’s business world – but few people know that the chairman of the Mahindra Group once aspired to be a filmmaker. Anand Mahindra, 66, took to Twitter this afternoon to share a rare throwback photo while revealing he studied film in college. The black and white photo shows a young Anand Mahindra with a 16mm camera held in his hand. It was taken many years ago in a remote village near Indore, Madhya Pradesh, the industrialist has revealed.

The subject of filmmaking came up when a Twitter user asked Mr Mahindra what his “ambition had been during school/college days”.

“That’s easy to answer. I wanted to be a filmmaker and I studied film at university,” Mahindra replied. “My thesis was a film I did at ’77 Kumbh Mela,” he further revealed.

Adding a bit of the throwback photo he shared, Mr Mahindra wrote: “This photo was taken while filming a documentary in a remote village near Indore. Is anyone old enough to guess which portable 16mm camera I was using?”

Easy to answer that. I wanted to be a filmmaker and I studied cinema at university. My thesis was a film I made at ’77 Kumbh Mela. But this photo was during the filming of a documentary in a remote village near Indore. Anyone old enough to guess which portable 16mm camera I was using? https://t.co/xmLuuLrv3Apic.twitter.com/oKCddQFyGf

The photo racked up hundreds of likes within minutes of being shared on the microblogging platform.

You certainly had an epic hairstyle sir. In the mood of time ????

Looks like a Bolex…my friend had one back in college

“Did Mira Nair click on this image? asked one Twitter user. Renowned filmmaker Mira Nair was Anand Mahindra’s contemporary while he was a student at Harvard.

Mr. Mahindra has often spoken of his love for cinema. In 2017, he said on Twitter that shooting his thesis film at the Kumbh Mela “was a seminal experience that made me realize that being Indian was part of a universal confluence.”

As a university film student, my thesis film was shot at the Mahakumbh in Allahabad, in 1977. It was a seminal experience that made me realize that being Indian was part of a universal confluence. So appropriate that it has been recognized as a Treasure of Humanity https://t.co/mTuQVNNatV

In a 2014 interview published in Mahindra Everyday magazine, Anand Mahindra also said that his love for cinema dates back to his childhood. “People often ask me why I chose cinema. I’ve always been a bit of a maverick and in a way I was rebelling against my situation,” he said. “Cinema was a chance for me to prove that I could create my own space and it was something that gave me great confidence in my innate abilities and served me very well throughout my life. “