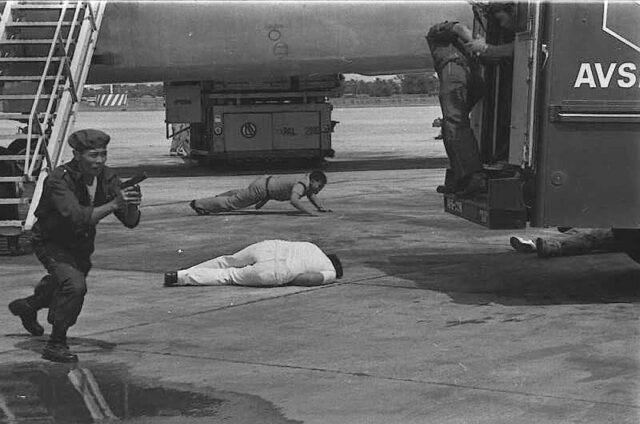 Other proponents of the name change have limited themselves to suggesting that the old Manila International Airport (MIA) be given its old name. But one doesn’t need a PhD to discern the motivations behind their stated reasons, which include the supposed need to familiarize international travelers with the name of the Philippine capital.

The explanatory portion of Teves Jr.’s bill states that “this bill was made during the time of the presidency (sic) of Ferdinand Marcos, Sr.”, therefore, “it is more appropriate to rename it (sic ) the person who has (sic) contributed to the idea and the execution of said noble project.

But as some journalists and news outlets were quick to point out, that wasn’t quite true. Construction of the old MIA began in the late 1940s and was completed in 1961 – four years before Marcos Sr. assumed the nation’s highest elective office in 1965.

What is true is that former Senator Benigno “Ninoy” Aquino, Jr. was murdered there by the dictatorship’s thugs when, despite the possibility of being arrested or killed, he returned to the Philippines from the United States on August 21, 1983. The MIA was renamed in his honor by an act of the Philippine Congress restored in 1987, a year after the “People’s Power” civil-military mutiny on Epifanio de los Santos Avenue ( EDSA) of Quezon City overthrew the Marcos regime.

Aquino’s killers and some of their immediate superiors in the military were eventually identified, tried, and imprisoned. But who was the mastermind behind the assassination has never been established. There are lingering doubts as to whether it was Marcos Sr., as he was far too shrewd not to have anticipated the public outrage and martyrdom of “Ninoy” Aquino, his murder, as well as his international repercussions. Unlike some of his successors, with whom he has been mistakenly compared, Marcos Sr. was smart enough to calibrate his responses to the problems he faced. There were even rumors at the time that he was furious when he learned of Aquino’s murder. Who ordered the murder is still one of those unsolved mysteries in the Filipino culture of impunity.

Nonetheless, it seems too much for Teves Jr. to suggest that the NAIA bear the name of Marcos Sr. Due to the political context at the time of Aquino’s murder, many suspected that his henchmen were responsible – a suspicion that was ultimately confirmed. by the conviction by a court of the soldiers involved. Even though he didn’t orchestrate it, Marcos Sr. was at least partly to blame as he couldn’t prevent it despite his vast powers.

But it falls far short of the facts that drive the name change game. Although they do not say so, Teves Jr. and his political cronies who campaigned to change the name of the NAIA want to erase from the little that remains in the collective memory of the Philippines any reminder not only of what the dictatorship of Marcos Sr., but also how direct action by the people through the civil-military mutiny EDSA 1 “People Power” overthrew him.

EDSA 1 has been hailed in many parts of the world as a great example of workplace democracy and has encouraged similar uprisings against dictatorships. But the political dynasties that control Philippine governance see its example and its possible repetition as threats to their interests, hence their determination to relegate it to oblivion limbo.

Beyond the immediate goal of fueling mass amnesia, however, the name-changing venture is just another way to further the “unity” mantra that the current president is obsessed with. is appropriated from the old Marcos. Marcos Jr.’s theme of “unity” during his campaign and after echoes his father’s emphasis on “Isang Bansa, Isang Diwa” (One Nation, One Spirit) during martial law. In both cases, there is implicitly a concept of “unity” based on conformity and respect – however limited and simplistic – for the thoughts, values ​​and ideas of the political class, its clones, of its substitutes and its instruments such as the police and military.

Marcos Jr.’s non-engagement with his presidential rivals during the campaign was made public as part of his commitment to national “unity.” It was vague enough to be interpreted by many sectors as reflecting their own aspirations for a better society. But it was actually based on the assumption that these views different from his own have no value – they divide rather than unite – and are therefore unworthy of recognition, let alone discussed. Equally invalid from the point of view of this concept is what actually happened in the story, such as the assassination of Aquino at the MIA of the time. What counts is the version of the dynasts’ past, whatever the facts say.

Authentic unity is based on a diversity of points of view, from which can emerge a common understanding of the nation’s aspirations and how to achieve them. It is precisely to encourage the diversity of perspectives, interpretations, opinions and policies that can lead to the development of an inclusive national agenda that the Constitution protects free speech, free speech and freedom of the press.

But this is unacceptable to the Filipino ruling elite, whose main objective has always been to gain power and keep it at all costs. The same contempt for diversity is evident in the intolerance of the police, military and bureaucracy towards those who hold views different or contrary to those of their bosses and their demonization of them. Hence the forced suppression of freedom of speech and freedom of the press in an effort to purge from the collective consciousness any awareness of what is happening and what has happened before.

Rewriting history is one way to do this. What seems unprecedented is the extent to which conformity heralds have disparaged even the country’s historians and other social scientists. This happened before, in the 1950s, when scholars and academics were persecuted for holding different views from government officials in a campaign to force them to join their voices with those of the mob.

In his 1951 novel The Conformist, the Italian novelist Alberto Moravia described how the fascist regime in his country was based on coercing its main followers and adherents into being part of a thoughtless herd – and on the fact that they coerced everyone else to be the same in their lives. politics, their social life and even their person.

The rationale for this was the supposed need for “unity” which those with authoritarian leanings claim is necessary for a society to achieve its aspirations – which they presume without defining what it means for “greatness”. The same appeal to ultra-nationalist sentiments was, and is, not incidentally as present in Marcos’s two regimes (“This Nation Can Be Great Again”), as was also the case in other authoritarian populists such as Donald “Make America Great America” ​​in the United States. Again” Trump, the Brazilian Jair Bolsonaro – and long before, the German Adolf Hitler and the Italian Benito Mussolini.

A reproduction of blind conformity and blind obedience is underway in the Philippines, where the ruling elite and their minions view dissent and the diversity of viewpoints necessary in a democracy as a vice rather than a virtue. Instead of unity in diversity, what the oligarchy wants is unity in conformity.

Life was a circus for Barnum & Bailey’s partner