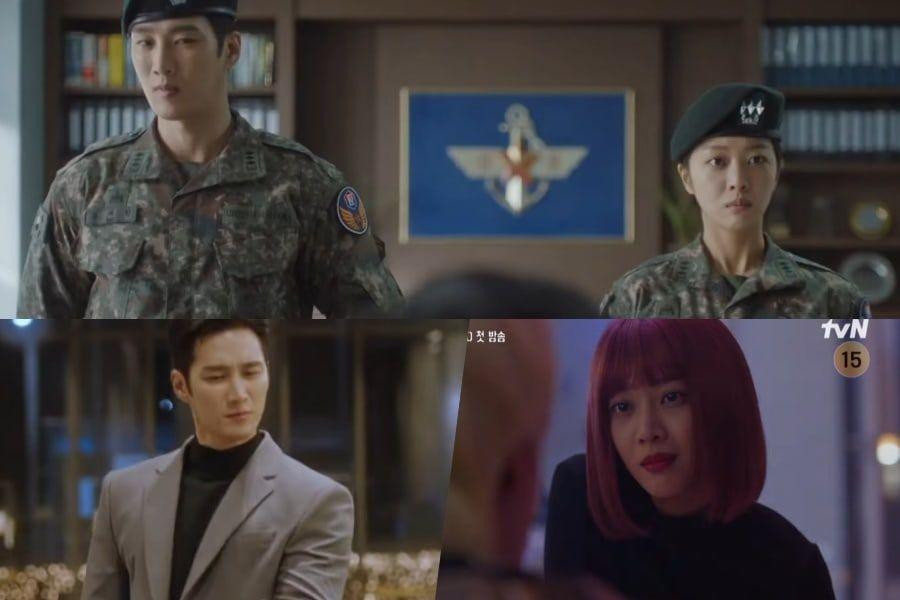 tvN has released an exciting teaser for “The Doberman Military Prosecutor”!

“Military Prosecutor Doberman” is about two military prosecutors who choose the job for very different reasons, but end up banding together to fight evil in the military. Do Bae Man (Ahn Bo Hyun) is an indifferent prosecutor who doesn’t care about his job and only looks forward to the days when he can take off his military uniform. On the other hand, Cha Woo In (Jo Bo Ah) is the only daughter of a chaebol family who chooses to become a military prosecutor out of revenge.

The preview for Episode 1 shows that Do Bae Man and Cha Woo In are off on the wrong foot. As two people with completely different goals, their tension is inevitable. The teaser begins with Do Bae Man showing his delight at Yong Moon Goo’s (Kim Young Min) offer to become a partner at a huge law firm after serving in the military as a prosecutor for five years.

Later, Cha Woo In sees him coming in the hallway and politely greets him, but he walks past her without even glancing at her, saying, “I’m in the middle of an interrogation.” Her eyebrows furrow in disgust and she frowns at his impudence.

Do Bae Man and Cha Woo In meet at the office where their superior says to him, “You are a soldier!” She doesn’t hesitate to say, “But I’m still a prosecutor. When they walk out of the office, they face each other with growing tension, and she says boldly, “You’re not going to leave the army anyway?”

The video also shows a glimpse of Cha Woo In with bright red hair as she gives off a completely different aura from before. Bae Man’s voiceover asks, “Cha Woo In, why did you become a military prosecutor?”

“The Military Prosecutor Doberman” premieres on February 28 at 10:30 p.m. KST. Watch the teaser below!

In the meantime, discover Ahn Bo Hyun in “Yumi’s Cells”:

How does this article make you feel?

Telefnica SA: Telefnica opens its MWC stand in the metaverse