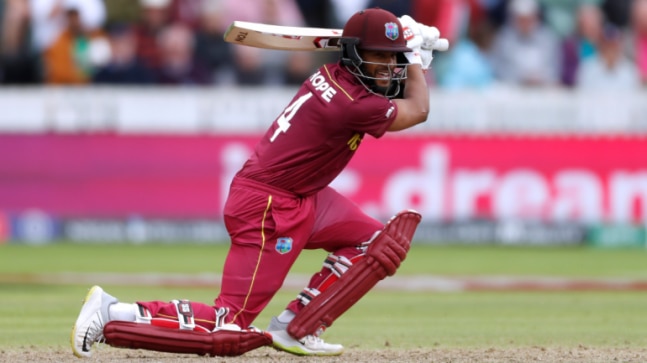 West Indies v India: Shai Hope on scoring one hundred in 100th ODI with stiff back – It was tough there

WI vs IND, 2nd ODI: Shai Hope scored a century for 125 and helped West Indies score 311 for 6 after opting to strike first at Queen’s Park Oval.

Shai Hope from the West Indies. Courtesy of Reuters

Right-hander Shai Hope on Sunday smashed a 125-ball century and became the 10th batter to score a century in his 100th ODI. He also became the fourth West Indies batter to reach the milestone after Gordon Greenidge, Chris Gayle and Ramnaresh Sarwan.

In the second ODI against India at Queen’s Park Oval in Port of Spain, Trinidad, Hope scored 115 runs on 135 balls assisted by eight fours and three sixes. Following his shot, West Indies went a decent 311 for six of 50 overs after opting to strike first.

Hope came out in the penultimate trying to crush Shardul Thakur for a limit. After playing the masterstroke, Hope said he didn’t find it easy because he had back problems.

“Playing 100 games for West Indies and scoring 100 in my 100th ODI means a lot to me. My back was stiffening up a bit and it was tough out there,” Hope said during the half-innings break.

Hope said he was desperate to convert his start and get a substantial score under his belt. The batter felt the pitch showed signs of an indifferent bounce.

“It’s a good score on this field. It was all about getting in, I haven’t had a start like this in a while, so I wanted to capitalize on that and do some runs. It’s not what it is, it’s a good score and some balls stay low, the spinners will come into play,” he added.

The daily cartoon and the live briefing: Sunday July 24, 2022