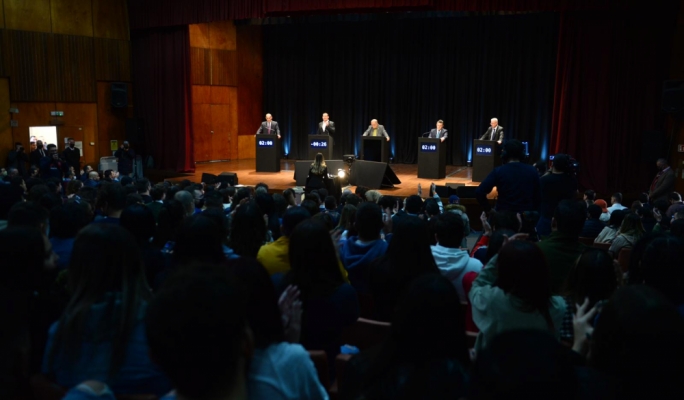 Why should political debates be transformed into mass meetings?

I guess we should have seen it coming.

“Ormai”, as the saying goes, we should be used to the fact that campaign debates never really bear their name, but end up being a very loud tour to demonstrate partisan support for their favorite politician.

It all started with the Xarabank format, which at election time turned every debate into a gladiator-style arena, with roaring spectators. This continued in 2008 with the infamous college debate where Alfred Sant was ambushed and booed by a clearly one-sided audience and continued in 2013 when MCAST students did the same to Simon Busuttil. This tit-for-tat behavior is now wearing thin with much of the public, and the proof is in the indifference shown towards the debate; the majority were clearly not interested, and those who tuned in quickly turned it off.

Organized by the Malta University Debating Union (MUDU), participation was limited to University of Malta and Junior College students only, and registration had to be done through the University’s eSIMS portal.

I’ve been told that requests for places poured in so quickly that the site crashed. It was easy to see what had happened: those who have the most interest in attending these debates are those who are already very politically active, usually from diehard families who occupy as many seats as possible to make their presence felt. It is a show of force encouraged by both the Labor and Nationalist parties. Students who do not belong to either of the two political formations of the University/Junior College, offshoots of the major parties, namely Studenti Demokristjani Malti (PN) and Pulse (Labour), are left behind. SDM and Pulse have so hijacked the political discourse in these institutions (essentially mimicking what is happening at the national level) that anyone who thinks differently is simply not represented. Unfortunately, likely due to a lack of resources, smaller alternative parties have never been able to make enough inroads with this demographic to attract substantial numbers of young people on board their respective platforms.

The result is that many disenfranchised students avoid politics altogether while leaving the door open for both well-funded parties to sink their claws into another brainwashed generation. It still surprises me after so many years that it is taken for granted that one has to support PL or PN. For many people, this is what il-politika means, rather than the politics with a small ‘p’ which are the politics that govern our daily lives. Are students taught political ideology and what it means to be right wing, left wing and the various degrees in between? For if they are, that knowledge is certainly not reflected in these debates, where one would expect a critical and questioning audience rather than one who seems content with the status quo.

In most countries, it is the students with their fresh idealism who are the catalysts for change, who demand a better country and who challenge and challenge politicians. But here you either get those who have completely ignored politics, or those who clap wildly when Abela or Grech open their mouths to announce more freebies. The voice of reason during the debate, Carmel Cacopardo, spoke sternly about handing out cash like it was Christmas while a war was going on, but sadly no one in that audience was really listening.

Some said that the students should not be blamed for this state of affairs, because they are only the product of this politically immature society. That may be true; just as it’s true that our education system doesn’t exactly encourage speaking up, going against the grain, or (heaven forbid) contradicting your professor for lecture.

Decades of being fashioned into good, obedient little students who memorize facts by heart to regurgitate them for an exam have crushed many free spirits. Sometimes I think that the free, creative, artistic and innovative spirits who manage to flourish in Malta are nothing short of miracles, because they do so despite the rigid academic curriculum. Everything in the system seems to be geared towards making students conform, and rebellious streaks or doing things differently rather than “like we always have” are frowned upon. (In fact, even if we try to act as if it has become so liberal, Maltese society in general is still very conformist and it takes a lot of determination not to get discouraged, to force you to do things like everyone world, because “that’s what everyone does”).

But back to the debate. Hopefully, if MUDU decides to hold another one, they will control the audience a bit more. Anyone directly affiliated with a political party should not be allowed to attend in order to encourage more uncommitted students to attend. We see enough political rallies like this, where the public simply follows its leader like loyal Labradors. The model of how political debates must be broken and the only way to do that is to do things differently.

From immature to downright childish When politicians are invited to talk shows, they inevitably try to score political points. However, in an effort to supposedly impress viewers at home, they also sometimes revert to childishness with childish digs that have no place in politics. Minister Julia Farrugia Portelli mocked new PN candidate Julie Zahra for her inexperience, saying “we don’t sing on a stage here” (referring to her past as a singer). Ironically, this happened on the eve of Women’s Day – what happened to the idea of ​​“raising other women”?

On Facebook, former PL singer and candidate Lynn Chircop was then quick to point out that the PN had similarly condescended to her during a previous election campaign because she was a singer of Eurovision. These types of retorts to tear down opposing candidates aren’t funny or witty. I just wish everyone would grow up and stick to debating issues.

However, the candidate of the week (for all the wrong reasons) must surely be Ray Abela vying on the PL ticket. He decided it was a good idea to visit an elementary school in his neighborhood and distribute virtual reality headsets to children. Now let’s see if you can count how many laws/regulations governing election campaigns he was able to break in one fell swoop. He used children’s faces in his photos for campaign purposes, expressly going against the standards set by the Children’s Commissioner.

They wore their school uniforms, thus also identifying the school. It’s not clear if he got permission from their parents to post their photos on his page, so he probably breached data protection as well. It is also unclear if the school principal was aware of anything that was happening outside the school gates. Worse still, this candidate gave a substantial gift to each of the children, which is a blatantly corrupt practice under the General Elections Act. On his Facebook post, he also brazenly promised to go to other schools to do the same.

When this was all reported on social media, the post was deleted, but I would like to know if the Electoral Commission has done anything about it. The question begs itself: if this candidate does not hesitate to act in such an unethical way when he has not yet been elected, what will he do if he is elected? ?